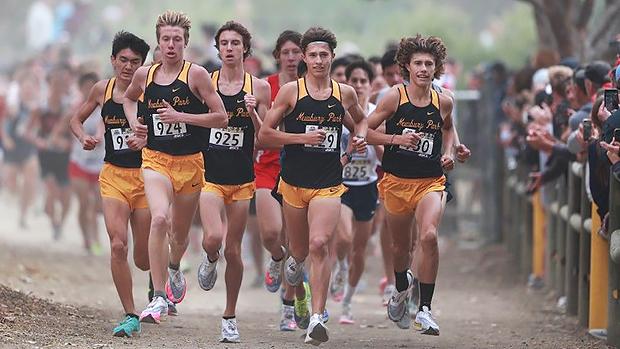 Newbury Park went 1-6 with an unprecedented 15 points to win the Division I title at the Southern Section Championships. What do these uber-talented Panthers have in store for Saturday's CIF-State Meet? (Raymond Tran photos)

Two years ago, Buchanan's girls pulled off the 67-71 upset over Great Oak in one the closest meets in the history of Division I. Led by Corie Smith's 17:00.0 second-place finish, and then-freshman, Sydney Sundgren's sixth-place finish, Great Oak found itself playing catch-up. Despite the Wolfpack placing their sixth in front of Buchanan's fourth, they could not overcome Buchanan's front-end strength, bringing an end to their streak of seven consecutive state titles. Meanwhile, Saugus placed third at 136 points. Placing in fourth as a team was Canyon Crest Academy, headlined by overall champion, Carlie Dorostkar's 16:45.4.

On the boys' side, it was an absolute jailbreak with Great Oak romping to a 98-point, 46-144 win over runner-up Jesuit. The real battle in that race was which squads would share the podium with Great Oak. In a tight contest, Jesuit outlasted Bellarmine Prep by one point at 145 with Dublin in fourth at 159. It was the first time that the Southern Section only earned one place in the top four. Jesuit's Matt Strangio left the field in his 14:43.5 state-title run with Clovis North's Isaiah Galindo crossing for second in 15:00.5. In earning their six consecutive team title, Great Oak led with Chris Verdugo's seventh-place finish (15:09.4) with their fifth scorer crossing less than 17 seconds later at 15:26.1!  Their 76:26 stands as the fourth-fastest State Meet team performance going into this weekend. This year's race in Division I could very well rival what we saw two years ago when Buchanan held off Great Oak for the four-point advantage in earning the State Championship.  This time though, Newbury Park is the Bears' foe while both have already met up twice.  With Buchanan ranked sixth and Newbury Park, eighth in the nation, this is a true clash of the titans!

At the Clovis Invite, the Bears ran to a 57-64 victory overcoming a runner-up performance to Newbury Park at the Woodbridge Invite.  Buchanan is headlined by juniors Sydney Sundgren (17:35.2) and Grace Hutchison (17:39.5), who shined with personal bests at the Central Section finals.  While freshman Elliana Lomeli (pictured with Hutchison and Sundgren above) raced faster at the Invite (17:56.3), freshman Sierra Cornett (18:13.4) and an ascending Caroline Mendyk (18:16.9) both posted personal bests last week. Mendyk was their fourth scorer from the 2019 State title squad.

to win the race, while Ailish Hawkins and Tiffany Sax also finished in the top 10 at last weekend's CIF-SS Final. Both went 17:45.9 and 17:57.0, respectively, on the Woodward Park course in October. Seniors Morgan Nygren and Lexi Darley will be the difference if the Panthers are able to pull the slight upset in earning the title over Buchanan.

In only scoring 30 to capture the Sac-Joaquin Section, Oak Ridge witnessed a step-up performance with their fifth-place finish at the 2019 State Meet, but this year, they have developed quite nicely and all projections point to a third-place podium

finish.  Ranked No. 15 in the nation, seniors Kayla Rutz and Ava Maier (pictured) have guided the scoring up top, but watch for the improving Samantha Liaty to play a huge role in this squad proving to be on top of the podium before they go back home.

The San Diego Section champion, Torrey Pines, and the Southern Section runner-up, Great Oak, will lock up for the battle for fourth place. While Great Oak features junior Kelli Gaffney (pictured below) up top, the talented cast behind has fluctuated more than any other program highlighted here.

Torrey Pines counters with Scarlett Taylor and Annika Salz up in front but their third scorer, Emma George projects to be the difference as both these squads look to chase down Oak Ridge for a podium spot.

Behind them, watch for ascending Vista Murrieta and the Central Coast Section champs, Dougherty Valley next up in possibly leapfrogging the two programs above and moving up for a top-five finish. Meanwhile, also watch Clovis North, Redondo Union, and Del Norte as this should fill out the top 10 squads once the dust settles.

Huntington Beach and Corona Santiago are squads making their first State Meet appearances and will battle along with Chino Hills, making a fourth trip to State, as the Southern Section looks to avoid only having four squads finish in the top 10 for the first time in State Meet history. 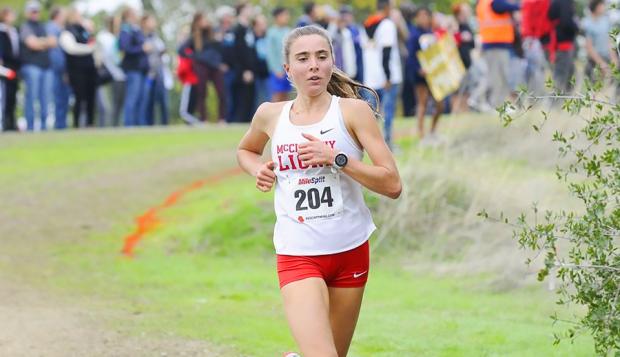 Newbury Park's Sam McDonnell is the heavy favorite and looked very much in control in her 16:50.5 wire-to-wire victory at the Southern Section Championships.  Saugus senior Isabella Duarte played runner-up in her 17:17.3 performance while Great Oak's Kelli Gaffney came through at 17:27.7.  Meanwhile, junior Anna McNatt of McClatchy (pictured) captured the Sac-Joaquin section championship and will battle Duarte and Gaffney.

Coming off a monster step-up performance last weekend, Vista Murrieta's Isabella Smith will look to duplicate her performance while also keeping track of Quartz Hill's Brianne Smith and Redondo's Lyla Fedio. With the background of the team title bearing down, the Buchanan duo of Sundgren and Hutchison will also seek top-five finishes and hold off Newbury Park's Hawkins and Sax.

Also, do not discount Rancho Bernardo's Jacey Farmer (pictured) who is coming off the capturing the San Diego Section title. In that same race, El Camino's McCall Dame placed just behind Farmer. For the boys, seemingly every headline has led with the men from Newbury Park, and deservingly so!  The Panthers pulled off a feat that no one ever saw taking place at the Southern Section finals in sweeping the top six spots at the Division 1 Finals!  There is no team in the nation that can touch them (ever!) and this weekend, the only four goals lie ahead of them:

We have them slated to win by more than 150 points!

The 1993 Thousand Oaks squad scored a minuscule 23 points to hold the current team score record while Great Oak's 98-point victory in 2019 was the greatest margin of victory. Newbury Park shattered its own course record last month for the Woodward Park course in an astonishing 73:39 and actually project to break it once again!

With Daniel Appleford's development over this past month, the crew could very well

Oh, and there's that little thing about the individual course record of 14:24 set by German Fernandez of Riverbank (SJ) in 2007.

Is that a goal?

"Yes," Colin Sahlman said Saturday. "Our coach and I have talked about that. We want all four under the course record. Only time will tell. I think it would be very special. I personally think we could have four guys under that. We'll see."

We are out of superlatives at this point.

come in off their best performances of the season with Great Oak earning a slim 96-102 advantage.  Loyola senior Richard Moreno was the fastest non-Newbury Park boy at 15:03.3 with his quartet all crossing in an eye-popping eight-second bubble in the 15:30s. Great Oak countered with junior Ramses Cortes at 15:11.6 and while twins Cameron Smith (15:23.5), and Carson Smith (15:29.1) came up big with lifetime best performances to overcome an off-day from junior Mark Cortes.

Meanwhile, Crescenta Valley held off San Clemente for fourth place. As both of these squads did not have their best performances and project to run better this weekend, trying to break up the Southern Section five will be challenging. While the Falcons open up with Rowan Fitzgerald and Parker Simmons shooting for top-ten finishes, the Tritons front trio, led by Juan Chantaca, looks to stay close to these two.

With that, we have the battle for sixth place within a 20-point bubble, but with FIVE

squads all battling with one another. Dublin is coming scoring a perfect 15 in sweeping at the North Coast Championships, while Jesuit comes in off their Sac-Joaquin championship!  Coming back to a familiar course, Madera South and Clovis West will reunite as the former earned the Central Section title at Woodward last week. Finally, and no disrespect to the Palo Alto squad that earned the Central Coast Championship and pulled off the upset on the sixth scorer, we expect Bellarmine Prep to bounce back and fight within this group as well. If it could not get any tighter, do not be surprised to see Vista Murrieta of the Southern Section potentially break up this group of five and earn a top-ten finish. Can anyone break up the Newbury Park crew?  The two boys that project to possibly do so are Clovis junior Chris Caudillo, and Davis Zach Ayers.  Both crossed together at 15:00.0 at the Clovis Invite last month (photo above) and on paper, will be looking to place ahead of NP's fifth scorer and break up the monopoly.

But Caudillo qualified as an individual and will not disrupt any scoring possibilities of NP dropping a second consecutive perfect 15.

Aside from those two, Millikan sophomore Jason Parra rode the Newbury Park pace as long as he could last week in qualifying for the State Meet as an individual in 15:05.6, just right behind Loyola's Moreno. Crescenta Valley's Rowan Fitzgerald closed well in his 15:07.1 effort.

Other top section finishers to watch include senior Braden King, runner-up to Ayers in the SJS while leading Jesuit to a 13th section D-I title, senior Daniel Trampe, who won the North Coast Section title while leading Dublin to a perfect score, and Carlmont senior Aidan Dimick, the CCS champ.

Mark Gardner is a teacher, former coach, in-demand announcer, and regular contributor to MileSplitCA as the Southern Section editor.