The Granada boys are packed up and looking strong heading into the Division II race at the CIF-State Cross Country Championships. (DeAnna Turner photo)

Newbury Park, now in Division I, swept the D-II team titles in 2019.

This year's senior star for Newbury Park, Colin Sahlman, placed fifth in 15:09.80. Then-junior Nick Goldstein placed 10th and current senior Daniel Appleford was 24th/19th among scoring runners as the Panthers set a course team time record of 75:28 (since broken at this year's Clovis Invitational) and a D-II points standard of 37. The top six teams were all from the Southern Section, in order: Dana Hills, Claremont, Loyola, Redlands East Valley, and Thousand Oaks.

In the girls race, sophomore Alexandra Klos of Vista del Lago (SJ) was a 22-second winner, running the 5K Woodward Park course in 17:13.10, which ranks No. 6 all-time for a girl in D-II at the State Meet. Colony (SS) junior Amber Rios placed second and Presentation (CC) senior Gianna Mendoza was third. 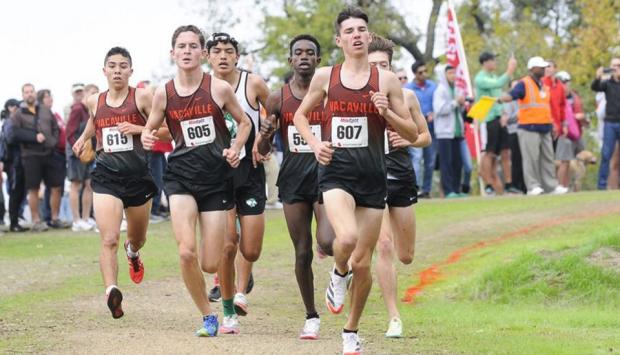 Granada comes in as the boys team to beat while Mira Costa is the favorite in the girls team race.

Granada, the first non-Southern Section school at the 2019 meet -- placing seventh -- is coming off a 48-point victory over Monte Vista at the NCS meet where it gapped at 25 seconds with a 1:18.18 team time. In that race, Granada put five among the first 11 across as junior Roland Ruckmann-Barnes placed second, junior Dheeraj Gurusamy placed sixth, senior Jacob Bauman was eighth, junior Farin Soriano was 10th and junior Liam Manley was 11th.

Granada has been impressive throughout the fall, winning the Amanda Garcia Invite with 27 points and a 17-second gap while beating NCS D-I winner Dublin. Granada won at De La Salle with 68 points and a 41-second gap, beating the likes of top D-I teams Dublin, Jesuit, Davis, and D-III favorite Campolindo. At Roughrider, on the State Meet course, Granada posted a perfect 15 with a 26-second gap and 79:43 team time. In comparison to the larger Clovis Invitational also held at Woodward Park six days before, only seven teams went under 80 minutes and none were from D-II. Sanger was a 1-point winner over a strong San Luis Obispo team in the Central Section final conducted at Woodward. Sanger is strong up front, which helped overcome an SLO team, led by junior Milo Skapinsky and senior Lewis Westwood, that had a better team time (80.08), scoring gap (29 seconds), and put five across in the top 10.

Mira Costa's boys gapped at 26 seconds in winning a divisional title for the first time since 1969, beating Ayala by 16 points in the Southern Section. Ventura, Claremont, Hart, Dana Hills, and Santa Ana Foothill also advanced out of CA's largest section.

Grossmont topped Mt. Carmel in a close battle for the San Diego Section title with a 40-second gap and 79-minute team time on the just-under-3-mile Morley Field course. Mira Costa put three among the top nine in holding off Anaheim Canyon, Claremont, and Dana Hills to win the Southern Section title but did so with a 2:28 gap. Dalia Frias, the section champion, and Ella Parsley (pictured), both seniors, and junior Anna Chittenden lead Mira Costa, which is looking for the program's first title.

Canyon may have something to say about that. Only nine points back, this group gapped at 59 seconds led by seniors Emma Hadley and Isabella Frisone, and sophomore Makena Oliva, who placed 11-12-15, respectively. This will be the third time on the line at State for Hadley and Frisone. Hadley was ninth as a freshman and 10th as a sophomore.

Claremont, which had a scoring gap of 1:48 in placing third, is led by sophomore Jie Yi Denise Chen, who placed sixth, and Maddie Coles, who placed eighth. Coles is making her third trip to State where she was the division runner-up as a freshman and placed 22nd as a sophomore.

Junior Allura Markow, eighth at State as a freshman in 2019 and the No. 2 returner from that race, leads Dana Hills. Sanger put five among the top 10 for a runaway victory for the Central Section title. Senior Nia Lamas led the way with a runner-up finish, followed by junior Leah Mendibles, senior Sienna Bianchi and senior Nereyda Alvarez, who placed 4-5-6, and junior Anayacsi Diaz, who placed 10th. Dana Hills senior Jai Dawson, the Southern Section champion, was sixth here as a sophomore and is the top returner still in the division. Dawson showed patience and maturity in his approach on the Mt. SAC course last week, biding his time before pulling ahead to run the fastest time on the course that day, 14:55.2.

The group of challengers to the Southern Section party starts with the senior Sanger duo of Emanuel Salas and David De Loera, who went 1-2 in the Central Section. Salas went 15:31.95 and appeared to have a lot left for this week. De Loera was some 10 seconds back.

Junipero Serra senior Tommy Rogers is coming off a CCS victory at Crystal Springs where he was one second faster to the line than Willow Glen junior Casey Nuti.

Pitman senior Damian Garcia was an eight-second winner over Ponderosa sophomore Joshua Chu in the SJS final on the Willow Hills course. 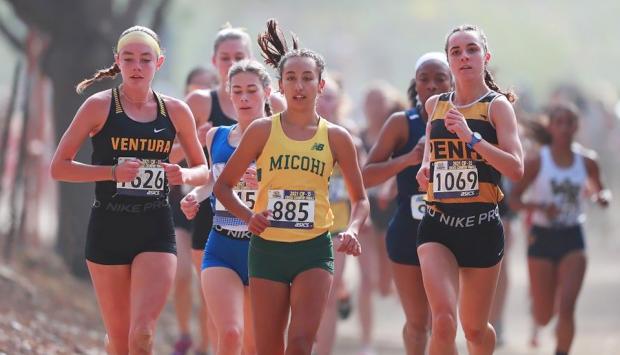 The Southern Section final displayed three of the state's elite runners by class, Mira Costa senior Dalia Frias, Peninsula junior Aishling Callanan, and Venture freshman Sadie Engelhardt (pictured). That was the order of finish with the Nos. 1-3-5 fastest times at the meet. That very well could be how the race this week plays out.

As a reminder, Engelhardt placed a close second to D-I champion Sam McDonnell of Newbury Park at the Clovis Invitational, running the Woodward Park course in 17:02.30. That's easily the fastest 5K this season in D-II.

Sacramento St. Francis senior Cate Joaquin was fourth here as a sophomore and is the top returner from 2019. She was third in the SJS final behind Whitney junior Katie Kopec, who was 24th here as a freshman, and Granite Bay's Foster.

Markow was eighth at State as a freshman in 2019.

Vista del Lago (SJ) senior Alexandra Klos, who won the 2019 title as a sophomore with the sixth-fastest time in D-II history, is an elite soccer player headed to Santa Clara who dropped cross country this season to focus on her primary sport. Others who figure to challenge for top-10 spots include Canyon's Frisone, the Claremont duo of Chen and Coles, Mira Costa's Parsley and Chittenden, the Poway duo of Rogers and Buswell, the top two from the Central Coast Section in Pioneer senior Bella Peretti, the CCS champion, and Prospect freshman Kylie Hoornaert (pictured), Central champion Charlotte Castelli, a senior at Paso Robles, and this trio of seniors from the SJS: Tatiana Cornejo (St. Francis), Leila Swenson (Bella Vista) and Natalie Wieland (Ponderosa).