This year's Central Coast Section championship will once again be held at the world-famous Crystal Springs course. The course has been under attack the past few years due to some concerns from neighborhood traffic that the meets at that course attract. Hopefully, the course will be around for many more years but in the meantime, here is a bit of history lesson about the section final since its inception in 1965.

The first Central Coast Section (CCS) meet was held in 1965 at Vasona Park in Los Gatos. The next competitions were held at the locations listed below until 1977 when the Crystal Springs course became the yearly host of the meet except for the rain-delayed section meet in 1984 which took place at the College of San Mateo. 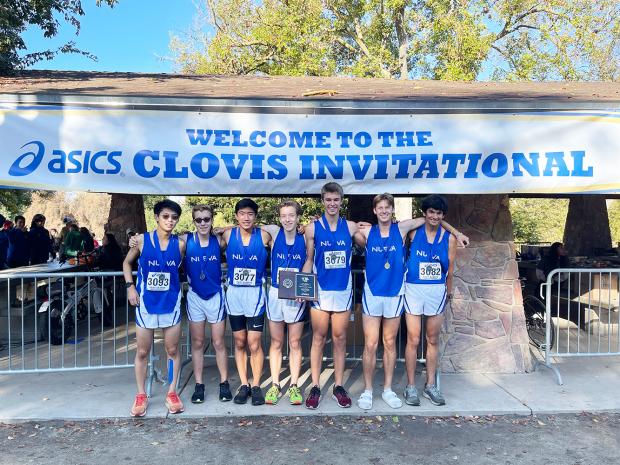 Boys Division V (Top 3 teams qualify for CA state XC meet)
The Crystal Springs Uplands School boys have won the last six section titles in this division. They have had lots of close calls including a 6th man tie-breaker in 2015. This year will be no different with their toughest challenge to date, Nueva. The senior-laden Mavericks have been impressive this year with wins at the Serra and Clovis Invitationals as well as easily winning the PSAL last week. They have a strong group up front with Emerson Lange, Joshua Byun, Davis Turner, and Alex Cocquyt. The Gryphons are a super young team with four freshmen and two sophomores in their varsity lineup led by junior Furious Clay. They finished in 2nd place behind a strong Menlo team at the WBAL final. Priory looks to be the next best team and will be aiming for another state meet berth for their program. The individual favorite will be York senior Michael Julian. He has been quite impressive this fall and could run a time in the first race that will be tough to beat by all the divisions that follow. Chasing Julian just like he did at their league final will be St. Francis CCC senior, Julian Vargas.
. Girls Division V (Top 2 teams qualify for CA state XC meet)
The Castilleja girls won the last section titles in 2018 and 2019. They will be favored to once again win this year as they have the best trio of runners in the field. Led by WBAL MVP Perry McElhinney, the Cubs also have Samira Kennedy and Daniella Henderson who could potentially take the top three spots. Nueva will keep Castilleja honest with their strong pack as they chase more CCS hardware. The Crystal Springs Uplands School girls will be aiming for a top-three finish which would secure a state meet berth for them. The individual favorite will be McElhinney with a challenge from her two teammates as well as 2019 section champion, Kaiya Brooks of CSUS. Boys Division I (Top 3 teams qualify for CA state XC meet)
The longest winning streak of 7 CCS titles in a row belongs to the Bellarmine Bells who have won the last seven Division I section titles. Their teams in the last two years may have been the best we have seen in our section's history which included a team time record on the Crystal Springs course. This year, Bellarmine has had to reload following the graduation of much of their varsity in 2020. They typically have around 180 boys on the team so depth has never been an issue for the Bells. This year's race will definitely be a challenge for them with strong competition from Palo Alto and Mountain View. The individual favorite will be Carlmont senior Aidan Dimick who rolled to a 15:05.7 personal best to win the PAL title. His closest challenger will be Emmanuel Leblond of Mountain who ran a sub 15:20 at this league final. Girls Division I (Top 2 teams qualify for CA state XC meet)
This division has always been the most competitive one in the section and this year will be no different. The top two teams overall in the section will race each other to determine who is the best. The Menlo Atherton girls have been impressive throughout the season and just recently steamrolled the PAL competition to win another league title. They will be favored over the next beat team, the Los Gatos girls who have been just as impressive winning titles at several high caliber Invitationals and champions of the SCVAL. The next group of teams that will be a factor as well includes Los Altos, Palo Alto, and Mountain View. The favorite to win the individual title will be Palo Alto junior Elizabeth Fetter. She will need to stay ahead of the top two Los Gatos runners, Shea Elmore and Sophie Tau.
Boys Division II (Top 3 teams qualify for CA state XC meet)
The last boys' PAL team to win a section title was the Half Moon Bay boys in 2015. This year, another PAL team will have an opportunity at this section title. The Woodside boys have been impressive all year and after their PAL title appear to be the favorite here. They will be challenged by one of the dominant teams in this division over the years, the St. Francis boys. Another team that will be in contention is Wilcox which finished a very competitive 3rd behind Paly and Mt. View in the SCVAL final. Also in contention will be the Lynbrook boys as well as the Branham, Archbishop Mitty, and Pioneer teams. The individual favorite in this division will be Serra senior Tommy Rogers. He has been impressive on the Crystal Springs course including a league victory last Wednesday in the always tough WCAL. Girls Division II (Top 3 teams qualify for CA state XC meet)
The St. Francis, Mt. View girls had the best team in the section in 2019 which resulted in a 2nd place finish at the California state meet behind emerging national power Newbury Park. This year, the Lancers still have a potent lineup and will be favored to win the section title for the 3rd time in a row led by WCAL champion, freshman Sabrina Zanetto. League rival Archbishop Mitty seems poised to finish in second place with Lynbrook and Willow Glen battling for the last state meet qualifying spot. The race for the individual title should be a good one and a trio of runners are in the mix for the win. Prospect freshman Kylie Hoornaert has had a spectacular debut season in cross country and recorded a time of 17:59.1 at her league final. Right on her tail will be Woodside senior Elle Marsyla who won the PAL title with a time of 18:02.7. Pioneer's Bella Peretti will also be in contention as she chased Hoornaert at the BVAL final and recorded a personal best of 18:07.2. Boys Division III (Top 2 teams qualify to CA state XC meet)
This is always the mystery division that could have a team not even on the radar come through for the win. It is very hard to pick a favorite so I will go through my list of contenders. The first is a team from the SCCAL, the Santa Cruz boys. They will be led by junior Jim Ratliff and if that name looks familiar, yes, same family. The next two teams are both quite battled-tested coming out of the best league in the section, the WCAL. The Sacred Heart Cathedral boys finished in 2nd place in 2019 and finished in fourth place at the WCAL final just in front of cross-town rival, St. Ignatius. Both teams will now be aiming for the top spot in this division. The individual favorite will be an easy one with one of the best runners in the section, Saratoga's Harrison Dance.
Girls Division III (Top 2 teams qualify for CA state XC meet)
From 2011 through 2017, the dominant team in this division was the Aptos girls. They rolled through seven straight section titles and were finally upended in 2018 as the St. Ignatius girls won their first section title since 2010. The SI girls enjoyed winning so much that they repeated in 2019. This year, the Aptos girls are back and ready to claim another section title. They ran well at the SCCAL final to finish behind a tough Scotts Valley team. Keeping Aptos honest will be the Sacred Heart Cathedral girls who finished a strong 3rd at the WCAL final. The individual favorite may be the defending champion, Noelle Diep of El Camino. She has been dealing with some injuries but may be returning back to form just in time. Boys Division IV (Top 3 teams qualify for CA state XC meet)
Scotts Valley will be favored to win the section title although they have been in this position before and not come away with the first-place hardware. Their last section title was in 2013 and this team will be very motivated to add one more plaque to their trophy case at school. They have run well all season and have an experienced team that has faced some of the top competition in California. Their strongest competition will come from WBAL champion, Menlo. The Knights will be led by the Pretre brothers, Landon and Justin, who finished first and second at the WBAL final respectively. They will need another strong race out of their entire lineup to take down Scotts Valley. Scotts Valley senior Jeremy Kain will be the individual favorite and will get stiff competition from teammate Ryder Brabo. the Pretre brothers, Moises Benito of Palma, and James Ponzio of Monte Vista Christian. Girls Division IV (Top 3 teams qualify to CA state XC meet)
Scotts Valley will be aiming for two titles on this day. Their girls will also be aiming for a section title here led by the best runner in the entire section, sophomore Ashlyn Boothby. She had a 2nd place finish at the Lowell Invitational (took a wrong turn) and ever since then, UNDEFEATED. No losses. Sister, Amber Boothby gives Scotts Valley quite a one/two punch. Just like the boys will have a WBAL team to contend with, the girls will be challenged by the 2nd best team in their league, Sacred Heart Prep. The Gators ran their best race of the season chasing Castilleja at the WBAL final and will be formidable in this division. Carmel appears to be the third-best team just ahead of the Menlo girls. Along with the Boothbys, the other top individuals will all be from Sacred Heart Prep and they are Julia Soderbery, Lucy Paynter, and Janie Morganroth.
CHECK OUT A PROFILE OF ASHLYN BOOTBY