The first Central Coast Section (CCS) meet was held in 1965 at Vasona Park. The next competitions are listed below until 1977 when the Crystal Springs course became the yearly host of the meet except for the rain-delayed section meet in 1984 which took place at the College of San Mateo. 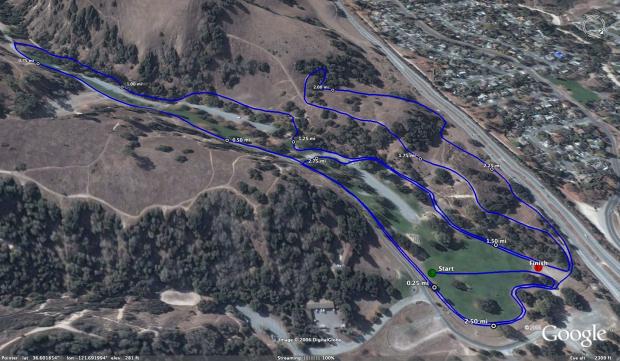 Girls Division III (Top 3 teams qualify for CA state XC meet)
I have written the following the past two years and sure enough, it still applies to this year's race. "If one team has nothing to worry about this coming Saturday, it's the Aptos girls. They will be OVERWHELMING FAVORITES to win another section title. Any other team in this division thinking about winning the team title should stop immediately and select a more reasonable goal." Aptos has been highly ranked throughout the season but didn't put together their best race of the season until their league final upset over Santa Cruz. With 2 more teams qualifying for state, several teams have their eyes on those spots. Among the contenders will be Sobrato, St. Ignatius, North Monterey County and Sacred Heart Cathedral. Last year, Marea Zlatunich won CCS with Live Oak junior Kaylah Grant in 2nd place. They will battle once again this year and both runners should once again secure the top two spots. The rest of the contenders include Grant's freshman teammate, Audrey Reed, Soquel sophomore Gabby Hughes and Sacred Heart Cathedral sophomore, Sabina House.
Boys Division III (Top 3 teams qualify to CA state XC meet)
The slight favorite in this division is a team that has done quite well in Division IV for many years, Greenfield. They easily won Division IV last year and return 4 of their top 5 runners from that team. They will have a tough opponent in Aptos, a team that is quite familiar with this division. Aptos steamrolled the rest of the competition at the SCCAL final and their coach, Dan Gruber, has accumulated a few (ok more than a few!) CCS titles during his storied run at his school. The next two teams in line are Westmont and their talented front-runners (Garrett Macquiddy and Jason Gomez), Sacred Heart Cathedral and the defending champions, St. Ignatius. The Wildcats outdistanced league rival SHC at last year's section meet but had to replace a team full of seniors from the 2016 team. The favorite to win this division is the already mentioned, Westmont sophomore, Garrett Macquiddy. He is one of the rising stars in our section and could post his first section title here. Keeping him honest will be Amit Nag of Saratoga, SCCAL runner-up, Jorge Benitez of Aptos and Trevor Paulbitski of Riordan. Greenfield will be led by their front-runner, Rigo Garcia.
Girls Division IV (Top 3 teams qualify to CA state XC meet)
The best girls' team in the Central Coast Section for most of the season has been Santa Cruz. They are a senior-dominated team led by ultra-talented Mari Friedman. Running without one of their top 5 runners at the SCCAL final, the SC girls lost their quest for a league championship by one point to league rival Aptos. They should be fully loaded at Toro Park and will be one of the heavier team favorites. The narrow league loss should also motivate them and the team race here should be for second place. Menlo qualified for the state meet last year as the 3rd place team and will be looking for a trophy winning performance on Saturday. The next best teams should include San Lorenzo Valley, Sacred Heart Prep and Carmel. Friedman will be the favorite for the individual title. She will be challenged by The Kings Academy sophomore, Anna Mokkapati. Also in the mix will be Menlo sophomore Kyra Pretre, Santa Cruz sophomore Lila Roake and Sacred Heart freshman, Luci Lambert.

Boys Division IV (Top 3 teams qualify for CA state XC meet)
The strong favorite to win this division will be Pacific Grove. They have a strong duo (Will Stefanou and Henry Loh) up front and their back end of their lineup should seal up the team victory. The chase for the next two team spots should be more interesting between Half Moon Bay, The King's Academy, and Palma. They are all within striking distance of a top 3 finish and the edge may go to Palma with their familiarity with the Toro Park course. WBAL rivals Sacred Heart Prep and Menlo will both be aiming for a top 5 finish and both could be dangerous with an improved run from their 4th and 5th runners. The overwhelming individual favorite is Menlo senior Robert Miranda. He missed the 2016 season due to an injury and will be fired up to claim his first section title. Palma junior Sam Lavorato will try to keep Miranda in his sites while holding off the Pacific Grove duo, Menlo freshman Kamran Murray and San Lorenzo Valley junior Chris Anderson.

Girls Division V (Top 2 teams qualify for CA state XC meet)
The Division V girls have had a rough time breaking into the top 10 at the state meet which resulted in losing an automatic qualifying position a few years ago. With only the top 2 teams advancing to the state meet, the margin of error for the contending teams is quite small. Last year, the Nueva girls won their first section title in their first year eligible for section competition. They went on to record an even more impressive third at the California state cross country meet. This year, Castilleja appears to be the favorite despite missing senior leader Cosi Layton. She returned from an injury at the WBAL final but appears to be a few weeks away from returning to her old form. Nueva will be in contention for the 2nd spot and will hope for an off day for Castilleja to record their 2nd straight section title. Notre Dame Salinas and Crystal Springs Uplands will be battling for a 3rd place finish after one point separated them last year at the CCS final. Castilleja sophomore Tevah Gevelber has been most impressive in this division and will try to fend off Nueva junior, Jenna Lange. Angela Leavitt, Notre Dame Salinas, Ella Rehman Crystal Springs Uplands and Lauren Traum Castilleja will all contend for top 5 individual finishes.

Boys Division V (Top 3 teams qualify for CA state XC meet)
This division continues to improve with quality top individuals as well as the amount of competitive teams. This year should be another exciting race for the smallest schools in this section. The top three teams appear to be separated from the rest of the competing teams with WBAL teams Crystal Springs Uplands and Eastside College Prep and PSAL champ, Nueva. Should any of those teams falter on Saturday, Woodside Priory appears to be the next best team. Crystal Springs Uplands senior Nicholas Medearis finished in 3rd place last year and after a strong Track and Field season comes into the meet as the individual favorite. St. Francis CCC junior EJ Kelly, CSUS teammates Aiden Duncanson and Jake Symonds will all race for important team points behind Medearis.

Girls Division I (Top 2 teams qualify for CA state XC meet)
The best team on the boys side, St. Francis (Mt. View), resides in Division II. The best team on the girls' side may be more of a debate but at this point, we will go with the Homestead Mustangs. They are currently ranked #3 in CCS and will be looking to make a statement here. They have raced all over the state of California and faced a lot of the top-ranked teams in the state. They are led by senior Elena Kamas who seems to be in her 10th year at Homestead (just kidding!). With two teams advancing to the state meet, it appears the following teams will battle it out for the final spot after the very solid Homestead team and they are Palo Alto, Monta Vista, a surging Menlo Atherton team and Carlmont. Individually, Kamas will be favored and could lead a top 3 finish for the Mustangs with teammates Rebecca Hasser and Kaitlyn Williams.
Boys Division I (Top 2 teams qualify for CA state XC meet)
Bellarmine will be the strong favorite to claim their 4th straight Division I title. They have been less than full strength for the majority of the season but will not have to deal with league mate St. Francis for the rest of the season. The section lost one automatic qualifying spot from this division which makes things way more competitive for the teams in contention for 2nd place. At this point, it appears that the Palo Alto boys are the slight favorites but are definitely not a lock with Los Altos, Homestead and Carlmont all within striking distance. Bellarmine senior Meika Beaudoin-Rousseau is as much of a lock as you can get for the individual title and has a shot at setting a new course record. There is a strong group of runners behind him that includes teammate Alex Scales, Palo Alto duo Henry Saul and Sam Craig, Los Altos junior Owen MacKenzie and Carlmont senior Ryan Wilson.
Girls Division II (Top 3 teams qualify for CA state XC meet)
The final girls' race of the day will be the Division II competition. The Presentation girls finished in 7th place last year but will be aiming for a section title this year. Their last race resulted in a WCAL team title with a spectacular winning score of 21 in the always uber-competitive league. The chase for the next two qualifying team spots should be quite exciting with 5 teams all ready to confirm Fresno plans post-Thanksgiving. That group includes Willow Glen, Lynbrook, Gunn, Mountain View and the defending champs, St. Francis. The best individual runner in this division is Gunn senior, Joyce Shea. She will be kept honest by Aragon junior Emma Madgic, Mountain View senior Serena Myjer, Presentation senior Paige Comiso and Willow Glen teammates, Madison Yen and Emma Clark.
Boys Division II (Top 3 teams qualify for CA state XC meet)
The overwhelming favorite to win the team title here will be St. Francis, a tough battle-tested team out of the WCAL. This season, the Lancers have made their case as the best Central Coast Section team ever. The established a new CCS record on the Woodward Park course at the Clovis Invitational. Earlier in the season, they established a new team time record on the Toro Park course. At the WCAL final, they ran the 3rd fastest team time ever on the Crystal Springs course (trailing only Jesuit '85 and Mission San Jose '78). They will be led by individual favorite, Shyam Kumar who just recently committed to Cal Poly SLO. The 2nd best team in this division is Willow Glen and they seem to be locked into a 2nd place finish. The last spot will be up for grabs between WCAL rivals Mitty and Serra. The individuals up front and behind Kumar will include his St. Francis teammates led by Colton Colonna. Andrew Hill senior Jorge Estrella should be the first individual not on a qualifying team.
Tweets by MileSplitCA