Over the years, there have been different means to determine the best cross country teams in the nation. The first was the postal meets which took place in the 60s through the late 80s that allowed teams to time trial their five best runners over different distances (mostly 2 miles). The results were tabulated by Track and Field News which then ranked the top teams in the nation at the end of each season.

For many years, author Marc Bloom listed his Harrier Super 25 rankings with the last rankings for each season naming the national champion. In 2004, Nike established the Nike Team Nationals (NTN) which eventually evolved into Nike Cross Nationals (NXN). Since that first year, the best teams in the nation raced each other to determine a true national team champion. 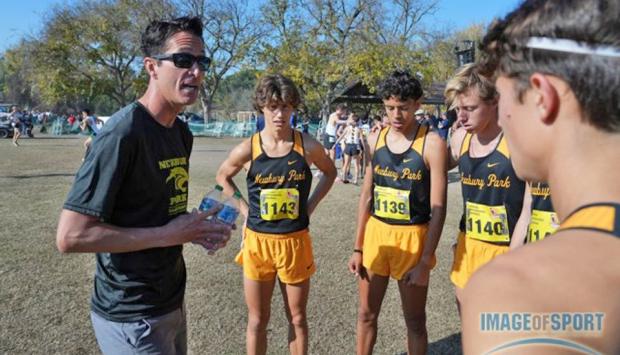 When the conversation turns to the best boys' cross country teams of all time, the 1993 Mead, 1972 Lompoc, 1999 York, and 2018 Loudoun teams are usually among the teams that are mentioned.

That is until this past season.

Oh, by the way, adding to their many accomplishments, including the MileSplit50 No. 1 final national ranking, they are also the MileSplitCA Boys Cross Country State Team of the Year, but that had been obvious for a while.

The team is held in such high esteem that they have been mentioned along with some of the all-time best teams in other sports like the 2015-2016 Chino Hills HS basketball team (3 future NBA 1st round draft choices) and the 2017 Mater Dei (SS) football team (16-0 with nearly 30 future Division I players).

That is indeed rare company for a cross country team.

In 2019, the Newbury Park team led by NXN individual champion Nico Young won their first national title. COVID ended their hopes of repeating as national champions in 2020 but that definitely did not stop the coach Sean Brosnan-led juggernaut. 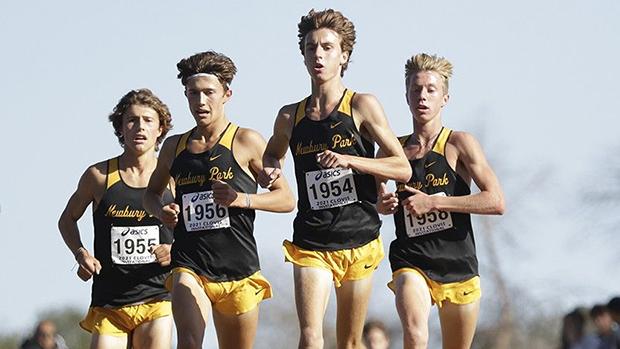 Fast forward to the 2021 fall cross country season, Newbury Park came out of the gate smoking with a huge win at the always lightning-fast, Woodbridge Invitational. The team was led by junior Leo Young who won the race with a time of 13:38.1 for the 3-mile course. (A course record for the SilverLakes layout in Norco.)

He was followed by teammate Aaron Sahlman, also a junior, in second at 13:42.3, Lex Young, Leo's twin, in third at 13:44.4, and senior Colin Sahlman in fourth in 13:48.0. That one team could have one runner that fast is amazing. A team having four runners that fast? Ridiculous.

Their fifth man that day, Hector Martinez, finished in 25th place with a time of 14:38.1. Final team score? 25! The 2nd place Great Oak squad scored 190. An amazing performance that was just the start of their historic season. Their team time, by the way, 69.30!

Their next big event was the Clovis Invitational. There, Newbury Park opened more eyes as they steamrolled the 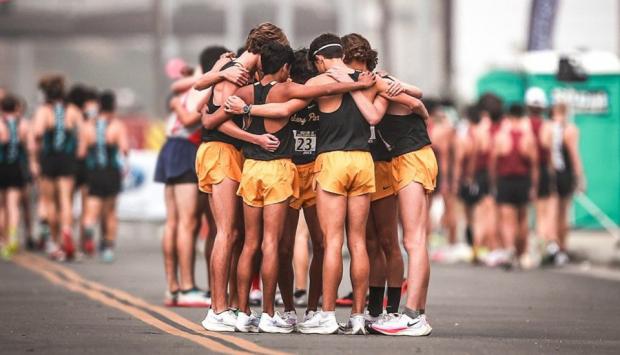 At the Southern Section Finals on the new Mt. SAC layout, they scored an unprecedented 15 points with a stunning 1-6 finish in the Division I -- large schools -- championship. It should also be noted that the team has developed quite a following and at the State Meet, as was the case at the CIF-SS Finals, there was a long line of people waiting for autographs and photo opportunities with the team and their coach following their race. Some coaches compared it to Beatlemania.

The last race of the season took place in Alabama as NXN once again canceled their national meet. The Garmin RunningLane meet hosted the fastest teams in the nation and Newbury Park came in looking to make their final big statement of the season.

The Panthers' top three runners went under the previous 5000m record time of 14:10.4, previously set by Michigan's Dathan Ritzenhein. Newbury Park's average team time was 14:14, another record!  Against a national class field, Newbury Park scored 29 points and left no doubt that they are indeed the greatest cross country team we have seen in high school history.

And our California Boys Cross Country Team of the Year!

Albert Caruana is a coach at Crystal Springs Uplands School and a regular contributor to MileSplitCA.