If ever a program's philosophy was going to be tested, it came when Buchanan High's No. 2 runner, Grace Hutchison, went down with just 600 yards to go in the CIF-State Division I Cross Country Championships.

Eventually, she got up to finish 180th out of 180 runners. But she finished.

"We prepared for the unexpected," said coach Brian Weaver. "Everyone but Sydney (Sundgren) saw Grace was down. They wanted to stop and help, but they had been told that if something happened like that, to just keep going and do the best they could.

"I'm sure Sydney was surprised when she didn't see Grace." "I turned around at the finish line expecting to see Grace but she wasn't there," said Sundgren. "I was kind of shocked. I thought, 'Oh no, what happened?' and I thought we might not win the team championship. I didn't try to count but I saw our other runners did really well."

The Bears' No. 1 runner, who finished third overall, watched as the next four Buchanan runners placed in the top 20 (after individuals were omitted), giving the school just 51 points and a clear victory over Newbury Park, which was second with 72.

All that without their No. 2 runner who recovered to help the Bears finish second to NIWOT of Colorado in the Garmin RunningLane Nationals in Huntsville, Alabama., a week later.

That made selecting Buchanan the MileSplitCA Girls Cross Country State Team of the Year a fairly easy choice.

It was the State Meet victory over Newbury Park, which had handed the Bears their lone loss of the season at Woodbridge, that tilted the scales clearly in their favor. 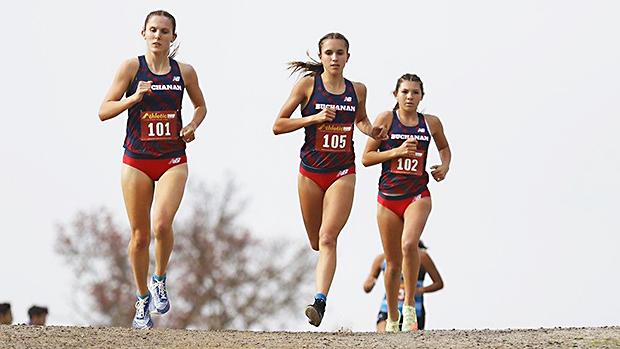 Cornett fell a few yards short of the finish line but the only one to pass her was Mendyk.

Look again at the years in school-all five scorers plus Hutchison return in 2022 as only senior Kaylee Elliott graduates.

They'll have to be at the top of their game again to repeat.

"Winning State just solidified all the hard work and effort they put in," said Weaver. "We had great support from the school, the parents, and the community.

"The girls deserve this because they bought in that everyone on the team was equally important. You can't have someone like Grace go down without knowing that changes everything and now No. 3 is No. 2 and so forth.

"This team was very close. They worked hard together realizing all they had to do was run their race, to do what you can do. The first mile isn't what matters in cross country. To get beaten early on and come back like they did was the first clue how good they'd be."

Indeed, the Bears runners and their coach learned a lot at Woodbridge. "I don't count that as a loss," said Weaver, "we just didn't win. It was a learning experience to see how they'd compete. It was the same at Clovis and at the Flat SAC in Sacramento. We just wanted to see different people and it prepared us for the unexpected."

Weaver said this year was unusual in a lot of ways and he credited the team for not letting what could have been major distractions get in the way.

"The kids had a lot of stress this year," said the coach who has been at Buchanan since 1991. "School itself was stressful for all Californians. Kids had to wear masks in class.  As coaches, we never had to deal with that before.

"You couldn't count last year (2020) as a real cross country season, so when we started it was getting back to normal. We had two freshmen and a transfer (Cornett) who really hadn't experienced a full season, so while I thought we'd be pretty good, you never know."

And as for that target on their back, he welcomes it.

"I think it's great (that almost the entire team returns)," said Weaver. "People know what we've done and we have a couple more kids coming from the feeder junior high who are going to help. It's great."