This Saturday, Dublin HS will once again be the epicenter of Northern California distance running as it hosts the Dublin Social Distance Fiesta #3. The first two versions were a mere warmup as we should be in for multiple spectacular races, especially in the soon-to-be world-famous, Sombrero heats. We will also get a return of the Distance Medley Relays which are always a fantastic way to end any meet.

The secnd version of this meet featured two superb doubles in the 1600m and 3200m. Albany junior Sophia Nordenholz was a double victor as she PR'ed in both races with a 4:55.86 best in the shorter race and 10:29.83 in the eight-lap affair. She barely just missed both meet records but more than made up for that at the Arcadia Invitational as she roared to a 10:05.91 2nd place finish and NEW North Coast Section record. The previous NCS record was held by Nora Williams of Livermore who set the previous record mark of 10:06.3 in 1978.

This weekend's meet will start a little earlier than Meet #2 at 10:50 am and with the addition of the DMRS, the last competitor should cross the line just before 9 pm.

HOW TO WATCH DSDF Meet #3 LIVE on MILESPLIT

This race should prove to be quite competitive. The favorite should be the Albany junior Sophia Nordenholz. She will attempt to win the trifecta here as she won the 1600 in the first two DDF meets. Her time has progressively improved and this should be the meet where the meet record should get broken.

Her main competition should come from Canyon, Anaheim junior Emma Hadley. She has the fastest personal best in the field at 4:51.01 from 2019 and has a season-best of 4:58.98. Check that. I was just informed that she is a scratch.

Two other runners of note are Marin Catholic senior Samantha Wallenstrom and Sacred Heart Prep senior Luci Lambert. Wallenstrom is the 2019 California state champion in the 800m as well the winner of the DDF 1600m in 2019. She has also run a personal best time of 4:56.20 in a previous league meet.

The second fastest entrant is McClatchy senior Julia Heckey, who established her PR of 4:55.24 two years ago. 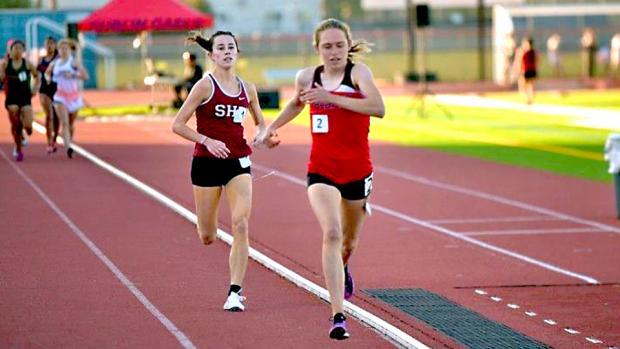 The oldest meet record was broken in the last DDF meet. The previous record of 4:17.28 was set by Novato senior Erik Olson way back in 2009. With Arcadia qualifiers at hand, many of the top distance runners had focused on running the 3200m instead of trying to run a fast 1600m. The new record set by Jesuit's Ajani Salcido may not last very long as he has already lowered his personal record to 4:17.81 in a previous league meet.

He will also be racing one of the top middle-distance runners in the country in Amador Valley senior, John Lester. Aside from his spectacular 1:48.26 as a junior, Lester also ran a 4:06.97 mile in his last competition of the 2020 season.

The girls' 800 seems to be a wide open affair. With Emma Hadley no longer in this event, the favorite may be Cate Peters of Monte Vista. She has run a PR of 56.85 in the 400m and seems primed for a fast 800m here.

Granada freshman Evelyn Ruckmann-Barnes finished in 2nd place at the Dublin Distance Fiesta #2 with a new PR of 2:16.32.

Lick-Wilmerding senior Maya Lacamp is another runner capable of racing near the front end of this field and had a season best of 2:17.36 at the Arcadia Invational. This race will be without the winner of the DDF #2 800m, John Lester who will be focused on running a fast 1600m. However, we should have a very competitive race. Monte Vista Christian senior Andrew Bachman has the fastest entry time at 1:54.99 from the Arcadia Invitational.

Jack Vanden Heuvel of Healdsburg has a best of 1:55.14 and is coming off a victorious effort at the Granada Distance and Sprint Festival.

El Camino junior Yutaka Roberts also PR'ed at the Arcadia Invitational with his 1:55.25. He is also a fearsome closer and will be hard-charging in the last 200m aiming at the win here.

The big favorite to win here will be Albany junior Sophia Nordenholz who as I mentioned about ran a NCS record setting time of 10:05.91. The only question here will be by how many seconds will she break the meet record here that was established in 2018.

Battling for second place will be St. Helena senior Harper McClain. She ran her personal best time of 10:28.83 at the Arcadia Invitational and will be looking to lower that time before she starts to looking ahead to competed at the University of Oregon.

Bishop Union's senior, Sierra Burror will be traveling from the Central Section and also looking to improve her Arcadia personal best of 10:45.97. She will more than likely tow San Ramon Valley's junior, Sofia Tavella under the 11 minute mark along with Campolindo sophomore, Ellie Buckley.

BOYS 3200m (Meet Record: Matt Strangio, Jesuit, 8:47.97 set in 2019)
Before we proceed ahead to previewing this event, I would like to acknowledge the fact that 15 California runners dipped under the 9 minute mark at the Arcadia Invitational. 7 of those runners were from Northern California including three juniors, Braden King, Jesuit, Sean Lacey, Bella Vista and Alex Mader, Lick-Wilmerding.
This meet will feature three runners who have all dipped under the 9-minute mark including the already mentioned Lacey and the Topper twins, Nolan and Galen. Davis senior Diego Perez will be hoping to join them as he has displayed the speed to accomplish that feat with 1:55.12 and 4:14.01 bests this season.
A few other runners that could be in the mix among the leaders are Taylor Iden of Archbishop Mitty, Jeremy Kain of Scotts Valley and Patrick Currulla of De La Salle.
HOW TO WATCH Dublin Social Distance Fiesta Meet #3
- - -
Albert Caruana is a multi-sport coach and regular contributor to MileSplitCA who serves as the Bay Area regional editor.
- - -
Inserted photos by Daniel Tyree.
Tweets by MileSplitCA