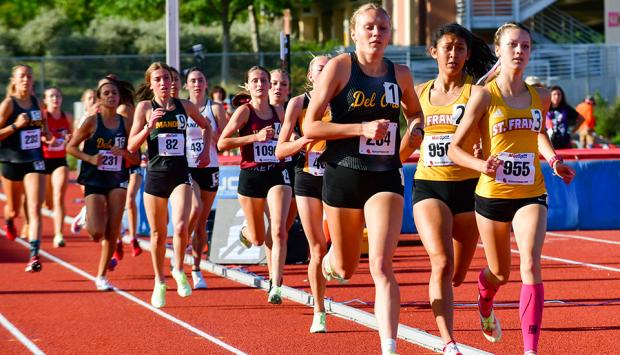 SACRAMENTO -- How appropriate is it that one of the greatest high school girls distance runners in the rich history of the Sac-Joaquin Section would be the star of stars at the Sacramento Meet of Champions?

Del Oro senior Riley Chamberlain again reminded us of her distance brilliance with two stellar performances that earned her the Girls Track Performer of the Meet honors on Saturday night at American River College.

The brand-new track produced plenty of fast times and an abundance of season bests over its two sessions and nine-plus hours of a high school track and field event that showcased some of the best from not only the SJS, but also the North Coast Section, the Northern Section, the Oakland Section, and the Central Section.

But the BYU-bound Chamberlain's performance and resulting accolades were almost predictable. She was a headliner coming in, and like many of the other marquee athletes who performed primarily during the Invitational evening session, she brought her A-game.

First, in a stellar field of strong runners, Chamberlain went to the front early, pulled longtime rivals Cate Joaquin and Tatiana Cornejo -- both of St. Francis -- to the front with her. The Cal Poly-bound Cornejo fell off toward the latter half of the race, but the Georgetown-bound Joaquin hung tough and pushed her friend all the way to the tape. The duo both split 69 on the third lap. Chamberlain responded with a 70.5 final lap to outlast Joaquin's 73.3.

Chamberlain crossed in 4:45.42 with Joaquin gliding in just behind in 4:48.58. The fastest 1600m Chamberlain has run in nearly two years improves her CA No. 3-ranked time. For Joaquin, it was nearly a five-second drop from the PR she ran last month at Dublin and lifts her into fourth in the state rankings. Cornejo went 4:57.52 for third place.

Among other highlights from the elite Invitational Session - Oak Ridge senior Alison Sahaida became the eighth pole vaulter in the state this season to clear 13 feet and she did it on her third attempt after clearing 12-6 to beat Pleasant Grove junior Abigail Wagner (12-2). Sahaida, who took three attempts at 13-5, had a previous best of 12-10.

- The boys 4x100 mete relay team from McClymonds (OK) of Javian Thomas, Michael Dansby, Jay'Vion Cole, and Roland Hammork pulled away from Acalanes and El Cerrito to run 40.98, establishing a meet record. It's the third-fastest time in the state and improves upon the quartet's previous best of 41.60 to win at Stanford. Acalanes was second in 41.39 with El Cerrito third in 41.59, the Nos. 5 and 8 times in the state.

- Reno (Nevada) senior Kyle Gammill-Ortega ran off to hide in the boys 1600m but the pack caught him late and he barely held them off, crossing in 4:12.52. Jesuit (SJ) junior Brandon Moreno was second in 4:12.94, Chico (NS) senior Mario Giannini was third in 4;13.15, and Vacaville (SJ) sophomore Colton Walker, Folsom (SJ) junior Nathan Short, and Davis (SJ) senior Zachary Ayers also went under 4:14.

- The boys 3200m turned out to be one of the most competitive races of the entire meet, as Sonora (SJ) senior Adin Dibble and St. Mary's College (NC) junior Mateo Malko-Allen put on a show.

The senior followed a sixth-lap 72 with a penultimate-lap 70 as Malko-Allen went 72-69. The final lap was all pure guts as Dibble surged, and Malko-Allen matched it. The junior pushed but the senior wouldn't relent. In the home stretch, Dibble proved to have a drop more in the tank as he dropped a 57.6 to his challenger's 58.9.