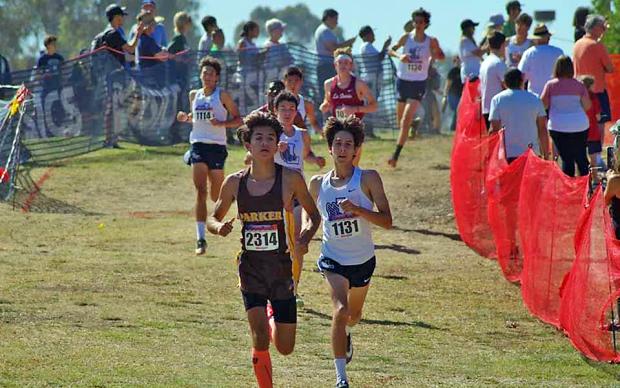 Richard Moreno ran up front for Loyola at Mt. Carmel, challenging Francis Parker's Kenan Pala, with a trio of Cubs' teammates not surprisingly in the picture among the leaders. (Phil Grooms photo)

Understand, Loyola High cross country coach Dr. Lalo Diaz has a plan. Like pins on a graph, he has markers that plot the season.

The first was the 41st Mt. Carmel Invitational almost a month ago, where it seemed the Cubs dominated every race.

That's because they did.

In the Division I Invitational/Senior race, Loyola went 2-5-6-7-11-17 (26 after adjusting to individual runners) for the low score in the meet run over Balboa Park's challenging 2.95-mile course.

The Loyola sophomores scored 49 points to win their division and the freshmen tallied 34, with Aaron Pavon capturing the race in 17:37.1, winning by 34 seconds.

Proving they were human, after all, the junior quintet placed fourth with 119 points behind San Diego Otay Ranch's 91. When the divisions were combined, the all-boys school scored just 52 points, well ahead of Salpointe Catholic of Tucson (115) and host Mt. Carmel (120).

(Mt. Carmel mirrored the Cubs' results at the Rosemead Invitational earlier in September where they won four of five races - Elite, senior, sophomore, and freshman. Moreno, Bissell, and Ratkovich went 2-3-4 in the elite race there, Henry Payne was second in the junior race, Bennett and Corboy went 3-4 in the sophomore race, and Pavon was a 17-second winner in the freshman race on the 3-mile campus course.)

Why would Loyola go all the way to San Diego to run in the heat of the day (which wasn't that hot at 78 degrees) when they could test themselves against most of the Southern Section's top teams in the highly popular Woodbridge Invitational?

Woodbridge has three big selling points -- it is run at night, it is a ridiculously fast 3-mile course and, of course, there is competition like Newbury Park that went 1-2-3-4 in the Sweepstakes race. "I'm old-school," said coach Dr. Diaz. "I want my team to be running their fastest times at the end of the year at Woodward Park (site of the state meet), not in September.

"What good would it do to run a sizzling fast three-mile time now and maybe never get faster? I've seen that at the Arcadia Invitational in track where you have a large group breaking nine minutes for 3200 and then by the State Meet no one is breaking nine."

Diaz has been the No. 1 man at Loyola -- an all-boys school in Los Angeles -- for 35 years and a head coach for 45 years overall. In his time with the Cubs, Loyola has won six State Meet titles, placed second twice, and has three CIF-Southern Section titles and three more runner-up plaques.

He isn't the only one who believes in end-of-the-year performances and his athletes completely buy-in.

"We come to Mt. Carmel because it's run on a very challenging course," Diaz said. "It's where the Foot Locker Nationals are and a good test with two challenging hills."

"Too fast, too soon isn't what we're looking for. We'll next focus on Mt. SAC (Pin No. 2 on Oct. 23) for a basis of comparison and then set our sights on the end-of-the-season meets to peak (Pin No. 3, obviously looking for an upward trend)."

"We'll hope to do like we did when Charlie Sherman was a junior in 2015 and we won Division II (89-98 over Anaheim Canyon without a runner in the Top 10). All the other years we had legit studs.  This year we have two kids who switch off being No. 1 (Moreno and Dylan Bissell).

The first MileSplitCA rankings had Loyola at No. 2.

However, Newbury Park and Great Oak dominated Woodbridge where, sure enough, most of the runners posted sizzling 3-mile times. Those were also the top two boys teams on the 5K course at the Clovis Invitational. Moreno says just being on the Loyola team is special and going to Mt. Carmel is fun.

"We always start easier and build," said Moreno, a senior whom Diaz credits with helping keep the team together during a pandemic that hurt other programs.

"We go to Mt. Carmel, Mt. SAC, and then CIF. We just have fun right now, it's a culture that our coach has built. We have 75 runners out and we take the hard days hard and the easy days easy. The guys are determined mentally to get better physically as the season goes on."

As for Diaz, he has noticed big changes in high school cross country from when he first started.

"In the last 20 years cross country has just exploded," he said. "Back in the 1970s there were pockets of good teams. Fontana used to be real strong in football, for example, but now there are several schools in that area. Chino Hills Ayala and Newhall Hart were strong in cross country-there was no Newbury Park or Great Oak.

"A sub-9-minute two-mile used to be special when guys like Jeff Nelson of Burbank ran but there were 16 California runners under 9 at Arcadia last season. Kids are careful about their diets-heck, we'd go to Tommy's Hamburgers before a meet.

"There was no Google; now everyone knows what everyone else is doing. I go to the state meet and don't even bring a stopwatch or a clipboard because everything is on a big screen. My wife used to help me and now she doesn't even need to go." Being a rare all-boys Catholic school of 1,275 is an advantage as far as Diaz is concerned.

"During the COVID I didn't have to worry about the boys because Moreno and others made sure everyone on the team was doing the workouts they were given on Strava," he said. "They all had to report to the captains and if they missed a workout, they had to have a good reason.

"Loyola has a blue-collar work ethic. Moms and dads are very committed and being doctors and attorneys, they know how much hard work it takes to be successful.

"My first student teaching assignment (U.S. History) at Bell Gardens, the students wouldn't raise their hands to answer questions because they were afraid to be embarrassed if they were wrong -- especially the boys when there were girls in the class. That's not a problem at Loyola because we don't have girls, it's not like a fashion show.

"There are no 'dumb questions' at Loyola."

Only good results over the years on cross country courses.

Steve Brand is a freelance writer and regular contributor to MileSplitCA