After a one-year hiatus, the Central Coast Section Finals Track & Field meet will make its triumphant return this coming Saturday at Soquel HS. The meet has been previously held at San Jose City College and Gilroy HS but due to county restrictions, Soquel HS has stepped forward to host the section final.

Saturday's schedule begins with several field events starting at 10 am and the running events starting at 1 pm. Athletes and spectators should plan to arrive early as there may be traffic heading to Santa Cruz with warm weather on tap for this weekend. Following this past Saturday's semifinals, I will now take my best shot at selecting the potential winners in each event as well as their biggest challengers. I will start with each field event and follow that up with the running events in the order that they will be held.

Boys Discus
This is the only event that will feature the defending section champion. Silver Creek senior Charlie Dang won the section discus title as a sophomore in 2019. He will be an overwhelming favorite to win his second title with a personal best of 187-6 which is over 30 feet better than the second-best mark of 155-5 by Willow Glen senior Travis Martin.

Girls Shot Put
The winner in this event will be either San Benito senior Julia Hicks or Branham senior Kendall Fowler. They were the only throwers over 37 feet at the semifinals, with Fowler owning a 40-0 season best while Hicks's had a best of 38-5.

Girls Pole Vault
This is another event that will be decided by two competitors. Carmel senior Sarah Graessley has a best of 12-4 which was set at the West Coast Relays on May 1. That mark was matched by The King's Academy senior Joanna Yu at the May 12th WBAL meet. Both vaulters cleared 9-6 at the semis and will battle it out this Saturday for the section title.

Boys Long Jump
This is one event that is wide open and multiple jumpers will have an opportunity to claim their first section title. The season-best mark belongs to Los Altos junior Joshua Kung at 22-8.75. Two other jumpers have also passed the 22 foot mark with Andrew Fu of Harker at 22-8.5 and Edgar Silva of St. Ignatius at 22-6. The leading mark at the semis belonged to Willow Glen's Jackson Anderson at 21-2.5. Charlie Kinne of Valley Christian jumped at 21-0.5 at the semis to finish second followed by Zachary Sims of San Benito at 21-0. The winner should come from that group of jumpers making this one of the most competitive events.

Girls Long Jump
This is another event with a previous section champion. St. Ignatius senior Megan Ronan won the long jump as a freshman in 2018. She has been consistently over 17 feet this season with five efforts over 18 feet and a best of 18-5.50. She had the second best jump in the semis, which leaves the door open for the Jennifer Luong of Piedmont Hills, who had a wind-aided 18-8 at her league final.

Boys High Jump
The favorite to win this event will be Palo Alto senior Aaron Kim who has a season-best of 6-8 and was one of the top qualifiers to the Finals with a 6-0 jump at the semis. He will be pushed by Willow Glen junior Adam Berg.

Boys Shot Put
Silver Creek senior Charlie Dang will win the discus and look to double his pleasure by winning the shot put. He will have a more competitive event here with Valley Christian junior Jacob Kiesman who has the better season mark but trialed Dang at the semifinals.

Girls Discus
The best thrower in this event is San Benito senior Julia Hicks. She has the longest throw of the season at 140-3 and had the longest throw at the semifinals at 123-3. Her main competition will come from Homestead senior Ningning O'Brien. The favorite to win this event is defending section champion, Pinewood senior Maia Garcia. She has the best mark in the state at 5-8. She has also already won a section title this spring as her basketball team defeated Mitty to claim the Open Division title. Her main competition should come from Carmel senior Lauren Pritchard who has a season-best of 5-6.

Boys Pole Vault
The winner in this event will be between two athletes from WCAL. The best vaulter this season is Bellarmine senior Leo Garcia-Czarkowski who has a best of 15-0 at the WCAL Finals. Finishing 2nd behind him was St. Ignatius junior Logan Lehnert at 14-6.

Girls Triple Jump
The favorite to win this event will be Los Altos sophomore Megan MacKenzie. She was the leading jumper at the semifinals with a mark of 37-6 and also holds the section lead throughout the season at 38-0.

Will Denning of Serra will be a slight favorite in this event. He was the WCAL champion as well as recorded the best mark this season at the Arcadia Invitational (45-4). Charlie Kinne of Valley Christian recorded the best qualifying mark here at 43-4.

Boys 400 Relay
With the fastest team this season, Valley Christian, getting DQ'ed last Saturday, the favorite will now by the Lynbrook boys who won their heat in 43.28. The all-sophomore Harker lineup scored a season-best of 43.99 to also dip under the 44-second mark.

Girls 1600
The heavy favorite to win this event is Sacred Heart Prep senior, Luci Lambert. She will be kept honest by Harker senior Anna Weirich who qualified for all three distance races. The Boothby sisters (Amber and Ashlyn) will also be in the mix as they battle for a podium finish.

Boys 1600
This will be a very competitive race. Bellarmine senior Nolan Topper will make sure it's a fast race and will lead as much of the race as he can. He will need to stay ahead of the closers that include Menlo senior Calvin Katz, Scotts Valley junior Jeremy Kain, and Archbishop Mitty senior Taylor Iden.

Girls 100 Hurdles
The class of the field here is Silver Creek junior Chika Nwachukwa. She has run 15.20 this season and was easily the fastest qualifier with a time of 15.41.

Boys 110 Hurdles
The boy's race will be more competitive than the girl's short hurdle race with multiple hurdlers in the mix for a section title. The slight favorite will be Valley Christian's Charlie Kinne who recorded his best time of 15.25 at the WCAL Finals. He also posted the fastest time qualifying for this race and will be challenged by Leo Garcia-Czarkowski of Bellarmine and Los Altos senior Jimmy Dessouki. The favorite to win this race is St. Francis senior Isabelle Cairns. She led the qualifiers and has posted the best time this season at 57.70. Her main challengers will be Aoife Hernon of Mountain View who ran her fastest time of 58.23 at the semis. Burlingame freshman Cora Haggerty will be able to see both runners throughout the race and may surprise one or both runners in the final.

Boys 400
The favorite to win this race will be Serra senior Aidan Mendoza. He has the fastest time at 49.30 and had the top mark from last Saturday. He will have a tough opponent in El Camino junior Yutaka Roberts. He dipped under the 50 second mark for the first time this past Saturday and has the strength of a 1:53 800 runner. Ian Koe of Aragon is the other runner in the field who has also run 49 seconds and will be right there battling for a top 3 finish.

Girls 100
The favorite to win this race will be St. Francis senior Kaley Peterson. She rolled to a 12.10 season best time to win the WCAL Finals. Her main challenger will be Santa Catalina sophomore Juliette Kosmont. She has a best of 12.17 this season and will attempt to pull off the upset in this race.

Boys 100
Evan Johnson of Stevenson recorded the only sub 11-second mark last Saturday at 10.91. His main challenger will be The King's Academy senior Noah Short who has a best of 10.64 this season. Short will be focused on this race as he had to juggle track and basketball last Saturday. 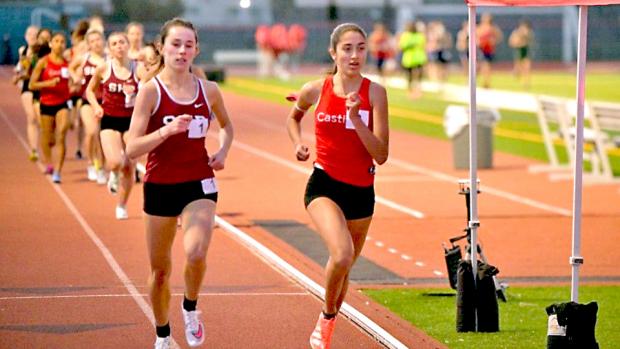 This race will be a battle between girls doubling back from previous events vs the runners running this event fresh. The race will be led by Isabelle Cairns of St. Francis who will also be competing in the 400. She will be followed by Luci Lambert of SHP who will have a little more rest from the 1600. Two sophomores will also be in contention focusing on this race. Palo Alto's Hillary Studdert ran her PR of 2:13.55 last Saturday. Castilleja's Samira Kennedy ran her PR of 2:14.72 chasing Lambert at the WBAL Finals.

Boys 800
The heavy favorite to win this event is El Camino junior Yutaka Roberts. He ran his PR of 1:53.32 last Saturday and will take the field out in the final daring anybody to follow him. The second-fastest time in the field belongs to Monte Vista Christian senior Andrew Bachman at 1:54.99. Also in the mix will be Scotts Valley's Austin George who ran a PR of 1:55.75 at the Arcadia Invitational. Archbishop Mitty Taylor Iden won the WCAL meet and has run 1:56.30 this season.

Girls 300 Hurdles
Lynbrook junior Alison Tjoe rolled to the fastest time last Saturday and has recorded a section best of 45.60. Her closest challenger will be Gunn hurdler Sharona Schwab who easily won her heat on Saturday and has a season-best of 46.17.

Boys 300 Hurdles
This should be one of the most competitive races of the day and we could have four hurdlers approaching the last hurdle all in contention for a section title. Those four hurdlers will be Jimmy Dessouki of Los Altos (39.07), Kathir Balakrishna of Fremont (39.57), Jeremy Huang of Palo Alto (39.79), and Liam Woodruff of St. Ignatius (39.72)

Girls 200
St. Francis will be the favorite to win the girls' team title and they will be paced by sprinter Kaley Peterson. She will attempt to win the two shortest sprint events and will be a heavy favorite to win here. She rolled last Saturday with her fastest time of the season at 24.94.

Evan Johnson will attempt to capture both sprint titles. A couple of sprinters have run faster times this season but Johnson has been the most consistent. His PR of 22.14 was also set running into a headwind. Aragon's Ian Koe was the PAL champion and will be aiming to win here as well.

Girls 3200
The section title in this event will either go to Anna Weirich of Harker or Sylvana Northrop of Monta Vista. They will race together at the front of the field and whoever is feeling best in the last 800 will win here. final. Their fastest competitor is Nolan Topper who has run 8:52.95. He will press the pace and make this a truly fast race which will definitely narrow down the contenders. His brother Galen has also dipped under the 9-minute mark this season but is slowly recovering from an illness. Aptos senior Ben Laughlin displayed quite a kick last Saturday and could be a dangerous threat if he is near the lead.

Girls 1600 Relay
The St. Francis girls will win this event and more than likely wrap up the team title here. The only suspense is whether they can improve their season-best time of 3:57.01 which currently ranks them as the 8th fastest team in California.

Boys 1600 Relay
The Los Altos boys have the fastest time in the section this season and seemed primed to run even faster in the final. Their main challenger will be a familiar contender here as the Serra relay team will chase another section title in this event.

Albert Caruana is a coach and regular contributor to MileSplitCA, serving as the NorCal editor.