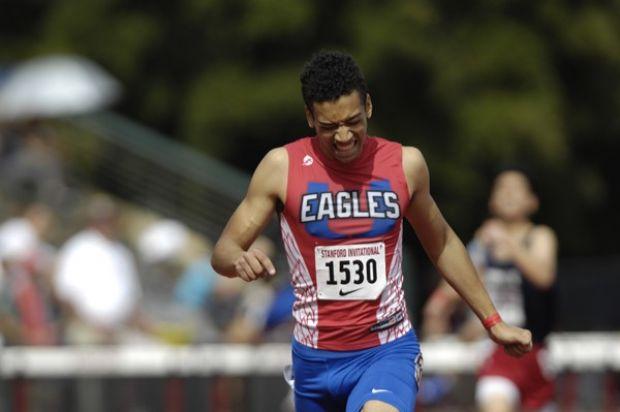 Clayton Valley's Aiden Jackman scored three victories at the Stanford Invite with wins in both hurdle races as well as a member of the 1600m Relay. (Eric Taylor photo).

The most prestigious high school track and field meet in Northern California, took place this past weekend and it did not disappoint. With several out of state athletes as well as some of the top teams/individuals from the Southern Section, the result was a slew of outstanding marks as well as several national leaders.

On the track, the girls' 3200m led off the festivities with Claudia Lane making her outdoor debut in her best track event. Since this was the first time that the 3200m was contested at Stanford, Lane set the new meet record as well as well as run the CA #3 time of 10:24.72.

For the boys, Liam Anderson of Redwood was equally as dominant in rather warm conditions as he won the inaugural 3200m for the boys with a winning time of 9:08.93. Despite a very controlled looking effort, Anderson just missed his PR which he set at the Dublin Distance Fiesta earlier this season.

The next track event for the high schoolers was the 400m hurdles. Kirsten Carter of Santa Rosa HS won the girls' competition racing out of lane 8 with the US #2 time of 62.18. Only Western Branch HS hurdler Adrianna Shockley has run faster with her 61.99, also set this weekend. For the boys, Clayton Valley senior Aiden Jackman rolled to best of 52.85 which is US #1.

The first girls' relay of the meet took place next with the always popular Distance Medley Relay. Through 3 legs, Great Oak held the lead as Fatima Cortes took the baton with Santa Cruz's Mari Friedman in hot pursuit. Friedman took the lead with two laps to go and held on for the win with a near meet record 11:51.30. Great Oak finished in second with a US #2 11:54.17.

Great Oak came up north to face two of the best distance programs in Northern California, Bellarmine and Dublin, in the DMR. Alex Scales led off for Bellarmine giving them the lead that they kept through some of the 800 leg. Going into the anchor leg, it was Heritage, Bellarmine, Dublin and Great Oak. Carlos Carvajal brought Great Oak all the way back and sped away to victory. Bellarmine edged Dublin at the line to make those three teams the fastest 3 teams in the nation.

In Friday's field events, Logan Flores of Gilroy was the only vaulter to surpass 15 feet. His winning mark of 15'0.25" is just off his best mark of the season at 15'1" which places him at CA #9.

In the long jump competitors, Kimball's Jaala Downes won the girls' competition with a leap of 19'2". Her best mark of the season at 19'5" puts her as the second-best long jumper in California. St. Mary's Berkeley jumper Kali Hatcher jumped to a season-best 18'11.75" for the close second-place finish.

In the boys' competition, St. Mary's Berkeley sophomore Malcolm Clemons showed that he is ready to challenge for a state title this year. As a freshman, Clemons finished in 7th place with a best of 23'1". Here Clemons leaped to a personal best 24'5.5" which places him at US #1 and also broke the meet record which was formerly held by Ken Frazier of Mission-SF and set in 1981. In second place was Great Oak's CJ Stevenson who won the 2017 state championship in the triple jump. He set a new Great Oak school record in the long jump at 23'10.25".

Following the trials of the 400m relays on Saturday, the girls' 1600m got the HS finals underway. In a loaded field, it was La Costa Canyon's McKenna Brown who held off a strong charge from Mari Friedman down the stretch to record a lifetime best of 4:47.61. Friedman finished a strong second in 4:47.89 with CA state meet defending champion Maddy Denner in 3rd with a time of 4:48.54.

For the boys, Bellarmine's senior Alex Scales made it two Stanford Invite wins in a row in this event. He led early and then allowed a few other runners to get their names mentioned on our live feed. Scales dropped as far back as 5th during the final lap but as many of us have seen before, Scales powered past of the runners in front of him to take the win with a time of 4:13.87. Jett Charvet of Heritage finished in 2nd place with a time of 4:14.31 followed by Liam Anderson in 4:14.98.

In the girls' 4 x 100m relay, Sheldon proved to be the fastest team in the field with a winning time of 47.58 that places them as CA #6. For the boys, Pittsburg had the fastest time in the trials with their 41.95 but it was the Great Oak boys who won the final at 42.37.

In the girls' 800m, several of the top girls in California who did compete here at Stanford chose to take on other distances and events. Santa Cruz senior Anaya Ward tore to the lead early and maintained it throughout the race to record a near personal best of 2:14.59. Just like some of the top girls, many of the top 800m runners chose other events so Carlmont's Ryan Wilson kicked to victory in a season best of 1:54.92.

In the girls' 400m, Newark Memorial's Alexis Surrell proved to be the class of the field as she led the entire way to a season-best 55.34. In the boys' race, Marin Catholic's Max Glasser continued his strong season with another personal best of 47.31. Monterey Trail's Zachary Larrier snuck past Karson Lippert of La Costa Canyon for the 2nd place finish and 47.50 lifetime best.

In the girls' 100m Hurdles final, Jazlynn Shearer of Silver Creek left no doubt from the start as she stormed to victory with a lifetime best of 14.09 wind-aided (+2.3) effort. For the boys, Clayton Valley's Aiden Jackman continued his impressive senior season with another lifetime best of 14.03 which is CA #1.

In the 100m sprint final, Amira Young of Young HS edged out Chinyere Okoro of Amador Valley by the slimmest of margins 11.822 to 11.823. Young had the lead for most of the race before Okoro got a narrow lead but was outleaned at the finish line by the New Jersey sprinter. Dorien Simon of Lakes HS out of Washington was the dominant sprinter here with an easy looking victory in the final with a time of 10.65.

In the final competition of the day, the Sheldon girls proved to be the dominant team in the sprint relays with another victory in the 1600m relay. They led the majority of the race and won comfortably with a time of 3:55.62. Central out of Fresno were equally as dominant in the 3rd heat and ran well enough to finish in 2nd place overall with a time of 3:56.35.

The Clayton Valley boys and more specifically Aiden Jackman wrapped up another victory at the Stanford Invite in the 4 x 400m relay. Jackman ran the 2nd leg and gave Clayton Valley a nice lead which their anchor was able to keep to record a 3:21.15 winning effort. Clayton Valley has actually run a faster time this season in a dual meet at 3:20.99 that puts them at CA #6.

The girls' triple jump was worth of a state final as four girls surpassed forty feet. Arianna Fisher of Silver Creek won with an impressive 41'1.5" followed by Allanah Lee of Castro Valley in 40'11", Jazlynn Shearer at 40'6" and Kali Hatcher in 40'1.25". For the boys, Pittsburg's Teaun-Tr'e Pierce had the best performance of the day with a second jump of 47'8".

In the girls' high jump, Fortuna's Katie Hurst was clean through 5'6" before three misses at 5'8". San Luis Obispo jumper Anneke Moersdorf also jumped over 5'6" but had several misses which placed her in second place. 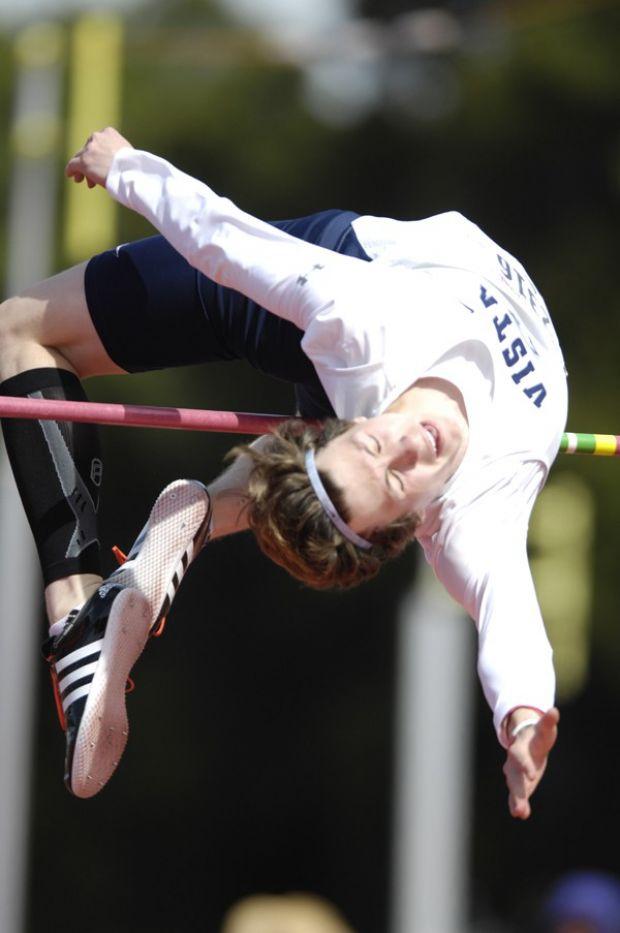 In the boys' high jump, Vista del Lago senior Jake Grimsman had quite the competition as he sailed over 7'3" on his second attempt. Montana state record holder Trey Tintinger managed to clear 6'9.75" but that was just good enough for 2nd place. Grimsman took a shot at 7'5" but on his first attempt injured his takeoff foot which ended his day.

In the girls' throwing events, Fowler's Jocelynn Budwig proved to be the best thrower at the meet with a victory in the discus at 162'6" and a second place finish in the shot put at 44'6.25". James Logan's Hannah Hall just edged Budwig in the shot put with a winning effort of 44'7.5".