The Clovis Invitational gets a lot of mainstream media attention every year with its arsenal of top California teams. The Roughrider Invitational, which also takes place at Woodward Park (photo below thanks to Walt Lange, Jesuit HS), always takes place a week later on a Friday. While the teams and individuals at the top may not have as much national or state-wide notoriety, the meet does serve a major purpose as a mini-state meet preview for the participating teams. We'll be on-site Friday to bring you photos of all the races! 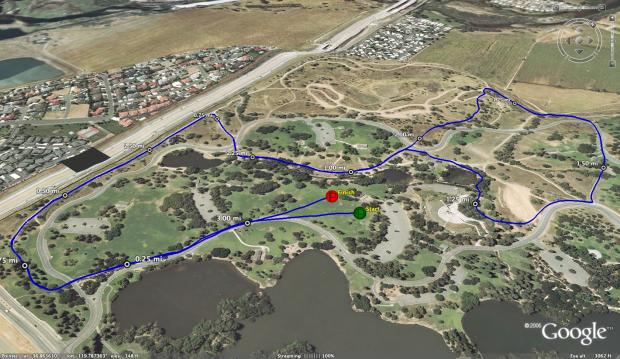 We will focus on the four varsity races which will begin with the Varsity Girls Small school race at 4pm.

The big favorite in this field will be the Campolindo girls. They are ranked as one of the top teams in state in Division III this season and have been a consistent contender for many years which includes three state championships in 2001, 2010 and 2013. They haven't been able to field a completely healthy lineup this season but are getting closer and may be in contention for a state title come November. Their main competition should come from Central Section's McFarland and Southern Section's Bishop Amat.

Individually, Jenna Miles, Campolindo, has been the most impressive runner for her team so far this season. She is coming off an invitational victory at the Capital Cross Challenge and will be favored to win. Her main competition should come from teammate Isabella Chao and Bret Harte senior, Kaela Dishion.

For the boy's small school division, Campolindo will contend here as well but they will have a tough obstacle in local juggernaut, McFarland.  Campolindo will be led by Teddy Buckley who will look to lead the boys to the team title. McFarland will be led by senior Seth Diaz who has been their most consistent runner this season.

The top individual returner from last year's meet is Mohammed Ali of Avenal. He narrowly missed the victory last year with a 2nd place finish by a mere .8 seconds (15:47.8). Jose Mosqueda of Kerman also dipped under the 16-minute mark (15:54.6) with a 4th place finish. Look for the Campolindo and McFarland packs to be up near the front as each individual finish will be quite key for the team victory.

The large school girl's varsity race should be a battle with local Central Section schools like Madera South, Madera, Clovis East, Monache and Liberty, Bakersfield. The team trying to break up the Central Section sweep will be traveling from the south in the form of Long Beach Poly. The team race appears to be wide open and any of the teams mentioned above will have a shot for the victory. Leading the way for Madera will be Unique Ford who traveled quite a distance along with her teammates earlier this season in getting a 2nd place finish at the Pacific Tiger Invitational. She will be joined in the lead pack by Ryley Fick of Centennial and Veronica Ortega of Madera South. Watch out for Gregori freshman Madison Kackley who has two invitational victories to go along with her league victories as well.

The large school boy's varsity race will be a little deeper than the smaller school race which means the winning score may exceed 100. The favorite at this point is Gregori HS out of the Sac-Joaquin Section with their two talented front-runners, Mason Reeves and Santiago Ruiz. They have been near the front of most of their races but they will be chasing a couple of other talented runners. Ivan Mendez of Monache has recorded an undefeated campaign so far and will be one of the favorites. He will have his hands full with 800-meter specialist Moises Medrano (Highland High Bakersfield) who just ran a lifetime best 15:23.3 at the Clovis Invitational. Also in the mix will be Nevada Union runner, Garrett Gough.