SAN DIEGO -- The San Diego Section has been a factor at the past few State Meets and based on the performances at Saturday's section championships at Morley Field, it looks like they'll be strong again.

For starters, Francis Parker's Kenan Pala ran 14:22.3, the fastest time since the course was changed in 2017 eliminating one of the Upas Street hills and replacing it with a flat section to retain the 2.96-mile distance.

The previous best was 15:03.5 by Cathedral Catholic's Joaquin Martinez de Pinillos in 2017, the year he won the state Division III crown.

The girls got into the act as Sage Creek's Stormy Wallace roared through the finish line in 17:20.9, almost six seconds faster than Rancho Bernardo's Jacey Farmer who won Division I at 17:26.8.

The Sage Creek girls won their fourth straight section title and will be seeking their third consecutive state title crown.

Here is a division-by-division wrap-up of the section championships: 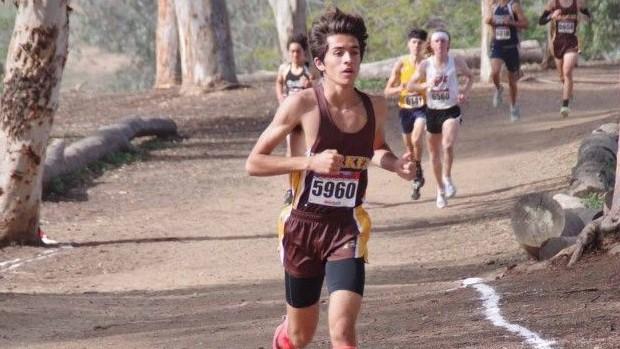 Pala grabbed the lead right out of the chute and never looked back with the scorching-fast time.

"I'm excited about State. I want to set the Division V record."

That record would be a 14:59 and since Pala is unbeaten this year, that mark could very well be in jeopardy.

"I'm going to give it my all at State. Don't be surprised if I get to the finish line and fall," said Pala.

The victory also helped the Lancers win the team title with a 41-45 victory over Santa Fe Christian.  While SFC did better with runners 1-4 (22-31), Parker not only outscored SFC 12-23 with runner No. 5, the Lancers placed their sixth and seventh runners in front of the Eagles' No. 5.

Sage Creek's Bryce Gilmore tossed out the challenge when in the second race of the day he went wire-to-wire in 14:56.4 to win the division by a whopping 42 seconds.

"I went out to win and I knew I had to give it my all if wanted to break 15 minutes," said the Wake Forest-bound senior. "As I approached the finish line I saw I'd have to pick it up. At the end of the race, I was racing the clock.

"Right now I'm at 85 percent. It's so much better to have a natural season like this instead of what we had during COVID-19.  I'm looking for a top-three at State." One of the biggest upsets of the day came in the team race where unsung Hilltop trimmed Cathedral Catholic 95-110 behind a second-place finish from senior Jimmy Byland.

Not only that, but La Costa Canyon junior Jacob Niednagel gave Mavericks head coach Bill Vice an individual title in Vice's last season with LCC. Niednagel surged past Byland in the final 50 meters to clock a 15:16.6 to Byland's 15:21.4.

"Coach Vice gave me confidence and I wanted to make coach proud," said Niednagel. "I was pretty confident even when Byland got the big lead. I stayed as close as I could and when I had a chance crossing the last street, I went past him"

Vice was proud as a new papa.

"That was no surprise to me," said Vice. "He was fifth in the section 3200 and he's just gotten better and better.  He's the leader of this team where he's a junior and the others are sophomores.

"I got Emma Abrahamson, Steven Fahy, and Kelly Lawson (all LCC stars of the past) to come and cheer him on."

While Mt. Carmel has been the No. 1 team in San Diego all season, Grossmont has been pushing and finally, the Foothillers made a major statement, beating the Sundevils 34-45.

Although Mt. Carmel junior Tommy Bell won the race in 15:30.7, Grossmont's Ian Rosen was right behind at 15:35.8.  Mt. Carmel's Owen Conner kept the back and forth in Mt. Carmel's favor, edging Russell Blakely for third but the Foothillers went 6-8-14 for the win.

"I think the Grossmont runners were trying to wear me out using different runners but it's a common strategy and I didn't let it bother me," said Bell. "I was just looking for a top-10 finish to qualify for State.

"The announcer was saying we were No. 9 in the state but it was hard to determine, kind of ambiguous. When we raced Grossmont before, at 2.8 miles, they were all under 15 minutes. This was fun."

The Otay Ranch boys won their first section title by placing all five of their scorers in the top 16, with senior Aydan Wohlford leading the way in seventh at 15:50.5.

"This really was a team effort," said Wohlford. "There were several places along the way I could take a peek to see how our runners were doing and I could tell it was going well. State should be fun -- we don't worry about Newbury Park or other teams. We just want to all do our best."

Individually, Patrick Henry's Preston Bowlds cruised in with the victory in 15:24.3, nine seconds ahead of San Marcos' Carlos Alvarez (15:33.1).

If you thought the Division V boys' team race was close, the girls race was even closer. Both schools scored 54 points and Parker prevailed when its No. 6 beat SFC's No. 6 for the win.

Overall, SFC's Revere Schmidt, who plays numerous sports and is a high-quality swimmer, won at 17:51.4. Eloise Martenson added a sixth (after displacing individual runners) but Parker went 8-9-10-11 to set up the win.

"I like competition and it wasn't like when I was a freshman," said Schmidt. "As a freshman, I took it out way too fast because I didn't know what I was doing. I love that we're back to normal. Stormy Wallace came into the championships looking to break her sister Skyler's best time while also aware that this would be her final section championship cross country race.

Clocking 17:20.9, she accomplished her first goal, bettering Skyler's 2019 time of 17:32.14, while also leading the Bobcats to their fourth consecutive team title with a scant 22 points.

"I ran whatever felt fine," said Stormy, who is headed to UC Davis. "I just wanted to lead line-to-line. I knew 800 meters into the race that I was going to win and now I look forward to running at Woodward Park."

"It was a challenging race for sure but I was happy to beat the other Compton," joked Sophie, who topped LCC's Kyra Compton by six seconds. "I felt like I wanted it a little more.  I train with the girls and they push me but sometimes coaches let me run against the guys. Poway's Mackenzie Rogers (17:40.5) ran away from everyone, even her teammate Tessa Buswell (18:26.2), who placed second as the Titans had all five scorers among the top 16.

"I was sick for two of the biggest races this year, Dana Hills and Woodbridge, which put me in a mental rut, but I was ready today. I learned a lot of things when I was struggling, things like how to take care of yourself fueling (eating), sleeping, and with the chiropractor.

It would have been no surprise to anyone three years ago that Rancho Bernardo's Jacey Farmer captured Saturday's individual title with a late kick.

A State Meet finalist in the 1600, she looked to own the future.  But trying to juggle running with soccer, she suffered through two years of sub-par performances.

"I started to think that I'd never regain the way I ran as a freshman," said Farmer, who dropped soccer last spring.

But last week, at the Palomar League finals, she won going away and regained her confidence.

"Today hurt," admitted Farmer who broke away over the final 800 meters to win in 17:26.8, four seconds ahead of El Camino junior McCall Dame 17:30.5. "Getting a PR last week boosted my confidence.

"I'm a nerd, I look up every girl I'm going to run against just to know how they'll stack up.  It's fun again."

Steve Brand is a freelance writer and the San Diego Section editor for MileSplitCA.