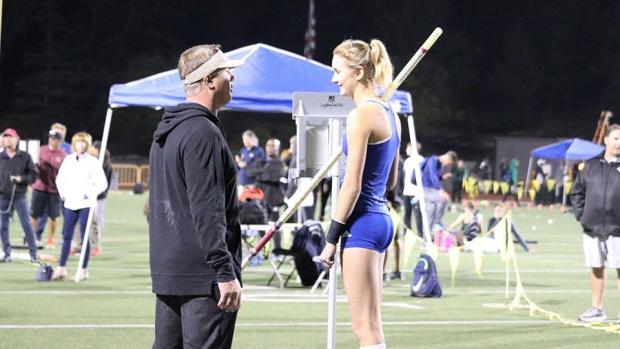 Oaks Christain junior Cristian Moore took down the 100-meter record with a wind-legal 10.59 (2.0 meters per second), lowering the standard of 10.63 clocked by multiple runners.

And, when the meet was over, teams were packing up and most of the crowd was left, Westlake freshman Paige Sommers cleared 12-9 in the pole vault to not only break the previous meet record of 12-7 set by Holly Tokar (Ventura) in 2013, but also raise herself to the No. 1 ranking in the US among girls in the class of 2021.

Sommers (Jeffrey Parenti photo above) made three attempts at 13-0, which was announced as the state record for the class, and nearly cleared on her final attempt before the bar wiggled and hesitated before falling onto Sommers.

She wasn't the only Ventura County star to defend a title.

In defending her County Championships title in the 200, Nowling was a little slower year-over-year (24.32 vs. 23.78 in 2017) but it was enough to hold off the youthful charge behind her from a pair of speedy freshman sprinters in Oaks Christian's Jahzara Richardson (24.87) and Oxnard's Arissa Thompson (24.91).

Oaks Christain senior Talin Lewis, just rounding back into condition following an ankle injury suffered during the basketball playoffs, set PRs in three events and also anchored the winning 4x400 relay team (3:23.27). Lewis won the 300 hurdles (38.36) and was second in both the 110 hurdles (15.08) and runner-up to Jones in the long jump (22-04). Lewis, who was third in the 300 hurdles here last year (40.04), is a two-time CIF-Southern Section divisional finalist in the 300 hurdles (runner-up last season in D4).