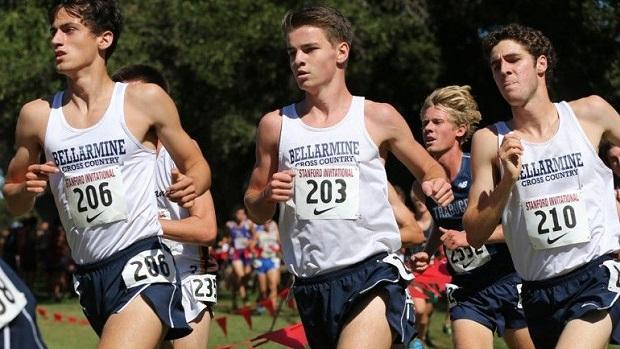 Can the Bells go from 6th last fall to a podium finish in 2016?  Both their returning times and their track results say they can.

Only one team in California can clearly boast about having better returning 5-man 1600 results from this past trac season than Great Oak, and that's Bellarmine College Prep.  The Bells posted an average of 4:21.5 this spring, with 4 runners at 4:21 or better.  This team also put 3 returners under 9:30 and 6 under 10 minutes in the 3200, with last fall's #3 runner, Dylan Doblar, leading the squad (and watch out for Neerav Gade, a rising junior who ran very well on the track.  Of course, track results alone do not make a contender. Bellarmine returns 4 of their top 5 from a 2015 squad that dominated the Central Coast section and finished 6th at the CIF state meet.  That doesn't even include Benjamin Micallief, whose cross country season ended in October (he went on to clock 1:52 this spring).  Looking at 5K results you would think that the team lacks depth after the #6 returner, but when you check them at 3 Miles you get the full story: despite running on tough courses like Crystal Springs and Mt. SAC, the team had 19 runners under 17 last year.  With 4 returners that have already broken 15 minutes, Bellarmine has enough firepower to earn a spot on the podium this November, provided they stay healthy this time around.