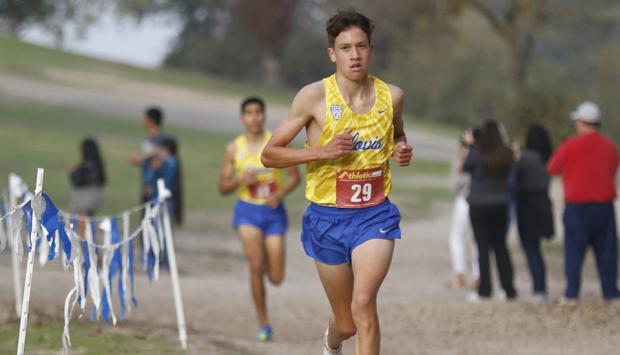 This article has been updated to correct the results and State Meet qualifiers in girls Division III.

FRESNO -- Highlights were plenty throughout the 10 division races at the CIF-Central Section Cross Country Championships on Thursday at Woodward Park, with some usual suspects out front.
Junior Sydney Sundgren rolled over the 5,000-meter course in a meet-best 17 minutes, 35.12 seconds in leading Buchanan to a defense of the CS Division I title it won back in 2019. The Bears, who went 1-2-3-5-6 for 15 points -- all under 18:17 -- are also the defending State Meet champions in the large school division.
Buchanan, which set a course team time record of 89.35 -- sixth all-time at Woodward Park -- and put all seven runners into the top nine, won the section title for the fifth season in a row, 19th time in the 2000s and 23rd time dating to 1993.
Grace Hutchison, who like Sundgren, helped Buchanan to that title two years ago when both were freshmen, was second to her classmate here in 17:39.45. This season's freshmen sensation, Elliana Lomeli, crossed third in 18:02.58.
Other large-school highlights from the meet that additionally serves as a qualifier for the Nov. 27 CIF-State Meet --  also at Woodward Park -- included Sanger winning both titles in D-II, the Clovis High duo of Chris Caudillo and Nathaniel Avila dropping the two fastest times of the meet, while in the same Division I race, it was Madera South taking the title.
Each division is allotted either two or three automatic team berths into the State Meet. A maximum of five individuals not on a qualifying team who place among either the top 14 (for divisions qualifying three teams) or the top 12 (for divisions qualifying two teams) also advance to compete at the State Meet. (Qualifying teams and athletes are noted below.)
A division-by-division recap of Thursday's championship meet:
DIVISION I GIRLS
Rounding out the section title and team time record for Buchanan were freshman Sierra Cornett, another youthful star for the Bears, who was sixth in 18:13.34, and senior Caroline Mendyk, who placed seventh in 18:16.87.
Breaking up the Buchanan party was senior Miliana Perez, who placed fourth in 18:08.59, and junior Ashlyn Leath, who was fifth (18:11.99) for team runner-up Clovis North. Two more Buchanan runners -- Stefania Sesock (18:25.82) and Kaylee Elliott (18:37.82) -- crossed before Clovis North's No. 2, Gianna Bomarito, who placed ninth (18:39.03). Arroyo Grande's Jenna LeNay was 10th in 18:47.42.
State Meet Qualifiers
Teams (3) - Buchanan, Clovis North, Clovis West
Individuals GIRLS
Corrected: Highland took the top two spots as well as the team title. Sophomore Mia Torrecillas was an 18-second winner in taking the section championship (18:24.14) with junior teammate Lianna Guerra next in 18:42.22. Independence sophomore Trinity McLean was third in 19:34.25. Priscilla Raya was fifth overall in 20:23.16 to lead Wasco, which placed second, earning the division's other berth to the State Meet. Ixchel Sanchez was next across for Wasco, in 17th place (21:33.97). Sophomore Jasmine Vasquez ran No. 3 for Highland, placing 19th in 21:28.48.
Araceli Medina of Pioneer Valley was fourth overall in 20:03.03. Templeton placed two among the top 10, freshman Keani Neuhs finished sixth (20:21.62) and senior Madeline Bobbitt was ninth (20:30.57). Lindsay freshman Melanie Nevarro closed out the top-10, running the course in 20:37.33.