St. Francis girls won both relays including the 400 relay above. (Malcolm Slaney photo)

Wrapping up the 2021 track and field season with a closer look at each of the CIF sections, highlighting 10 things that impacted the season.

Here we focus on 10 things to note from the Central Coast Section:

1. Bellarmine Distance
As a result of Covid, the Bellarmine boys were denied a chance for a state Division I championship as well as a shot at an NXN title in the fall. They more than made up for those losses during the just-completed Track and Field season. The trio of Colin Peattie and Nolan Topper and Galen Topper all dipped under the 9 minute mark during the season to join a very exclusive club of school's with 3 or more sub 9 minute 3200 meter runners. At the CCS final, Bellarmine rallied late to score 24 points in the 3200 meters which led to another Track and Field team title. Lastly, Nolan Topper finished his season with a spectacular performance at the Brooks PR meet to establish a new section record in the 2 mile at 8:51.83. 2. St. Francis, Mt. View girls team
The St. Francis, Mt. View girls won the team title more convincingly and much less dramatically. They won both relay races led by all-section sprinter, Kaley Patterson. She also won individual titles in the 100 and 200 along with teammate Isabelle Cairns who won the 400. CCS competition for girls goes back to 1974 and the St. Francis girls have been one of the best programs in the section with team titles in 2016, 1993, 1989, 1988, 1987, 1986, and 1984.
3. Luci Lambert Sacred Heart Prep
As a freshman, Luci Lambert qualified for the CCS finals in the 1600 and had a personal best time of 5:05.03. Fast forward to her senior season and Lambert was the most impressive distance runner in the section. She had the fastest times in all three distance races with 2:11.35, 4:54.36, and 10:46.86. She also won the section titles in the 1600 and 800 where she recorded her personal bests.
4. Charlie Dang Silver Creek
The most dominant athlete in any event was Silver Creek senior Charlie Dang. He won his second section title in the discus by nearly 25 feet as he recorded a best of 193-8.5 during the season. That mark put him as the second best discus thrower in California trailing only Ugonna Ikejoifora of Downey who threw 193-10. 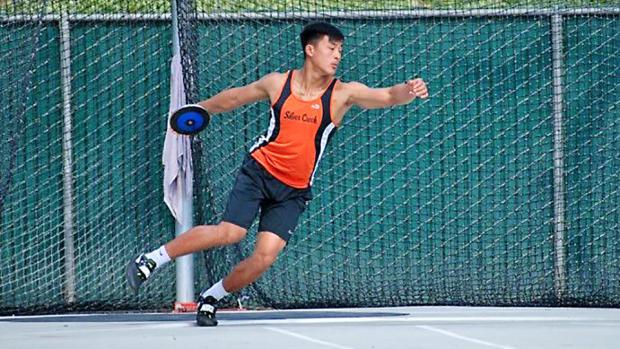 5. Aaron Kim Palo Alto
In the history of the Central Coast Section, there have been six athletes who have cleared and surpassed the 7 foot barrier in the high jump. The 6th athlete was added this season as Palo Alto senior Aaron Kim cleared the bar at 7 feet at the section final. He came into the meet with a best of 6-8 but entered the competition at 5-10 and didn't stop until he cleared the historic barrier.
6. Boy's 1600m
From looking at past results, running faster than 4:20 in the 1600m typically put you in contention for a state meet berth with a top 3 finish. This season, 8 boys ended up running faster than 4:20 at the section final making this the fastest 4 lap competition in history. Following a fast early pace set by Scotts Valley junior Jeremy Kain, Bellarmine senior Nolan Topper took over pacing duties and held the lead until being overtaking by Mitty senior Taylor Iden. Iden raced down the stretch only to be overtaking at the finish line by Topper as they recorded 4:07.97 and 4:08.05 bests respectively. Both times surpassed the previous finals championship record of Willow Glen's Mark Stillman who ran 4:08.7 in 1977.
7. Junipero Serra 1600 relay teams
Starting in 2014, the Serra 1600 relay team started a streak of 5 section titles in the event from 2014 to 2018. Their streak was broken by a talented Los Gatos group in 2019 as the winning team ran 3:20.86. Serra was a valiant 2nd that year with a time of 3:21.68. This past season, the Serra boys won their most unlikely section title in the event. They finished in 3rd place at their league finals which was just short of the top 2 auto qualifying spot. The winning Bellarmine team was DQ'ed which gave the Padres team new life. They advanced to the final and won their 6th section title in the event.
8. Section championship at Soquel HS
A few sections in California were not able to contest their section final due to complications with Covid. The Central Coast Section admins were determined to contest a section final. Over the past few seasons, Gilroy HS was the host school but Santa Clara County did not approve the site for this season. Thankfully, Santa Cruz County approved Soquel HS as the host and the section final was saved. It should be noted that on the date of the final, the weather at Soquel was fairly mild compared to the mid 90s that were recorded in Gilroy. Whew!
9. Yutaka Roberts El Camino
One of the hardest doubles in Track and Field in California is the 400/800 combo. El Camino junior Yutaka Roberts was able to not only navigate the tough double but win both events to record his first two section individual titles. He recorded a best of 49.56 to win the 400 and then with a very short break returned to win the 800 in a PR matching 1:53.32.
10. Maia Garcia Pinewood and Noah Short The King's Academy
In an unusual year, this spring had many sports taking place that have traditionally been placed in other seasons. One of those sports was basketball and two athletes were able to compete in both basketball and track and field in the spring. Garcia helped lead her team to the open title as they upset heavy favorite Archbishop Mitty. She also finished second in the high jump after winning in 2019. Short led his team to the section final against league rival Sacred Heart Prep. Short also finished in 2nd place in the 100 meters in a spirited race against Stevenson junior Evan Johnson.