The McNatt twins, Anna (right) and Louisa, got the McClatchey girls DMR team off to a fast start on the way to one of the fastest times in the U.S. (Raymond Tran photo)

Wrapping up the 2021 track and field season with a closer look at each of the CIF sections, highlighting 10 things that impacted the season.

Here we focus on 10 things to note from the Sac-Joaquin Section (listed alphabetically):

As a result of the Coronavirus Pandemic, the uncertainty of the impact of the virus into the

spring, and California Department of Public Health guidelines limiting travel, CIF-SJC leadership made the decision in late January to cancel all Season 2 playoffs. This was one of four sections that opted out of spring playoffs, which ultimately impacted the State CIF's decision to cancel the track and field state championships.

Chamberlain, a junior who has already committed to BYU, ran the fastest times in the section

Chilcutt, a junior, is one of the top high jumpers in the state, winning the invitational section at Arcadia (5-4), placing third at CA State Champs (5-3), and hitting a season-best jump of 5-6, equal to the No. 4 highest clearance in the state. This coupled entry recognizes two 12-4-8-16 distance medley relay championship teams from this past spring, the Jesuit boys and McClatchey girls. Jesuit, at the DAL Distance Classic at Campolindo, battled a stacked Bellarmine College Prep team and a John Lester-led Amador Valley team to a 10:07.25 victory that finished No. 2 in CA and No. 6 in the U.S. and No. 8 in CA all-time. Bellarmine's 10:12.66 ranked U.S. No. 9. The Jesuit team was Michael Chambers, Spencer Pickren, Braden King and Ajani Salcido. McClatchey, running during the open section at Arcadia, put together a team of Anna McNatt, Louisa McNatt, Olivia Johnson and Julia Heckey that had never run a DMR before. It all worked out with a time of 12:05.79, a time that would rank CA No. 3 and U.S. No. 10.

Johnson, a senior bound for UCLA, seemingly never stops moving at a track meet. From the 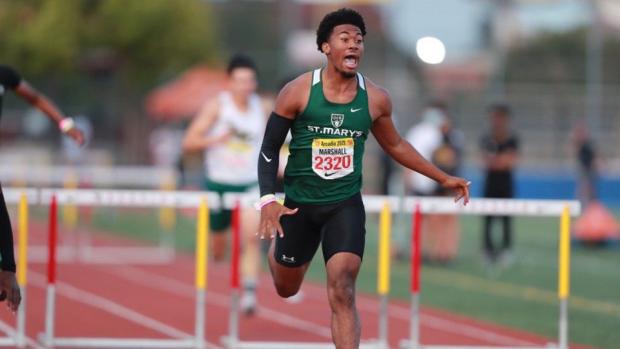 Mellion, a sophomore, had her season cut short because of surgery but nonetheless made an impact. She led the SJS in both throws, hitting her discus throw PR of 160-11.50 at a late-April dual and her shot put PR of 44-02.50 to win at the West Coast Relays. Both of those marks rank No. 4 in the state and U.S. No. 3 in the sophomore class for the discus and No. 5 U.S. in the class for the shot put. Oliver, a senior headed to Cal Poly SLO, capped off her brilliant season over the 300m hurdles by winning the title at the CA State Championships with a 42.83 PR that ranks CA No. 2 and U.S. No. 25 overall. She won the event six times during the outdoor season, including at Eddie Hart, NorCal Champs and Golden West. She also teamed with her twin sister Makayla as part of the section-best 4x100m team that ran 47.18 for third at CA State Champs Prelims. (Makayla Oliver is the section leader in the 100m and 200m.)