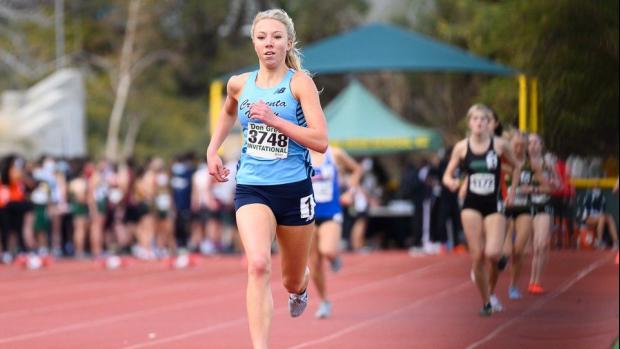 Mia Barnett continued her jaw-dropping senior season when she ran the mile in 4 minutes, 39.41 seconds -- the third-fastest time in California history -- while competing in an open meet Saturday in Irvine.

"It was really fun to see all that strength that she has developed as a runner be utilized in a 1600," Crescenta Valley coach Rob Evans wrote in an email. "Her middle laps were so impressive, and something we talk a lot about in practice. She has felt really confident in workouts and was really excited to come back to the mile after running some 800's and 3200's."

Barnett entered the 2021 outdoor season with a resume that included two-time medalist in the 1600m at the CIF-State Track Meet, three-time CIF-Southern Section Division 5 cross country, and two-time CIF-State D-V cross country runner-up while attending Sun Valley Village Christian (SS). Although she transferred to her local public school, Crescenta Valley, over the 2019-20 winter break, she wasn't able to officially compete for the Falcons until March of this spring.

Competing in an open men's 800m field, John Lester, a senior from Amador Valley, ran the fastest two-lap race by a CA high schooler this season (U.S. No. 2) with a 1:49.77. The Stanford-bound senior is still working his way back from a stress reaction injury over the winter and continues to show progress back toward his 1:48.26 PR (CA No. 5 all-time).

Running in an open 1500m race, Colin Sahlman, a junior at Newbury Park, posted a time of 3:46.39. Despite finishing 11th in his heat, the high schooler's time ranks among the top 10 in CA history.