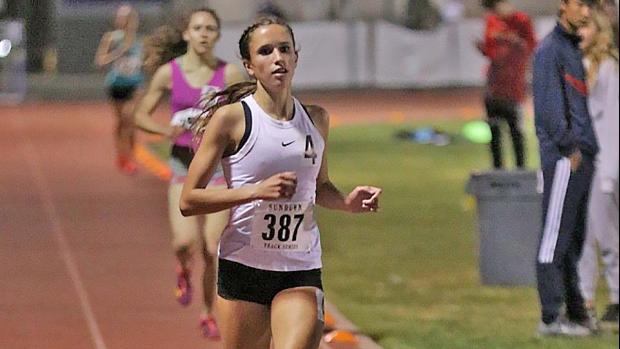 A year ago, the then-Bears freshman ran both the 1600- and 3200-meter races at the Classic, collecting personal records in both events, while looking forward to getting better if everything went well.

It didn't. Not for her nor any other athlete as the coronavirus abruptly ended everyone's dreams in mid-March.

While the Buchanan Distance Classic was basically the last invitational meet a year ago, Sundgren is hoping this time it's the start of something big.

Sundgren and her cross country teammates were coming off a stunningly successful season in which the Bears upset favored Temecula Great Oak with the 15-year-old leading three freshmen across the line in sixth place.

"My goals last year going into the Distance Classic were to break 11minutes in the 3200 and five in the 1600," said Sundgren who accomplished half of her goals by clocking a 10:59.28 in the longer race after collecting a PR in the shorter event at 5:09.86.

"It was a little upsetting not breaking five, considering what happened (the season ending suddenly). Now, I still want to break five for the first time and run something in the 10:30s or so in the 3200."

In a way, the coronavirus has helped Sundgren to focus. While she clearly favored cross country a year ago, now she can't wait to get on the track.

"I feel good and I feel strong," said the sophomore who has already scorched a 10:31.80 for 3000 meters in a dual meet and posted an 11:06.30 over 3200 meters running at the Sundown Track Series in Arizona late last month. "It'll be different than last year and it's hard to just push yourself, so I'll use the clock to gauge where I'll be and see what happens."

Because of limitations imposed by the state, there simply can't be any competitors from out of California and even many of the better in-state runners are restricted to the meets they can attend.

But it's a start and there figures to be no shortage of runners testing Sundgren, who no longer is an unproven freshman. Put that bullseye on her back. 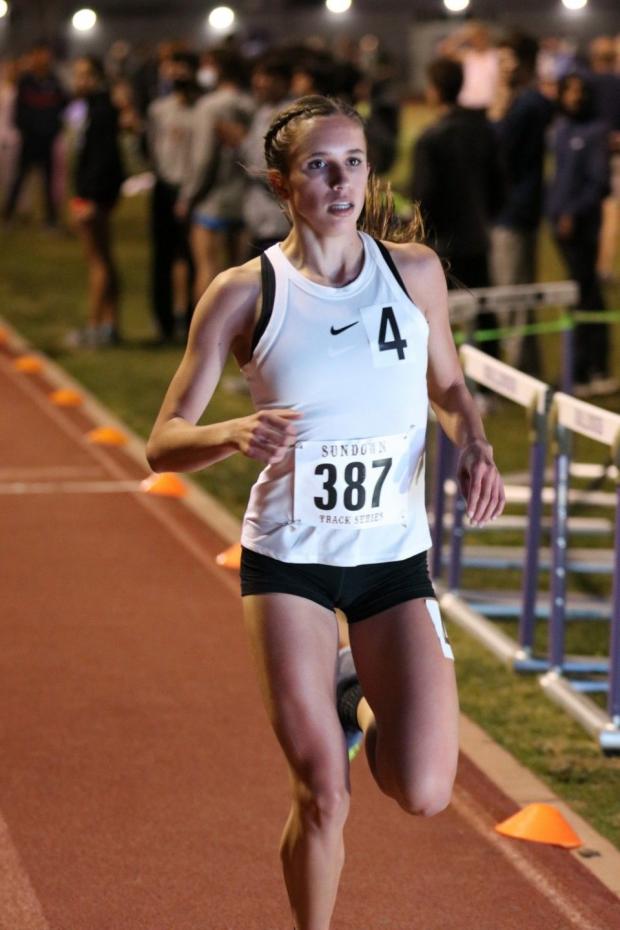 Although everyone knew Corie Smith (now at Arkansas) would push for the individual title in Division I (she finished second to San Diego Canyon Crest's Carlie Dorostkar in the second-fastest time of the day, 17:00), the question would be how would the three precocious ninth-graders fare?

Even Coach Brian Weaver was guarded heading into the race over Woodward Park's familiar 3.1-mile course.

"We knew we had three talented freshmen coming in from Alta Sierra Junior High and other teams had done it before with freshmen," said Weaver, now in his 30th year at Buchanan, the last 27 as head coach. "They actually brought a different dynamic. Now the other girls had to work harder; there was a lot of motivation.

Sundgren's top-10 finish in sixth in 17:47.7 was even better than Weaver had hoped. Grace Hutchinson placed 14th at 18:02.9 and Caroline Mendyk, the third 9th-grader, was 33rd overall in18:21.7. When then-junior Morgan Hutchison placed 40th, everyone looked to Sean Laughlin, the official timer, to give them the news -- good or bad.

Although Great Oak had all five of its scorers in the top 28, the Wolfpack's highest-placing individual was 10th and when all of the individual competitors were eliminated, Buchanan was able to celebrate the championship, narrowly low-scoring Great Oak 67-71, by far the closest team race of the day.

Weaver knew from experience not to celebrate too soon and had waited as Laughlin double-checked everything before breaking the news. "We all had finished and were walking back to the tent when Coach came and told us we won," said Sundgren. "It took me a little while to process what had happened. It finally hit me when we got our awards. I thought, 'I'm part of this, I'm part of this team.' "

While Sundgren's performance was outstanding, Weaver can't say he was surprised.

"Sydney has zero fear," explained Weaver. "She's very quiet, she doesn't say much, but she has confidence in her running, especially when she gets to the starting line. It's like she says it's time to go to work, then she has that eye of the tiger.

"In that way, she reminds me of runners like Corie Smith, Meagan Lowe, Hannah Benoit and Lauren Sayler. She's not scared of any challenge; she'll take on anyone. She has time to see how good she can be, but she could be as good or better than any of them. She has that good engine and because she was a gymnast, she's strong.

"Sydney has great range. We're going to work with her to negative split, to see what she can do when she's really tired."

That, says Sundgren, is one of her goals. She admits she prefers to take out the pace and push, trying to take away the kick from runners who finish with a flash.

"I try not to worry about the others too much, just run how I feel. I'm really excited, though, about finally getting to compete this spring. It has been too long."

Should things go well and Sundgren qualify for the state championships, on the calendar for late June at Buchanan High, it won't be her first experience for that level of competition.

As is the case for several Alta Sierra runners, she worked the state championships in 2018 and 2019. As a member of the hurdle crew, she was able to cheer on the Buchanan runners from up close as the Bears girls won the CIF-State title.

GET VERIFIED BY CLAIMING YOUR MILESPLIT ATHLETE PROFILE

Steve Brand is a regular contributor to MileSplitCA.