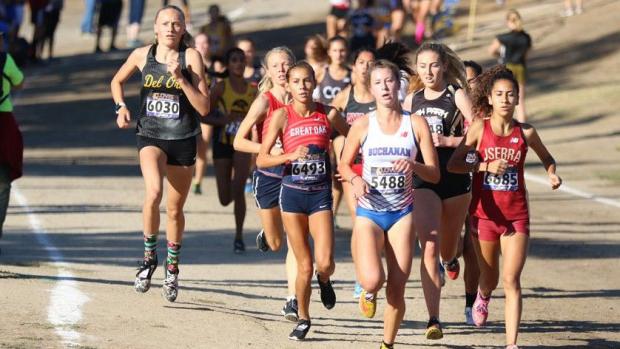 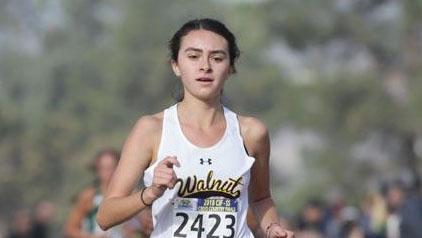 finished no less than second! She teamed with twin sister Emma to lead Walnut to a State Meet berth for the first time in program history. Chloe followed her runner-up finish at the SS Championships, with a 17:39.40 5K PR for fourth at State. That time was the seventh fastest on the course at the meet and fifth among seniors, earning her a trip to Portland to run at NXN for the first time. To summarize her season, she won six races, was second once (SS Finals), third twice (Woodbridge and Mt. SAC) and fourth at State. Also of note, she won the Hacienda League title for the fourth consecutive year. MileSplitCA All-State Senior class first team selection. Headed to UC Davis.
Interviews: Southern Section | State | Announces College Choice |
Races: Woodbridge | Mt. SAC | State |
RILEY CHAMBERLAIN
Del Oro/SJ | Fr. |
Bio: Unquestionably CA's top girl in the Class of 2022. State Division III champion, running 17:18.60 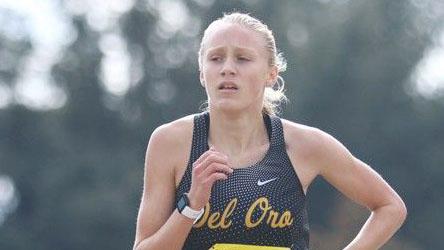 unchallenged, the fastest time at the meet regardless of division, earning an individual bid to run at NXN. Won races at 12 of the 14 meets she entered, including Varsity Division 3 races at Stanford (17:58.20), Mt. SAC (17:42.00) and the Sac-Joaquin Section Finals (17:57.00). Placed second overall at Clovis to Tori Gaitan while running a 5K PR of 17:12.70 and beating Corie Smith, Meagen Lowe and Sarah Shulze on the Woodward Park course. That was the third-fastest 5K time in the state this season and fourth fastest nationally among freshman. MileSplitCA All-State Freshman first team selection.
Interviews: Mt. SAC | With team at Sac-Joaquin Section Finals | State |
Races: Mt. SAC | SJS Finals | State |

Bio: Putting a painful ending to her junior season in the rear-view mirror, Fahy put down one of the great 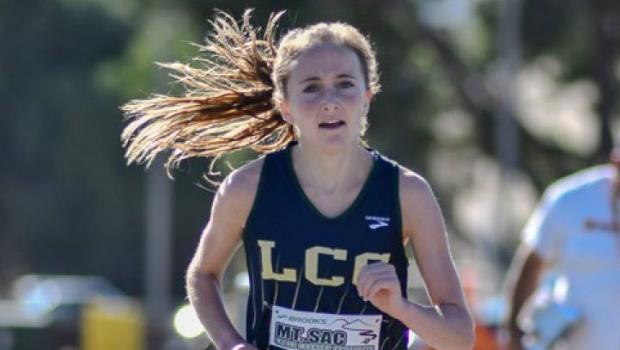 seasons on the books. She swept through her invitationals, taking titles at Mt. Carmel, Stanford and Mt. SAC. She followed that with her third San Diego Section division title, a runaway victory at the CIF-State Meet, and was the fastest girl on the course at Foot Locker West Regionals, qualifying for the FL National Championships. Her 17:08.50 winning time at Stanford ranked as the fastest 5K in the state this season. Her 17:22.60 to win the D-II title at the State Meet was the third-fastest on the course that day. MileSplitCA All-State Senior first team selection. Signed with Stanford.

Bio: A front-runner through and through. Gaitan broke the tape first at Woodbridge in 16:06.10, won the 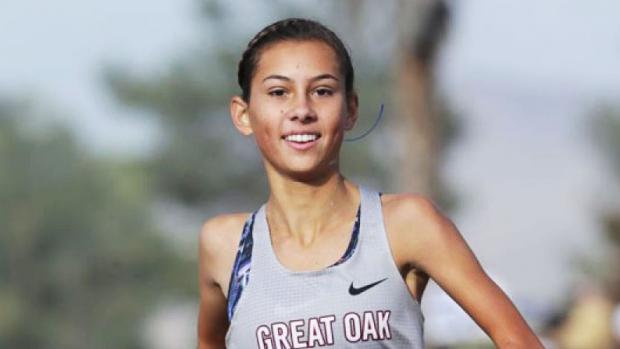 Southern Section Division I title at 16:42.20, and dominated the State Championship at 17:19.40, winning by seven seconds. She led Great Oak to the team title at both the section and state levels. Gaitan placed 18th at Nike Cross Nationals, the first Californian across the line. In summary, she won six races, including Clovis where she ran a 5K PR of 17:09.70, and at Bob Firman. The only race of significance that she did not win before NXN was Mt. SAC where she was second to Kristin Fahy. Her time at Woodbridge ranked as the fastest 3-mile clocking in CA and No. 3 nationally. Her time at Clovis was No. 2 in CA and her time at State was the second-fastest of the CIF Championship Meet. MileSplitCA All-State Junior first team selection.17:26.60,

Bio: Lowe was runner-up in the CIF-State Division I Championship race for the second year in a row running 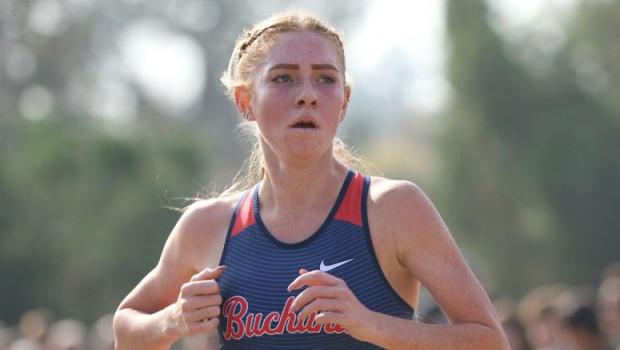 17:26.60, the No. 2 5K time at the meet and in the class. She ran second to teammate Corie Smith at the Central Section Finals, fourth at Clovis, fifth at Woodbridge and was the second CA senior and third overall from the Golden State to cross the line at NXN. Lowe finished second, third, first and second in four years competing in the Central Section Division I finals, and 26th, sixth, second and second in four years taking the line at the State Championships. Undecided on where she will attend college. MileSplitCA All-State Senior first team selection.

Bio: Shulze opened the season with a swift victory at Cool Breeze (her first XC win since crossing first in a 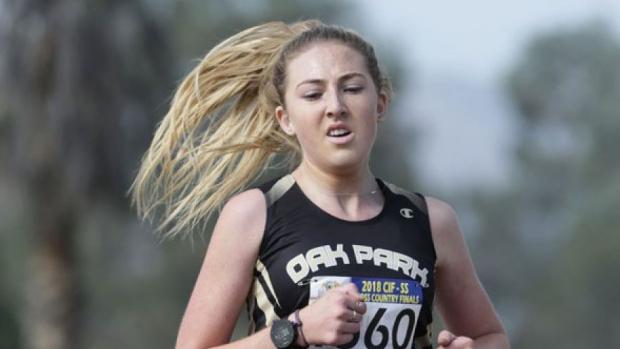 FR/SO race at Mt. SAC in 2015), followed that with her 3-mile PR (16:12.90) for fourth at Woodbridge, and went on to win four other 3-mile races headlined by her dominant victory on the Riverside Championship Course to win the CIF-Southern Section Division III title. Shulze then ran her 5K PR (17:34.80) for second at the State Championships earning a trip to Portland to run at NXN. Shulze's 2018 resume also includes five race wins and a fifth at Clovis. She took the line at the State Championships for the fourth year in a row with stunning drops the last three years. As a sophomore, she was 105th running 19:56.90. As a junior, fifth in 18:19.30 and as a senior, a 45-second drop to the fifth fastest time on the course at the meet! MileSplitCA All-State Senior first team selection. Headed to Wisconsin.

Bio: Except for the State Finals, where she was sick and unable to try to defend her Division I title, Smith 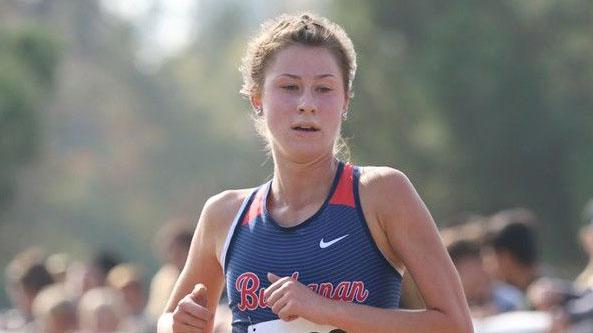 was nails. She was second at Woodbridge (16:11.1), third at Clovis (17:19.1 for 5K), and won her second Central Section Division I title in three years with a 20-second improvement at 17:15.1. Bouncing back from State, Smith received an at-large bid for a return trip to run at Nike Cross Nationals where she placed 53rd. Overall, she won four races, had two second-place finishes and the third at Clovis. One of her seconds was to teammate Meagen Lowe at TRAC by .01. Her time from Woodbridge ranks as the second-fastest 3-mile time in the state this season and her 5K time from the CS Final is the fourth fastest. MileSplitCA All-State Junior first team selection.