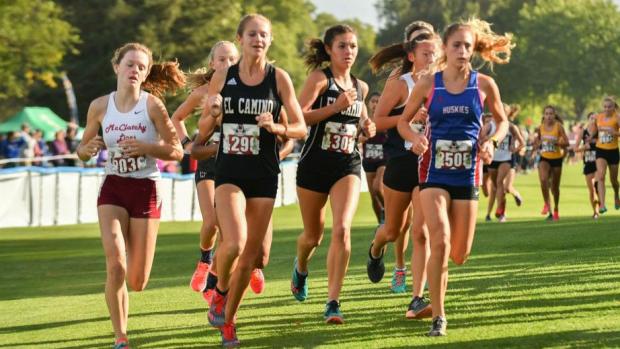 Story and photo by Daniel Tyree

SACRAMENTO -- This year's edition of the Capital Cross Challenge provided runners with outstanding weather, a challenging golf course circuit and competition for youth runners up to elite college harriers. The meet is run like clockwork and is rapidly becoming a favorite of Northern California teams and schools from as far away as Southern Oregon, Reno, Nevada and Southern California coming to the Capital city for the challenge.

The Seeded Boys race saw Southern California power West Torrance take the team title by a 110-130 score over an ever improving Placer High squad. The team race wasn't determined until the fifth runners finished and the tight 35 second West Torrance spread proved decisive. The Placer Hillmen were led by overall winner Jesus Guerra-Reyes who finished in 15:30, the fastest time of the day and just off of Matt Strangio's course record of 15:23 set last year. Following Guerra-Reyes were seniors Edward Buckley of Campolindo, (15:36.7), Damian King of Bella Vista (15:36.8), and Trevor Asbury of Rocklin (15:36.9).

The Seeded Girls race saw super sophomores Madison Kackley of and Mary Deeik from Vintage battle down the half mile straight away to the finish with Kackley pulling ahead for the win in 18:13 and Deeik close behind in 18:17. The bigger story might be the growing emergence of the St. Francis team who are again led by junior Isabella Fauria who has returned this season after an almost 1 1/2-year layoff due to growth related injuries. The Troubadors ran a controlled race with all runners packed together for the first two miles. In the end last year's section champion Vista del Lago couldn't match the 36-second spread of the St. Francis top 5 in finishing a strong second, 59-76.

The Unseeded Varsity races were just as competitive as the seeded with outstanding performances in both the boys and girls races. The fastest among the girls was Ponderosa freshman Natalie Wieland who scorched the course in an impressive 18:00, over a minute ahead of closing pack. The boys race came down to the last few yards as two-time State Meet qualifier (800 Meters) Nixon McKenzie of Armijo used his half-mile speed to finish in 16:12, out-kicking sophomore Jonathan Munoz of Arroyo Grande, who crossed in 16:13.

The Capital Cross Challenge continues to grow in numbers and maintain a well deserved reputation for being a well run meet on a challenging, fair cross country course. Runners love the course, coaches appreciate the efficient meet management and spectators were treated to an outstanding morning of racing in a beautiful setting.