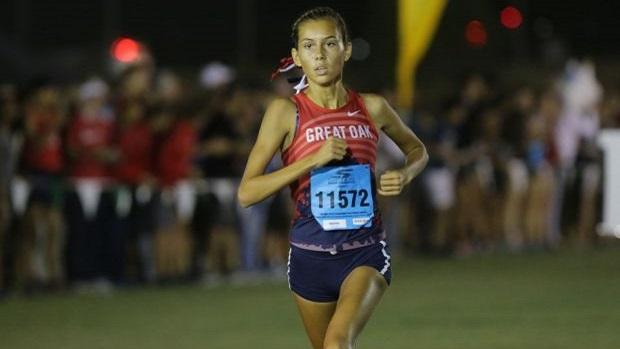 Cucerier ... the Roman word translation for Conquest!   Perhaps, we will begin referencing the Great Oak athletes as Legionaries rather than the Wolfpack after their dominating performance at the 2018 Woodbridge Cross Country Classic.  Already highly touted and expected to capture both Sweepstakes Races, their boys won handily behind a tight 25-second gap, 99-point victory over nationally ranked Newbury Park.  Meanwhile, fronted by Tori Gaitan's 16:06 victory, their girls ran away with a 61-point victory over nationally ranked Desert Hills of Utah.

Once the temperatures subsided, the wind died down, the lights kicked on to spotlight some of California's finest along with a strong contingent of athletes from outside the state.

Gaitan battled with the 2017 Woodbridge and State Division I champ, Corie Smith of Buchanan, all throughout.  Displaying incredible race savvy where the goal was simply to win, the Great Oak junior made a calculated move with 600 meters to go and never looked back.

Fellow junior, Arianna Griffiths crossed in 16:27 for an 8th place, while the lone scoring senior Fatima Cortes was 15th overall with a 16:47 clocking.  Audrey Dang's 16:58, 22nd-place finish was one of her best efforts yet, while sophomore Brianna Weidler filled that fifth spot and crossed at 17:49.

Granada made the trip down from Livermore and came away with a 3rd place finish in the Sweepstakes race, just behind Desert Hills.  Ending the evening with the second fastest team time of the invite, Colleen McCandless' 7th-place 16:24-pace performance led the Matadors.  Nationally ranked Granada was placed 3rd at the Division II State meet a year ago and is one of the favorites to earn an NXN berth this November.  Backing up McCandless, Grace Dupuis crossed in 17:15 with four others coming in under 17:46.

Leaving the evening with the third-best effort among Californian squads, Great Oak's Southwestern League foe, Vista Murrieta rolled to a dominating 98-point victory over Southlake Carroll from Texas.  Opting to move down into the rated race due to missing two of its top girls, freshman Devyn Candaele paced her Broncos with a 17:02 runner-up effort.  Bookended by her sister, Peyton, at 17:55, Vista Murrieta's 87:24 team time was the fourth fastest of the meet.

Also of note from the girls, Serrano freshman Tiani Goeson placed 10th in the Sweepstakes race in 16:36.00. That time eclipsed the previous fastest time by a freshman girl in meet history of 16:38, run by Ember Stratton (Sunset, OR) on the Great Park Course in 2015, and the fastest time by a freshman girl on the SilverLakes course, 16:40.8 by Makayla Browne (Riverside North) last fall.

On the topic of freshman girls, Sofia Abrego of Granada Hills won the Rated Girls race (17:01.30) with Devyn Candaele of Vista Murrieta right on her heels in 17:02.50.