DANVILLE -- Euan Houston has a bit of a brogue. Which is interesting because he moved to the Bay Area 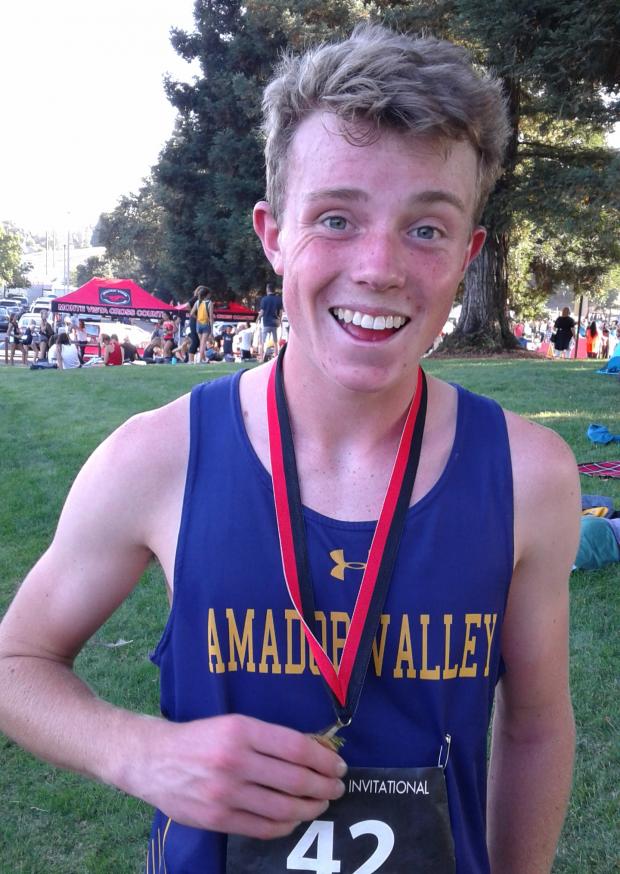 from his native Scotland when he was 2-years old.

"My dad, he's got very heavy accent," Houston said. "And on some words, it comes out. I also went back there over the summer for three weeks so that brings some of it out."

The Amador Valley High School sophomore has gotten serious about running. On Tuesday, he won the sophomore division race at the Monte Vista Invitational over the two-mile course at Oak Hill Park and around Monte Vista High School in Danville.

The mid-week afternoon event is one of the top opening invitationals in the area. Races were held for each grade - freshmen, sophomores, juniors and seniors. The weather was warm but good performances abounded.

Houston was able to outkick crosstown rival Prithu Kachare of Foothill Pleasanton to win in 11 minutes, 28.3 seconds. Kachare finished in 11:28.6.

Houston started playing rugby when he was 5 (they don't tackle at that age). Add in eight years of soccer, and he was a pretty typical kid of Scottish decent. But then he took up running.

"I was always decently fast but never anything special," Houston said. "In middle school, I was pretty fast but I wasn't winning anything.

"At the first meet, this -- the Monte Vista meet last year -- I came in the top 10 and I realized I was pretty decent."

By the end of the season, Houston was the No. 4 runner on the Dons, finishing 45th in the North Coast Section Division 2 race. All five scorers from that event are back this year. In fact, "we have the top 10 fastest runners that Amador has ever had," Houston said. "We're looking pretty good, pretty deep."

Amador Valley finished fourth in the team competition, coming up just short of a berth in the California Interscholastic Federation championships. The goal this year is to make it to state.

But mostly, he's just a high school kid having fun.

"It's really for the enjoyment," he said. "Sure, I could be fast, but am I ever going to compete in the Olympics running? Probably not. Maybe. This is just to help out my friend, to make friends, to have a great time in high school."

San Ramon Valley Danville's Kate Tavella won the girls senior race in 12:20.2 - more than 38 seconds ahead of the field.

"In my earlier high school years, I focused a lot more on, 'OK, at this point, I'm going to do exactly this and this and this,' " Kate Tavella said. "Especially for this course, I've been practicing here for years. We do workouts on these hills.

"I feel at this point in my high school career I do better when I take the pressure off. I've run here before, I know that I'm in shape. Just go run hard."