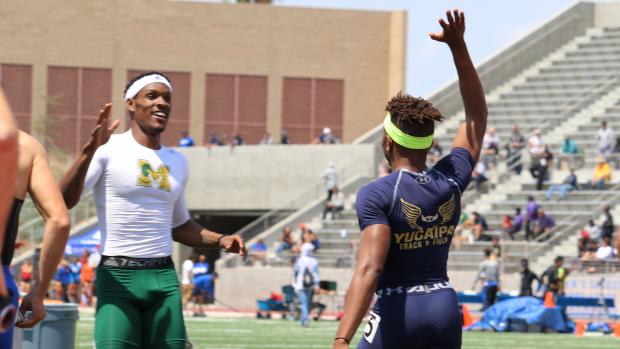 TORRANCE -- Where to start in recapping the CIF-Southern Section Masters Meet?

So many storylines, so little time -- which, in fact, is one of the storylines!

With so much going on at once on an ideal Saturday afternoon at El Camino College, it wasn't humanly possible to keep up with all of it. But we have full results, video interviews, highlights of selective events (CIF-SS Championship time restrictions, ya know), and plenty of photos to help tell the complete story.

As for what we know, let's start with what this was all about. The SS-Masters Meet is an all-star affair bringing together the best of the four division finals from the massive roughly 600-school section to determine qualifiers for next weekend's two-day State Track & Field Championships at Clovis Buchanan HS.

Great Oak and Murrieta Mesa, two teams from the Southwestern League in southwest Riverside County (Great Oak is only a couple miles north of the San Diego County line, fyi), did what it both needed to do to remain favorites to battle for the boys team title next week.

The Wolfpack had throwers Jaime Navarro and Harrison Gould advance in both the shot and the discus (they are two of only four from this meet who advanced in both), jumper CJ Stevenson move on after minimal attempts in both horizontal jumps, Carlos Carvajal advance in the 3200, Ernesto Collazo snag an at-large spot with a 14-9 clearance in the pole vault, and the 4x100 relay team, which includes Stevenson on third leg, post the No. 2 time in the state, 41.14, to win! 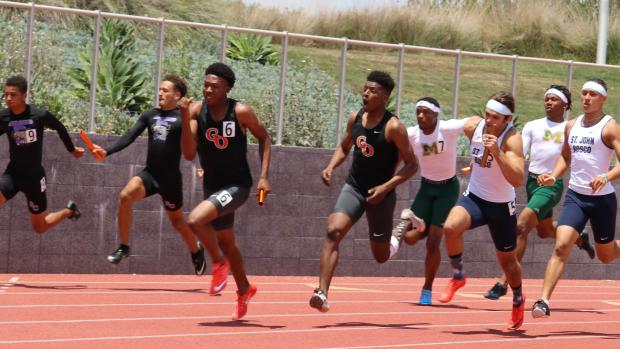 Now for Murrieta Mesa -- the third place team in the league meet behind GO and Vista Murrieta, BTW. The sprint-heavy Rams are fueled by senior Christian Shakir-Ricks, who ran second to state leader Asani Hampton (Yucaipa) in the 100m, beat Hampton in the 200m, anchored the qualifying 4x100 relay team, and came from yesterday in the anchor of the 4x4 relay to give the Rams hope for tomorrow in that event. For as much as it may seem like MM is a one-dude squad, think again. UC Davis-bound senior Matthew Okonkwo, did his thing on both relays, also qualified in the 200m, and won the 400 in 47.47, CA #5.