A division-by-division look at the boys competition at the CIF-Southern Section all-divisional championships on Saturday at El Camino College. 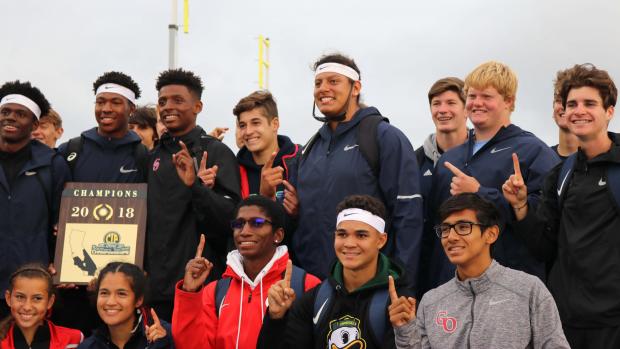 Great Oak captured its third title in the past four seasons and kept the Division 1 plaque in Riverside County for the 9th straight year (Jeffrey Parenti photo above).

In only the 2nd time ever, Great Oak captured both divisional championships in Track & Field AND Cross Country in the same year, with both genders.  The other team to do it?  Great Oak in 2016.

The Wolfpack handled their business in the field events as expected, racking up 30 points in the throws and 20 expected points in the jumps.  Those three individuals -- CJ Stevenson, Jaime Navarro and Harrison Gould -- alone would have won the title, but to open the meet, Great Oak kicked off the scoring with a 41.41 seasonal best victory in the 4x100 relay.   Anchor Grant Gaskins held off fast charging Rancho Verde and Long Beach Poly for the victory, after getting strong position from Joel Collins, Mikel Barkley and Stevenson, who crushed his third leg.

With their distance crew only earning nine points, the all-around depth for Great Oak coach Doug Soles (Jeffrey Parenti photo below) shined here as Stevenson erupted for a Riverside County triple jump record of 50-06.75, which places him atop the California state lists and now #3 in the United States.  Stevenson, looking to defend his State triple jump title in two weeks, also won the long jump (23-02). 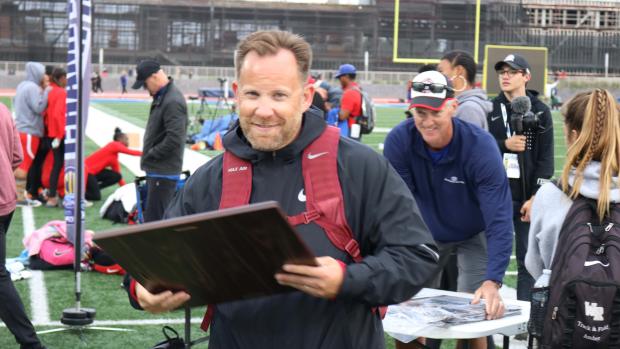 Moving up to take 2nd in the team competition were the men from Upland.  Junior Caleb Roberson captured the 100 hurdles in convincing fashion in 14.24 (into -0.4 wind) but only after some controversy regarding a false start in the race.  Roberson came back to take 3rd in the 100 meters.  In the 300 hurdles, creating a nice lead for himself going into the 5th hurdle, he was unable to maintain the pace and took 2nd.  Roberson earned 24 individual points, and also led the 4x400 relay squad to 5th (3:18.03) that advanced them on Masters. Anchoring that 4x400 squad and earning points in the 200 meters, sophomore Namir Hemphill also advanced with a 2nd place finish in the triple jump (45-07.75).

Breaking through with the second-fastest wind legal 100-meter time in California history two weeks ago, Yucaipa's Asani Hampton made it look easy in his 10.48 and 21.50 victories.  Having to qualify for the Masters Meet as an alternate in 2017 (where he placed 3rd), there was never a doubt that this was Hampton's victory from the gun. The 200 meters was run into a -0.4 wind while the temperatures that hovered in the high 60's all day weren't ideal for sprinters to post personal bests.  Hampton remains undefeated against California foes this season in both sprints. 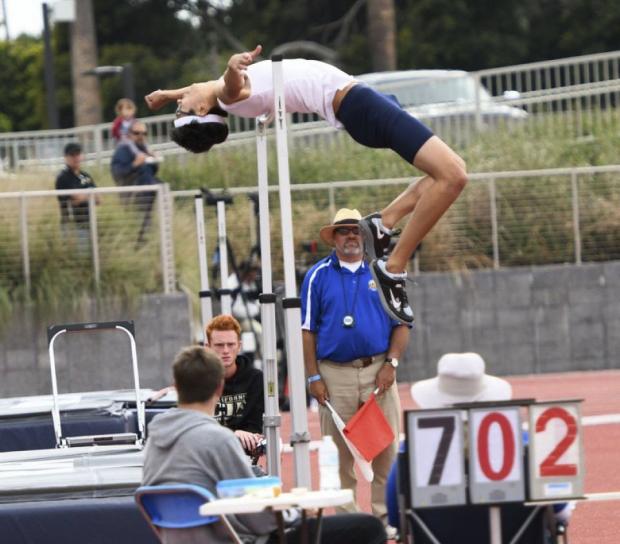 Trabuco Hills' Sean Lee stole the attention away from the track in claiming his FOURTH Division 1 title in the high jump.  In elevating over 7-02.50, Lee set a divisional record, previously held by Jeremy Fischer from 1994 at 7-02.25 (Lizette Adams photo above).  Attempts at 7-04.75, the state record, fell short but Lee will have two more weeks to not only go after that record but also to defend his state title from 2017.  This is the first time in Southern Section Division 1 history that an individual boy claimed four titles in the same event.

In an upset for the 4x400rRelay, Aliso Niguel's Michael Phillippy anchored his crew with a sub-47 second split to pass previous California #1, Long Beach Wilson, over the last 40 meters.  Their 3:14.71 now ranks #4 in Orange County history, while also breaking their school record from 2002. As Phillippy took 3rd place in the 400 meters, his 48.48 earned him a spot to next weekend.  In that 4x400 relay, six of the top seven times on the day were in the D1 finals with seven advancing to the Masters Meet.

Second place as a junior, Vista Murrieta's Parris Samaniego left the pack coming off the curve, heading home to a 47.60 victory (Jeffrey Parenti photo at the bottom of this section).  This was the top mark of the day as he looks to head back to improve upon his 5th place finish from last year's State Meet. Perhaps, the most improved hurdler in the section, ML King's Reyte Rash's steps were perfect over the last three hurdles as he raced home to a 37.65 victory in the 300 hurdles.  Rash was a surprise qualifier for the 110 hurdles, taking 2nd in his own league, but now moves onto the Masters Meet there after placing 3rd (14.75).  Keep in mind that Rash did not even qualify into the postseason as a sophomore in 2017 and now owns the fifth-fastest time in California for the longer hurdles. 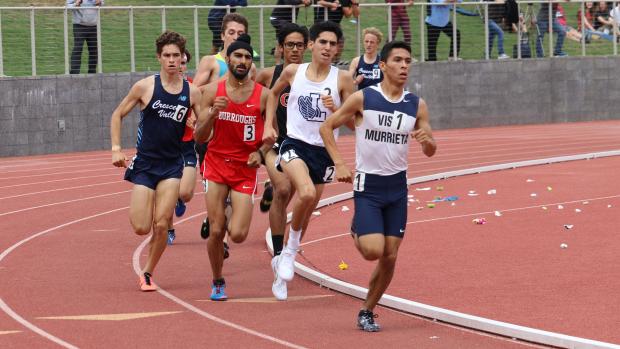 Coming into the 2018 season with a 4:22.68, Burroughs' senior Jagdeep Chahal was not on anybody's radar (Jeffrey Parenti photo above).  After his 4:15 performance earlier last month, he got everybody's attention and for good reason.  Maintaining his form down the stretch, Chahal moved away from the pack in claiming a 4:12.73 title in the 1600 meters . With his patented kick on the outside, Vista Murrieta's Edgard Villa took 2nd with a  4:14.30, just ahead of Crescenta Valley's Colin Fitzgerald (4:14.46) and Great Oak's Carvajal. 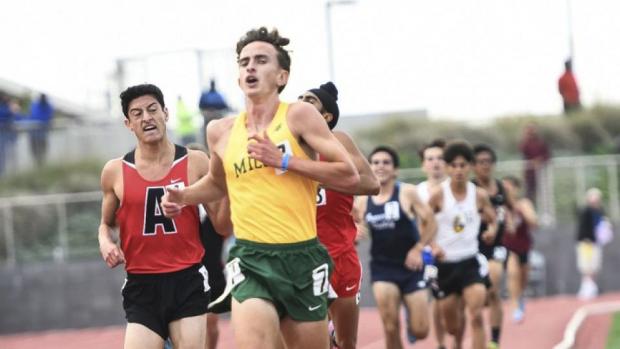 After the fastest preliminary in Southern Section history last week for the 3200 meters, Mira Costa's Xavier Court employed the same strategy he has this season with a lethal last 400 meter kick.  With Ayala's Zach Arias directly on his outside shoulder the last 100 meters, Court (Lizette Adams photo above) held on for the 9:04.49 title while Arias crossed the line at 9:05.22.   Burroughs' Chahal raced to a 9:00.06 on this track last month, and took 3rd place here with a 9:05.85.  Newbury Park sophomore Nico Young proved that last week was not a one week peak with his 9:07.65 while again, Centennial's Trevor Woodward unleashed his patented late race sprint, finishing with a 9:08.03.  Crescenta Valley's Artin Allahverdian (9:08.21), Dana Hills' Jack Landgraf (9:08.25) and Carvajal will conclude the eight entrants that advanced into the field of 12 for the Masters Meet.

Surprisingly, Division 1 only produced three Masters Meet qualifiers for the 800 meters.  In a war of attrition down the final 100 meters, Tesoro's Ryan Bush earned the victory in 1:54.37.  Loyola's Mason Ratkovich was on his outside in 1:54.51 while leading until the last 70 meters, Roosevelt's Jackson Taylor held on with a 1:54.65 for 3rd place.  Only Ratkovich improved upon his time from the previous weekend's prelims.

Long Beach Poly's Kejuan Markham (10.71) took 2nd place in the 100 meters while Carlton Johnson of Rancho Verde (10.77) and San Clemente's Jack Shippy (10.82) also advanced onto next weekend.  In the 200 meters, RV's Johnson moved on with his 2nd place finish in 21.85, while 3rd place medalist, Oxnard's Chase Wells nabbed that last spot at 22.06.  Johnson, along with Roberson, is the only boy to qualify for the SS Masters Meet in four events.

Five altogether moved on in the 400 meters.  Behind Samaniego, Centennial junior Gregory Lapit improved with a personal best 48.32, 2nd place effort.  While Phillippy was third with his 48.48, Wells was 4th at 48.57.  Taking that last spot was Valencia's Jacure Johnson (48.88). 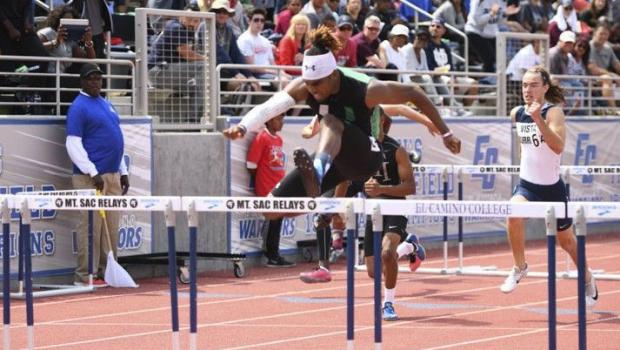 Behind Roberson in the 110 hurdles (Lizette Adams photo above), La Serna's Aaron Mahlow finished just ahead of Rash with a 14.64 personal best.  Earning that last spot to Masters, Vista Murrieta's Hunter Escorcia ran a 14.90 to be the youngest qualifier in either one of the hurdles.   Behind Rash and Roberson in the 300 hurdles, Millikan's Riley Williams took 3rd with a seasonal best, 38.00.  Also moving on was Tesoro's Michael Robbins (38.59), El Toro's Chris Kruki (38.69) and Trabuco Hills' Collin Hurd at 38.83.  Hurd's 37.70 personal best will have to be put on display out of lane one next weekend. 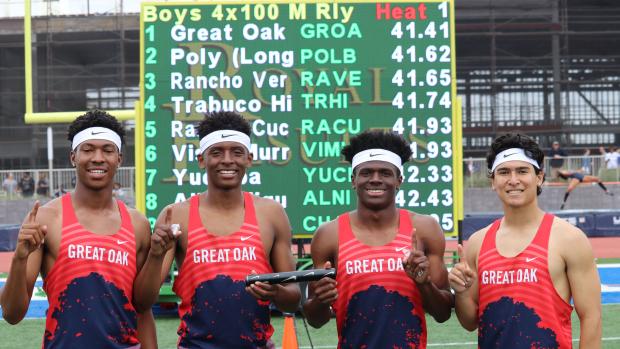 In an upset, Fontana's Aluesi Donal captured the discus.  His 179-04 was a 13-foot personal best as this was only the third time Donal had gone out beyond 160 feet! With Great Oak's Gould in 2nd place, Newbury Park's Gino Cruz took 3rd place with an effort of 177-01.  Glendora's Aaron May also advanced with his 174-03 effort. Behind Great Oak's front two, Santiago's Silas Hurst (58-0) advanced along with Newbury Park's Nick Krause (54-11).

Beaumont's Brady Ho was a surprise victor in the pole vault, having less misses than Roosevelt's Ethan Amata.  Both cleared 15-0 while four others cleared 14-06.

In the long jump, San Jacinto's Kevin Maria (22-09.5) and Los Osos' Almani Bishop (22-05.5) were the only two, besides Stevenson, to measure out beyond 22 feet for the division.  Temecula Valley's Christian Gbla took 3rd place in the triple jump and advanced based on his 45-04.25 effort. 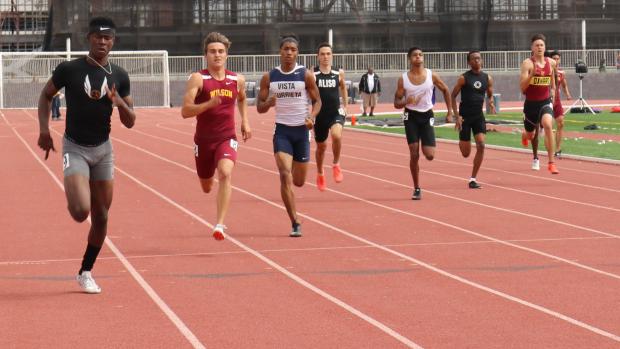