SAN JACINTO - The Flying Tiger Invitational on Saturday at San Jacinto High provided competitors with one of their first chances this season to perform in the heat.

Eighty-degree weather greeted the athletes at the venue and there were some spent runners at the end of many races, but everyone survived.

Beaumont freshman Jada Sidney, in fact, thrived, winning the 100 (12.89 seconds) and 200 meters (26.15) and running a leg on the second-place 400-meter relay team. The balance of the team was Kailyn Ruano, Katie Hershey and Alyssa Romero.

"I'm always hoping to PR (set a personal record) and I'm only a freshman, so I'm only going to get better," Sidney said. "We work super hard at Beaumont and push to get better."

Both of her sprints were PR's.

The 15-year-old said she also plays water polo and is a cheerleader and therefore performs "on Earth" (track), "in air" (cheerleading) and "in water" (water polo).

Down on Earth, Sidney is chasing records set by former Beaumont athlete Tylin Sands, she said.

The top five competitors in the boys 300-meter hurdles shrugged off the warm weather to register PR's, led by San Jacinto's Wayne Thomas who finished first in 40.90 seconds. Thomas also took a second in the 110-meter hurdles in 15.20 in a race won by Beaumont's Jalen Jefferson (14.87).

"That's the worst I've ever run," said Thomas of his 300-meter effort. "My form was terrible. But it's my first meet."

Thomas, a 6-foot-5 multi-sport athlete, said he was late to join the track and field team because he has been concentrating on football.

Elsinore's Kamari Maddox (Johny Murphy photo below) benefited from teammate Branson Kaiser pushing him in the boys 200. Maddox won in 22.03, Kaiser was third in 22.65 and San Jacinto's Martin Graise was second in 22.33; all were PR's.

"I felt pretty good," Maddox said. "Branson was pressuring me. Around 120 or 140 meters I exploded." 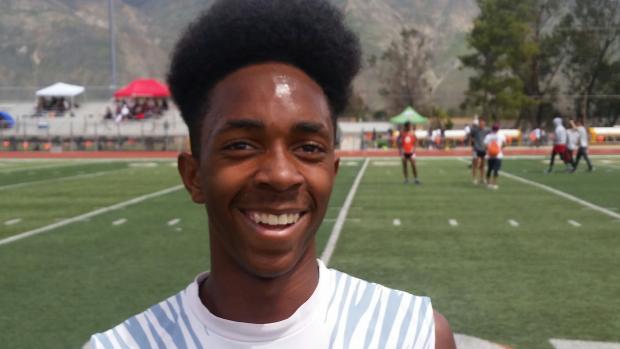 Coachella Valley's Isaac Ramirez only finished tied for eighth in the 100, but he won his heat and his time of 11.61 is a PR,  which isn't bad for a novice runner on a hot day.

"I had a problem on my start," Ramirez said. "Usually I push off my right foot, but I stepped with my left and had a little stutter, but I can fix it."

Ramirez, who also plays football and soccer, said he is mainly trying to improve his speed for his other sports.

Beaumont's Logan Hernandez shook off some discomfort in the balmy weather to win the 3,200 meters in 10:07.

"It felt good," Hernandez said. "On the third lap I started to cramp. I tried to breathe in through my nose and out through my mouth (to relieve it). I'm only a sophomore, so I can go faster."

Riverside Poly's LeRenzo Gipson finished second to Hernandez in the 3,200 in a school-record 10:22.03.

Other results of note: