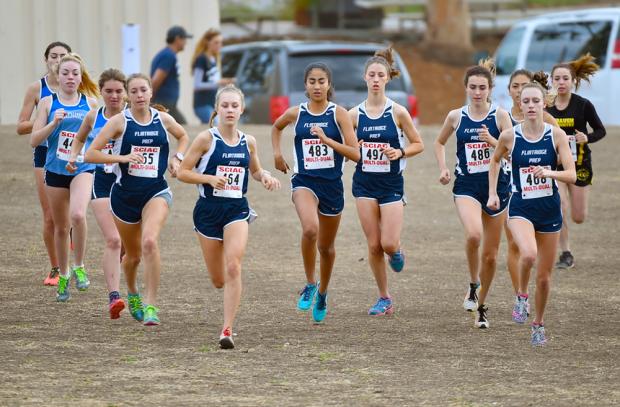 Division 5 Girls (Teams)
This year, the smallest division will lead off all the races at 8:30am. The Flintridge Prep girls (photo above courtesy of school website) have podiumed (top three finishes) for four straight seasons with most importantly, the last three state meet team titles. They finished in third place finish in 2013 before winning in 2014, 2015, and 2016. One more team title on Saturday would give them four in a row and would match them with San Francisco University's record of four in a row from 2009 to 2012. At this point, Flintridge Prep's 3 state titles in Division V ties them with Chadwick (1999, 2000 and 2008) and Mt. Shasta (2005, 2006 and 2007) for the second most team titles in this division. The overall state leader for most team titles is San Francisco University with their unprecedented ten team titles. The FP girls are the overwhelming favorites and should move ahead of the two other schools and stand alone as the 2nd best team in the history of this division. The chase for the two other podium finishes should include the two teams that tied for first place at the just completed North Coast Section Meet of Champions meet at Hayward HS. League rivals Lick-Wilmerding and San Francisco University battled throughout the season with UHS taking the league title but L-W reversing that result at the section meet as their 6th runner was just two places ahead of the UHS runner. 3rd place NCS finisher St. Joseph Notre Dame could be within striking distance as will SS 2nd place finisher, St. Margaret's. Last year's third place state meet finisher Nueva, repeated as CCS champions but will have a hard time competing here with the loss of one of their top runners.

Division 5 Girls (Individuals)
Defending champion, Kiera Marshall of St. Joseph Notre Dame, graduated last school year and is now competing for the University of Washington. Second place finisher, junior Alex Stout of Pacific Collegiate, has not raced this season. That leaves the favorite role to Marshall's teammate the last two seasons, junior Emily Perez, who finished in 4th place last year. She has been even stronger this season and may be as strong a favorite as the Flintridge Prep girls are in their pursuit of the team title. Her main opposition should come from several section champions and other leading contenders. San Diego Section champion Alaina Zamorano (Christian HS) defeated pre-meet favorite Lexi Watkins of La Jolla Country Day. Village Christian freshman Mia Barnett won the Southern Section meet finishing ahead of Flintridge Prep's #1 runner, Sophie Gitlin. Central Coast Section champion Castilleja's Tevah Gevelber has continued to record one of the most improved seasons in this division and will be a factor as well. Several NCS MOC runners including 2-time state champion Rylee Bowen of Sonoma Academy and University's senior Claire Jackson will more than keep Perez within striking distance in her pursuit of her first state individual title.