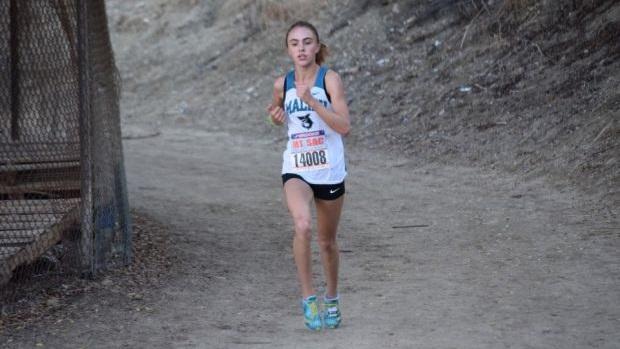 While the Saturday Sweepstakes races at the Mt. SAC XC Invitational are always amazing, don't sleep on the Friday action! Teams entered in Divisions 3, 4, and 5 will have sole possession of the spotlight, culminating in a set of Sweepstakes races in the evening that you definitely do not want to miss. History tells us that Friday will produce some of the best team and individual performances of the weekend, and we'll be on-site to bring you videos, photos, and interviews to go with the fastest results in the business.

The top story on day one of the world's biggest cross country meet: can Claudia Lane challenge the all-time meet record? Sarah Baxter clocked 16:00 in 2014, eclipsing the 2001 mark of 16:16 set by Ukiah's Amber Trotter. Lane broke Baxter's record on the Lake Casitas course in her debut this fall, dropping 45 seconds off her time from 2016 in the process. The Malibu star and defending national champion clocked 16:32 in her solo effort last year, which is currently sixth on the all-time list. Given such an auspicious start, it's not out of the question for her to be the first girl ever to break 16 minutes on one of the toughest courses in the country. And let's be honest here: it doesn't matter to Lane whether she has competition in the race or not, because she's on another level from everyone else in California right now anyway -- every effort is a solo effort for the junior superstar.

Another key item to watch on Friday: just how strong is this year's Cathedral Catholic boys team? Last year the Dons finished sixth in the Division 3 Sweeps race, with Joaquin Martinez de Pinillos losing to Rubidoux's Erik Gonzalez. Gonzalez graduated and Rubidoux is listed among the Saturday Sweeps teams, so this race may be Joaquin's to lose. Cathedral Catholic will be facing some very good teams Friday, including Palos Verdes, West Torrance, Brea Olinda, and La Costa Canyon. Of course, it's always interesting when NorCal teams come down for this meet, as they often race on tougher courses -- for this reason, keep an eye on Bella Vista in the D3 races, as they look to prove themselves in advance of the Sac Joaquin championship season. Speaking of LCC, the Maverick girls rolled to the win in the 2016 D3 Sweeps, and they're back to try to repeat in 2017; Palos Verdes and Rio Americano appear to be the primary challengers.

In the Division 4/5 Sweeps races, watch out for JSerra. Anthony Grover is coming off a big win in the OC Champs, but Mt. SAC is a completely different animal and the Lions will have to contend with a strong Flintridge Prep squad. Don't discount Sage Creek in the boys race, either, and Danny Rubin should be right in the thick of the individual battle. On the girls side, it could be a pair of Perez runners competing for second place behind Lane: Emily Perez and Teresa Perez are both tough competitors. So is Nadia Tabrizi, who would love nothing more than to lead JSerra past Flintridge Prep and Coronado for the team title.