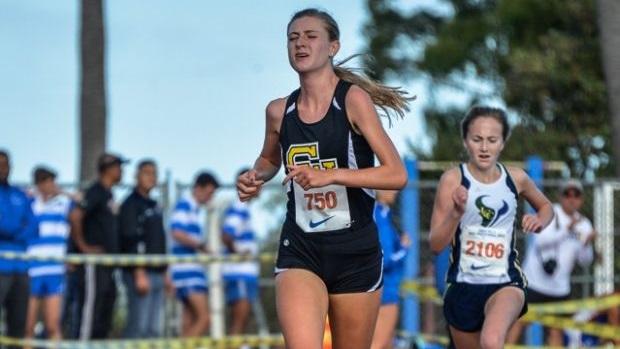 Two of the bigger subsets of the Southern Section hold their unofficial local championships Saturday, and you won't find more enjoyable or competitive meets anywhere! The Orange County Championships begin Friday with small school competition and continue Saturday morning, while the Inland Empire Challenge is a Saturday-only affair. Both of them take local rivalries and boost them to the max, both brimming with excitement, atmosphere, and talented runners.

The OC, of course, is absolutely loaded with top teams and individuals, and unlike many county meets (or similar unofficial championships) they usually bring their best effort for this event.

The latest edition of one of California's best individual rivalries is renewed in the Sweepstakes race Saturday, as Haley Herberg takes on Sara Leonard. Herberg has the edge this season so far, but not by enough to count Leonard out by any stretch of the imagination. Those two will likely separate from the rest of the field, but that just opens the door for an equally fierce battle for third involving Kelli Hines and Ashley Messineo (and maybe several other runners looking to post a breakthrough race).

The virtual meet pegs El Toro as the team to beat based largely on their impressive Woodbridge times, but it was Capistrano Valley that had the best race last weekend at the Clovis Invite. Can they sustain that effort two weeks in a row? Mission Viejo will also be in the mix, and don't be surprised if Canyon demonstrates enough improvement to factor into the race for the top 3 spots as well.

Despite his off-race last weekend, Jack Landgraf is the favorite here. He straight up rolled over the competition last year, and he looked even stronger this season until his setback at Woodward Park, so if he's healthy then you can count on him to erase that memory with a strong performance this weekend. Alexis Garcia was second last year and is capable of repeating that, but he will have his hands full with Anthony Grover and Adrian Vargas in the race.

If Dana Hills is at full strength, they are the class of this field by a large margin. El Toro is the only team that might have a chance to challenge them - and the gap from El Toro back to the 3rd-ranked team is even larger. Don't be surprised if the only meaningful team battle is the one for third place, which could feature at least three teams: Brea Olinda, Canyon, and Sunny Hills. And you also shouldn't be surprised if either Brea or Canyon emerges from that group and runs closer to the top 2 than their previous times would indicate; both teams are talented and we're waiting to see their full potential.