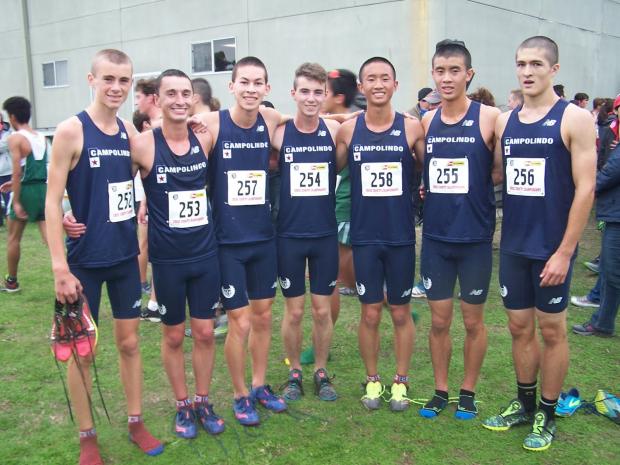 Last season was one of the more thrilling NCS championships in recent memory, with Campolindo (photo above courtesy of Albert Caruana) holding off a spirited challenge from Redwood to claim their 4th consecutive title. The Campo machine marched on the following week to land a podium spot at state and ended up as the top Northern California team. With the graduation of 5 varsity members, the Cougars have their work cut out for them this season as Maria Carrillo brings back a massive amount of depth that really excelled this track season while Redwood returns the best 1-2 punch in the section with Liam Anderson and Zach Martinez.

1. Maria Carrillo: The Pumas return the core of their 3rd place team from a year ago and will look to win their 6th section title and first since moving back into DIII last season. The track season Maria Carrillo put together was impressive, with 5 boys breaking the 4:40 barrier in the 1600 and 5 breaking 10:10 in the 3200. Senior Ben Lawson was the team's consistent frontrunner throughout, notching personal bests of 4:22 in the 1600 and 9:45 in the 3200. Scott Kruetzfeldt rebounded from an injury plagued fall to run 9:58 in the 3200 and should he remain healthy he will be a force to be reckoned with as his best time in the event is 9:38. The biggest surprise of the spring was the rapid ascent of freshmen Colton Swinth (4:34 1600) and Rory Smail (4:39, 10:09 1600/3200). If they can continue this improvement curve Maria Carrillo will be a daunting opponent for any team in the state, let alone the section. Throw in the ultra-talented Junior Will McCloud, who clocked an impressive 1:58 in the 800 and the Pumas have all the makings of a championship team. At this point in time they are the heavy favorites with a strong blend of talented front running and depth.

2. Redwood: The biggest revelation of last fall was the ascent of Liam Anderson from talented upstart to big time performer, coming on in impressive fashion to capture the section title in addition to a 2nd place finish at state and a top 25 finish at NXN. That trend continued during the track season as Anderson claimed the section title in the 1600 with a scorching 4:12, only to double back with a blistering 9:03 for 3200 meters in the same meet. He took it to another level the following week as he made the podium at the state meet in the 1600. He will undoubtedly continue to be a low stick for a talented Giants team that will look to improve upon their 2nd place finish from a year ago and win their first section title since 2000. Zach Martinez had a breakout spring, with his 4:17 1600 giving Redwood a deadly 1-2 punch that will keep their team score low in big races. Varsity regular Ryan Pole had a solid track season as well running 4:43 and 10:17 for the 1600/3200 and will look to improve upon his 18th place finish at the section meet from last year. While Matthew Phipps (4:43 1600) and Ollie Sagatsume (10:21 3200) both had good seasons, depth is a bit of concern as there is a big drop off after those two. For the Giants to reel in Maria Carrillo it will take a commitment to working on depth at the back end of the scoring positions. As it stands now Redwood will have the front-end power to contend with anyone but still lacks the depth at the 4-5 position to challenge for the championship.

3. Campolindo: The Cougars have put together an impressive 10 year run of dominance, winning 7 section titles in that timespan, including the previous 4. However, massive graduation losses leave Campo in a vulnerable position heading into the season and it will take a lot of work to catch up to the 2 teams ranked ahead of them. While the cupboard is not exactly bare, with Campo returning 5 at 10:25 or better for 3200 and 6 at 4:45 or better for 1600, they have the arduous task of replacing 5 varsity members from last year. Teddy Buckley had a solid spring campaign, with the junior-to-be running 9:47 in the 3200 and looks to be the frontrunner heading into the summer. Andrew Tseng is the next best returner, running 10:08 for 3200 but after that there is a bit of a drop off. Charlie Woidat (4:41/10:16 1600/3200) and Owen Hunger (4:40/10:23) both shined at the frosh-soph level this spring but it remains to be seen if they can handle the adjustment to high level varsity racing this fall. Same goes for seniors Timothy Sams (10:22 3200) and Jeremy Ahn (10:23 3200) who have put up respectable performances but will need to make a big jump to make an impact. The two wildcards for Campo are varsity returner Ethan Sauerberg who was injured during the spring, and DAL F/S champion Collin Lekki who did not run track. Considering their upside from last cross-country season, if either one of them could step up and fill in the scoring void for the Cougars that could be a boon to their title chances. For the time being, Campolindo is a few steps behind Redwood and Maria Carrillo and will need a huge step up performance from their young talent if they want to close the gap.

4. Tamalpais: The Red-Tailed Hawks could be one of the surprises of this division as they return a solid group that will look to secure a birth to state. Paul Law had an incredible freshman track season in running 4:34 for the 1600 and looks to be the frontrunner coming into the season. Jake Weisert also posted some solid performances during the spring, clocking 4:37 and 10:24 for the 1600 and 3200. Seniors Nick Wong (10:16 3200) and Ronan Cain (10:25) will look to back them up. If Tam can find a few more people to step up and keep progressing they will be in the mix to finish in the top 4 by season's end.

5. Las Lomas: The Knights return 5 members from last year's 5th place team and they possess the talent to move up these rankings and make it back to state. Preston Norris continued his improvement curve in finishing 4th at last year's NCS meet and followed that up with a great track season, with his 9:25 performance in the 3200 pointing at great potential for this upcoming fall. Parker Wilkerson was an MOC medalist in the 800 and while he has had more success in track than cross country, he has still flashed plenty of potential in previous years and should be a big factor. Charlie Kisylia and Preston Rodriguez both had solid track seasons but will need to make some big improvements if Las Lomas is to challenge any of the teams currently ranked ahead of them.

1. Liam Anderson (Redwood) -- Defending champion and fastest returner statewise in DIII
2. Zach Martinez (Redwood) -- Broke out during the spring running 4:17 for 1600 and should continue to improve this fall
3. Preston Norris (Las Lomas) -- 4th place finisher from a year ago and primed for another big jump
4. Ben Lawson (Maria Carrillo) -- Solid track times of 4:24 and 9:45 for 1600\3200 point to great potential
5. Teddy Buckley (Campolindo) -- Had a great finish to the season last year and also this spring, running 9:47 for 3200
6. Michael Wheeler (Northgate) -- Dropped his 3200 time down to 9:43 during track season to make him a contender here for a medal position
On the Bubble: Will/Jack Dunbar (Petaluma), Scott Kruetzfeldt, Colton Swinth, and Zach Lindemann (Maria Carrillo)