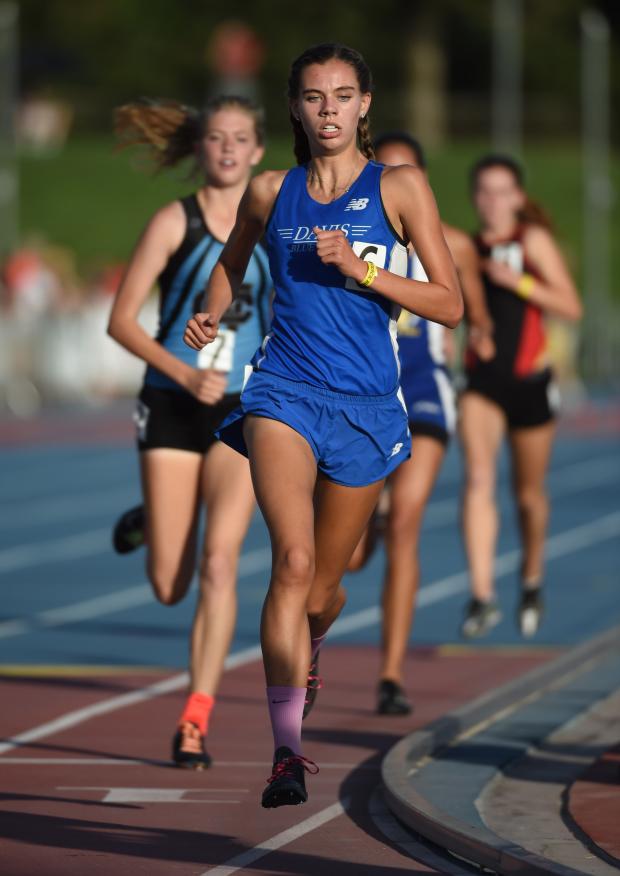 Today we chat with Davis junior Olivia O'Keeffe (photo above from 2016 CA state track meet courtesy of Kirby Lee). This past cross country season, O'Keeffe led her Davis team to a 2nd place finish at the CA state meet with her first individual title in the Division I race. It was not only her first state championship but her first individual cross country victory in her high school career. Following the state meet, O'Keeffe and her Davis teammates repeated their place from the 2015 season by placing in 2nd at NXN behind the Fayetteville Manlius juggernaut. Last spring, O'Keeffe made great strides by recording 2:12.09 and 4:48.66 personal records. The latter PR was accomplished at the CA state meet 1600 final where O'Keeffe finished in 3rd place.

What was your race plan heading into the state meet? As you went through the mile mark, what was your approximate place and when did you feel like you were moving up and approaching the leaders?
Headed into the state meet, I had planned on a slightly more conservative start (than the previous week at sections) with strong second and third miles to move up as best I could through the latter half of the race. At the mile mark, I came through a bit slower than I had hoped, around 5:35 I believe, in about 25th place. I made the majority of my progress during the second mile, moving into seventh place by the 2.1 mark.

At what point did you realize you were in the lead and when did it first sink in that you won a state individual championship?
Once I passed Lauren (Peurifoy) in the final 300 I think I knew that I was winning, but I really didn't believe it, so even as I crossed the line, I was unsure that I had really won. It definitely took a while for it all to sink in.

What were some of the highlights of your second NXN experience? How many of your teammates were making their 2nd trip? What did you learn from your race as a sophomore that you feel helped you this year?
NXN the second time was definitely just as fun as the first time around. Five of us were returning from last year, so we knew what we were in for a bit more than the first year. After my race last year, I knew that the mud made the course really challenging for me, so I was anticipating that again this year. I wasn't too happy with my race this year, but I came down with strep throat a couple of days before we left and I think that affected me more than I anticipated.

Your team finished 2nd at NXN for the 2nd year in a row. Did the school do anything to acknowledge both accomplishments?
Davis, as a whole, is incredibly supportive of the high school athletes, so we've always had a lot of coverage in the local newspaper. The City Council and School Board acknowledged us both years at one of their meetings as well.

Did you do anything different this past summer as you prepared for your junior xc season? What does a typical week look like for you with a saturday invitational? Any morning runs? Typical weekly mileage? Longest run distance?
This past summer I did more mileage than I did the summer leading up to my sophomore year. I increased my mileage from around 30 (sophomore year) to 35-40 this year, but I'd say the main difference that allowed me to succeed was the expectations I had for myself. After my sophomore track season, I got a taste of what I really could do, and that readjusted the level that I expected from myself leading up to this cross season. A typical race week would include a threshold workout on Monday, recovery Tuesday, Vo2 either in the hills or at the local greenbelt on Wednesday, recovery Thursday, pre-meet on Friday, then Saturday race. Sunday, in a race week, is either a day off, a shakeout, or a shorter long run of about 60 minutes if the race was not too intense. This season I only did two or three double days. I didn't want to bump above 40 miles this fall and had no trouble getting to around 37 without doubling up. The longest run I've done, I believe, was just over 13 miles, but a typical long run is around 10-11.

What was your first running experience? Did you ever feel any pressure following the success of your older sister Fiona?
Until eight grade, I played club soccer as my main sport so running was just a fun add-on. I began running in 5th grade for my school team. I raced a couple of miles, but at the time high jump and hurdles were my "specialties." I stopped running after my seventh grade track season and didn't seriously train until my sophomore cross country season. During my Freshman year, I joined both the cross and track teams but was hurt both seasons. For me, Fiona's success has never felt like pressure but rather a sort of inspiration. Knowing that she is my sister and was able to do these incredible things really encouraged me to keep trying and keep pushing with the thought that maybe I could be good someday rather than getting discouraged after a slow and injury-filled first year. 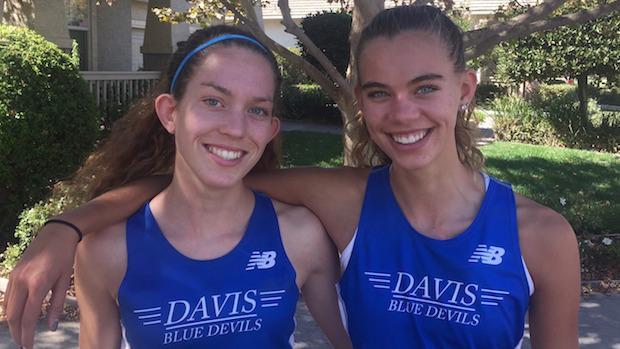 Looking back at your high school competitions, what race (could be xc or tf) do you feel was a breakthrough race for you?
Looking back, I feel that I've had a few breakout races. The first would probably be Stanford in cross country my sophomore year where I ran 18:00. That was a really big deal to me at the time and made my think that maybe I wasn't half bad at this. A time trial we did just after NXN of 2015 showed me what I might be able to do the same in track. We were trying to break 5 and I ran a 4:56, so that was really exciting. The SJS Masters last track season was a breakout race for me as well. I ran 4:50 that day. Going into the race that was my plan-- I had sort-of "decided" to run precisely that time and I think that showed me how powerful is the mental component of racing. Of course this cross season, States was my breakout race. I wasn't very happy with the rest of my season leading up to it but I felt that I had a performance like that in me. I was really calm going into that race with a concrete plan, and I think that mental component was again really a key factor. That race showed me that I can be successful in distances longer than the 1600 and I think sets the stage for me for cross next year.

You finished in 3rd place last year at the state meet 1600. What do you remember about that race?
The main thing I remember from the state 1600 was just being completely scared. My season goal was to make it to state, but the intimidation of stepping into that stadium for the first time is very real. I felt pretty fortunate with how the race played out-- the slower first two laps (2:30) helped me out against more experienced long distance girls, as I was able to use my speed to kick. I guess in that race I felt the same way when I crossed the line that I did this year in cross at states. It just felt so surreal to me that I finished 3rd but it was such an exciting race and definitely gave me a taste of my potential.

Tell us about your coach and how he has helped you develop to the runner you are today? What do you feel are the keys to your team's success during the XC and TF seasons?
Our coach (Bill Gregg) creates a really bonded, welcoming atmosphere on the team. I think the general vibe we have is really the key to our success. We all know when and how to put in the hard work that we need and have all 7 of us training together, pushing each other in each workout. We also focus on really recovering after each workout though and aren't too competitive with each other which I think is a perfect balance. Bill is always so supportive of us and our goals, never telling us something is beyond our capabilities. He helps us to really dream big, while keeping a level head.

Favorite XC invitational? Favorite XC course? Favorite XC workout? Favorite Davis XC tradition? Favorite long run? Favorite TF invitational? Favorite TF event? Favorite TF workout?
My favorite course would be Woodward Park with my favorite race being state. Woodward feels like such a good, honest course-- it's always a really exciting place to cap off the season. My favorite workout in both track and cross is vo2. We usually do 800 repeats, occasionally we'll do 1000s or 1200s, or add a 1600. I've always loved the faster shorter intervals, so track is especially fun for me when we start doing 400s and 200s as well. My favorite long run that we do is at camp before the season on the Pacific Crest Trail up by Donner Lake. It's quite hilly, especially the first 25 minutes, so it's always a challenge that early on but also so much fun. My favorite track meet is probably Arcadia-- there's such great energy every year and racing on a competitive relay team under the lights makes it even better. My favorite event in track is the 1600. I love the 800 too, but it feels a bit short for me sometimes. I have yet to run a 3200, but I think I'll do a couple this season. My favorite long run would probably be along the American River Bike Trail in Sacramento. It has soft and hilly side trials with a view of the river nearly the entire time. In the fall when all the leaves are changing colors and sunset run there just can't be beat.

What races are you most looking forward to this upcoming TF season? Any goals you want to share?
This year in track I'm most looking forward to Stanford, Arcadia, and state. In terms of goals, I'm hoping to run around 4:44 in the 1600 and would love to break 2:10 in the 800. I definitely have the thought of state champ in my head as well, being the top returner.