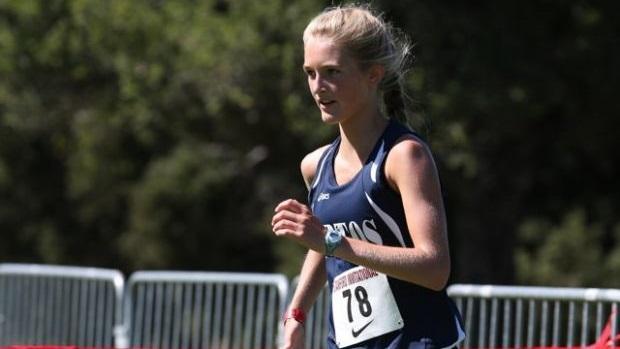 Aptos has achieved a lot of success under the tutelage of Coach Dan Gruber. Over the years, runners like Gary Passanisi, Brett Gotcher, Marissa Ferrante, Nikki Hiltz and Clare Peabody helped lead the Mariners to section and state success. Last year, Matti Peoples repeated as individual section champion helping lead her teammates to a dominating 20 point effort in winning the CCS Division III title. Throughout the season, the Aptos lead runner was sophomore Marea Zlatunich. She finished second at CCS behind Peoples but rebounded with a tremendous race at the state meet recording a 4th place finish and 17:47.3 finishing time. Paced by Zlatunich, Aptos recorded their 2nd state team title (their first was in 2005) as well as their 3rd podium finish. She will once again lead Aptos this year as her team will attempt to win their 6th straight CCS title.

1) What sports have you played aside from Cross Country and Track and Field?
I surf and ride horses but I have really never done any ball sports.

2) Who encouraged you to start running and how old were you?
When I was in eighth grade I decided to go out for cross-country. I wasn't really sure about it at first and wanted to quit after the first day but my dad wouldn't let me. I wasn't all that great my first year and wasn't planning on running in high school, but when I didn't show up for practice the first day freshman year, my friend Annika Niles convinced me to give it a try, so I did.

3) When did you first feel like running became enjoyable and that it's something you want to continue through high school and beyond?
I first really developed my love for running halfway through freshman year. When I was sure that I was going to make varsity and I really felt like I was part of the team. It was the team that drew me in, that feeling of camaraderie with six other girls really made me sure that this was what I wanted to do throughout high school and in college.

4) What were your freshmen highlights during XC and TF? What were you most proud of that you accomplished during your freshman year? Did you do anything differently over the summer before your sophomore season?
My best moment from freshman XC would have to be CCS; I knew Matti (Peoples) was fast, and getting second behind her was really exciting for me and helped me realize that I could actually be good at running. For track, the league final was my most memorable race, because breaking 5 minutes in the mile was supa cool. The most important thing I accomplished during my freshman year was just believing in myself and realizing that races are actually supposed to hurt and in order to get better I had to push myself. The summer between freshman and sophomore year I was definitely running more and I feel like that really helped my season.

5) Your team won the state team title in Division III last season. Can you tell us a little bit about the road to the state meet during the season and what was the reaction of the team when it was announced that Aptos was the team champion?
Last year, I feel like state was kind of in the back of our minds until it was right on top of us.  We tried not to stress about it too much, or put too much pressure on ourselves like we had the previous year. We knew what we had to do, and we went out and did it;  the girls and I raced our hearts out that day and I think that will always be my proudest moment as a runner and a team member. When we finished the race, we heard them announcing all the other teams except us, and everyone was freaking out.  We didn't know what we got, but the general thought was, not again, we couldn't have worked this hard just to let ourselves and Gruber down. It felt like an eternity before we got the official results, and when we did it was like an explosion, everyone was cheering, hugging, and crying. I knew that I was going to stand on the podium by myself, but it made it a million times better to know that I was going to stand up there with the girls that I'm proud to call my teammates and some of my best friends.

6) You ran 19:22.0 as a freshman on the Woodward Park course at the state meet and improved to 17:47.3 as a sophomore. What do you you learn from your freshman race and what do you attribute your improvement during last year's race?
My freshman year, I was so scared that I didn't even eat dinner the night before the race. I was overwhelmed and scared. This year I was prepared for all the people, noise, and pressure and I knew I just had to go out there and give it all I had, for myself and especially for my team. (and racing in the morning when it was cold didn't hurt either).

7) Can you tell us a little bit about the league that Aptos belongs to, some of it's past star runners and the running area near your school?
Our league is super competitive and it always has been, individual and team wise. There's some pretty intense rivalries between teams, but when we go to state and CCS and are in different divisions, we're always there cheering each other on. Lots of great runners have come out of our league including Nikki Hiltz, Anna Maxwell, Claire Peabody, Vanessa Fraser, and now Matti Peoples and Cate Ratliff. I hope to continue the tradition of excellence in our league and follow in their footsteps. My team pretty much always runs in Nisene Marks. We are so lucky to have such a nice place to run so close to our school.

8) Tell us a little about your coach Dan Gruber and how he has helped you develop as a runner.
Gruber is great. If I had ended up at any other high school and done XC, I wouldn't have been as fast. He saw my potential before I saw it myself and always knows when I'm not pushing myself enough. He always knows exactly what to say and is the reason I've had so much success with running.

9) Now that you are a junior on the team, do you feel like your role on the team has changed? As a young runner, who were the runners that you looked up to and why (could be Aptos runners or runners on other teams)?
Being a junior has definitely changed my role on the team. Now that Matti and Liv have graduated people look more to me and Annika McBride and its a bit weird, but cool too. I remember when I was a freshman and they were juniors and they were so awesome and just seemed to always know what they were doing, I really looked up to them and its crazy that people could ever look up to me that way.

11) What races are you most looking forward to this coming season? Any individual or team goals that you would like to share?
I'm really looking forward to Stanford this year. I just hope I can do my best to support my teammates and help us reach our goal to podium again so we can send off Annika McBride the right way.

12) Anything else you would like add.
Running is funning!

Thank you very much for your time Marea! AJC