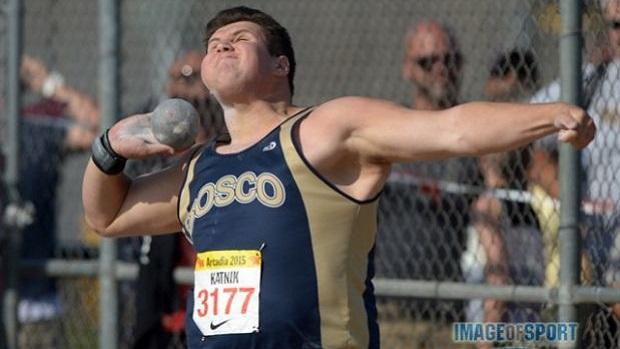 When you've had the chance to witness 4 sectionals in person, plus you've been swimming in the stats from all 10 for a few days, there are always a couple of impressions that really jump out at you. That's where I find myself today, and based on those impressions I've prepared 5 bold predictions for you. Along with each of these is a not-so-bold prediction, something that is entirely expected to happen that I believe will happen. Check out these predictions along with the rest of our pre-meet coverage, and we'll see how many of them end up coming true once all the dust settles on Saturday night!

There are four athletes in the field that already rank among the top 10 performers in US history in their events: Matt Katnik (#10 in the Shot Put), Elena Bruckner (#10 in both the Shot and the Discus), Jasmyne Graham (#5 in the 100 Hurdles), and Michael Norman (#9 in the 200 Dash). Norman is unlikely to improve on his mark, as it will be the 6th of his 7 races this weekend. Katnik and Bruckner only need a few inches to claim the next spot on the ladder in the shot put (although Bruckner hasn't thrown close to her top discus mark since catching the big throw). Courtney Corrin is in range of the all-time list in the long jump (she needs to exceed 21' 1.25" to break through, and Jurnee Woodward has a shot at the 40.81 that it takes to make the rankings in the 300 Hurdles. While we're on that race, you might factor Graham into the possible candidates - she has run she broke 42 in the Southern Section despite being well off from her perfect rhythm. Fiona O'Keeffe is within 5 seconds of making the combined 2 Mile/3200 list, and that was run solo - she will certainly have the competition this weekend to push her to new heights. Lauren Rain Williams ran a wind-aided 22.68 that would make her the #4 performer in US history if it were legal, but like Norman she will be on her 6th race when the 200 final rolls around (unlike Norman, she will not have run two individual 400's in that process, so she might be a tad bit fresher). Of course, the state meet is more about winning than it is about big marks, but those types of performances go hand-in-hand with intense competition.

NOT SO BOLD: Katnik and Bruckner will dominate the shot put.

Upsets and back-and-forth competitions are interesting, but sometimes it's glorious to watch one of the best of all times simply be better than everyone else. Katnik has been that all season, and Bruckner seems to be hitting her stride in the shot put just in time.

The easy candidates here are Fiona O'Keeffe in the 3200 and Destiny Collins in the 1600. O'Keeffe nearly broke 10 while winning by 51 seconds at her sectional, while Collins looked very strong as she posted a 4:40.34; Destiny is also close in the 3200, having run 10:11 last weekend. Amanda Gehrich ran 4:42 against Collins at Southern Section Masters, putting her in range of breaking the barrier. The next-best candidate could be Marissa Williams, who clocked 4:47.88 in a solo effort at the LA City Section finals, and whose season best of 10:25 came over a month ago (she has not been tested since). Also keep your eyes on Rylee Bowen, who pulled away from the North Coast section field for a 4:43.92 on Saturday, as well as Brighie Leach - the Campolindo senior declined to advance in the 1600, letting her put all her energy into the 3200.

I think we all get the sense that Destiny Collins can go faster than she has, but she will have 2 1600's under her belt before the 3200 even starts, while Fiona can concentrate all of her effort and preparation on one race. Those fresher legs could make all the difference if it comes down to a 2-girl duel over the final 2 laps.

With Isaac Cortes opting out of the 1600 to focus on the 800, there are 5 runners that have been 1:51.54 or faster this season, with the fastest entering the meet 1:51.39. That makes 5 bona fide contenders for the title, and in the 800 a field that competitive usually means some contact early in the race. These guys need a clean race to break 1:50, and they also probably need a sacrificial lamb willing to set an aggressive pace early. Neither of those are likely to happen, and so you can expect a more tactical race with a lot of jostling for position - and that means a winning time in the high 1:50's or low 1:51's. That's a familiar experience for Connor Morello and Isaac Trevino, who went right to the line at last year's state meet and also at their sectional. Thomas Heib has dropped over 2 seconds the last two weeks to put himself in contention, and if Arturo Sotomayor continues to improve after a late-season illness he will also be right in the mix.

As for the 3200, what more could fans of distance running hope for? Saugus' Brian Zabilski already showed he can go sub-8:50, but will he be able to pull away this weekend or will the field go with him? He has already beaten the primary challengers from the Southern Section - Caleb Webb, Robert Brandt - but watch out for Eduardo Herrera and Steven Sum. Both of them cruised through their sectionals, and both have run under 8:57 this season. If Tamagno had chosen to run the 3200, I would set this figure at 5, and there still could be that many or more, especially with the race being run in cooler temperatures Saturday night.

Austin Tamagno runs to win, and with Cortes and Brandt sitting out the 1600 he may not be pushed to his limit. That's OK, because he still has the Dream Mile to mount an assault on that hollowed barrier.

BOLD: Neither Vista Murrieta nor Oaks Christian will win both relays.

The Broncos may have tipped their hand at last week's Southern Section Masters meet, as they did not stack the 4x100 and lost to Chaminade. With Michael Norman running 400, 200, and 4x400 prelims Friday plus finals Saturday, it might simply be safer not to risk him on the short sprint. Expect them to avenge their sectional 4x400 loss to Long Beach Wilson, though, as everyone will have the green light in their last event of the season. For Oaks Christian, it's the opposite - they have a dominant 4x100 and should win that handily, but might be tired when the 4x400 rolls around. They have very stiff competition in that final relay, too, and their opponents (St. Mary's, may be fresher

NOT SO BOLD: Both Vista Murrieta and Oaks Christian WILL win team titles.

Vista Murrieta doesn't have to win the 4x100 (or the 4x400 for that matter) to cruise to the team title. Winning the state meet is about grinding out the points, and second-place finishes in both (or even a third) will not hurt them much. If everything goes perfect for Eleanor Roosevelt, including getting their 4x400 through to the finals, then the Mustangs might be able to pressure Oaks Christian and make the final event very interesting. How often does everything go perfectly for any team at the state meet, though? Expect the Lions to enter the 4x400 with a decent lead, allowing them to relax and simply run for a top-4 finish.

Field events in general can be unpredictable - you never know when a contender will foul their three attempts in the preliminaries, completely altering the course of the event. The horizontal jumps will be extremely competitive this weekend, as will the discus throw, and in many of those events there is no clear favorite; for example, you can't call it for Elena Bruckner in the girls' discus when she lost her sectional final to teammate Ronna Stone. Brooks can be considered a slight favorite in the boys' triple jump - he uncorked his 49' 9.75" PR at Central Section Masters, giving him an 8-inch advantage over his next-best competitor (and nobody else exceeded 49 feet during their sectional finals). Davis has a serious opponent in Kennedy Jones, who actually went farther last weekend, but the Agoura sophomore has been in the upper 40's 5 times this season, including a wind-aided 41-footer and a wind-legal 40' 11.5". Jones has only been in that range twice, and Davis' experience at the Texas Relays should really help her come through with the state title.

NOT SO BOLD: Chaos will reign in the vertical jumps.

The high jump and pole vault are often the least predictable of the field events, and this weekend's fields for the vertical jumps are so closely packed that there is no way to predict the outcome of any of the four. Adding even more complication is the possibility that some of the jumpers simply stopped once they had advanced to the state meet, meaning we don't know their full potential right now. This chaos is at its worst in the boys' high jump, where Isaiah Holmes cleared 6' 10" last weekend, followed by a whopping SEVEN guys that went 6' 9". On the season, Holmes is one of 3 guys that have cleared 7 feet, a group that includes Michael Burke and Darius Thomas (plus Darius Carbin at 6' 11"). In other words, there is no favorite. The girls' high jump is a little more differentiated, with Erin Beattie the only girl that has been over 5' 10" this season. Alexandria Florent has cleared 5' 9" and Skyler Daniel 5' 8", although none of the three hit those marks last weekend. They are followed by 5 girls with season bests of 5' 7", none of whom made that height in the sectionals. Did I mention the high jump can be unpredictable? In both the high jumps, there are at least 8 legitimate title contenders, and your guess is as good as mine when it comes to which athletes will end up on the podium.

The pole vaults do have favorites, but they are far from dominant. Kaitlyn Merritt has been about as consistent as a vaulter can be, clearing 13' 7" three times this season and going over 13 feet in her last 11 consecutive finals. She has Rachel Baxter breathing down her neck, though, having jumped 13' 3" this season, plus three other girls that have been over 13 feet. That means little margin for error for Merritt, who would love to just go over 14 feet and end all the suspense. Likewise, Austin Laut is the only guy in the state to have gone beyond 16 feet, although three of his competitors have hit that height exactly, and three more have been 15' 9". Even if the two vault favorites hold serve, the battle for second behind them will be wild.