In no particular order, here are the top storylines to follow at this Friday's Central Coast Section final. Also, check back in here following the meet for meet coverage including photos and interviews.

1) Central Coast Section 50th Anniversary Track and Field Final
This Friday's final will be the 50th anniversary of the first CCS track & field final which took place on May 28th, 1966 at Gunn High School. To commemorate this anniversary, several winners from that first CCS meet will be on hand to present the medals to the top athletes in each event. Aside from the running events measured in yards, there are notable changes since that first meet. Two events that are no longer part of the meet lineup are the 180 yard Low Hurdles and the 880 yard relay. Jim Marshall of Ravenswood won the 100 yard sprint and joined 3 teammates to win the 800 yard relay. John Radetich of San Carlos won the high jump with a 6'9 3/4" winning effort. Both Ravenswood and San Carlos high schools have since closed. Finally, Burlingame won the team championship that year with 17 points and it is believed that the team scoring was 6, 4, 3, 2 and 1 for the first five placers in each event. 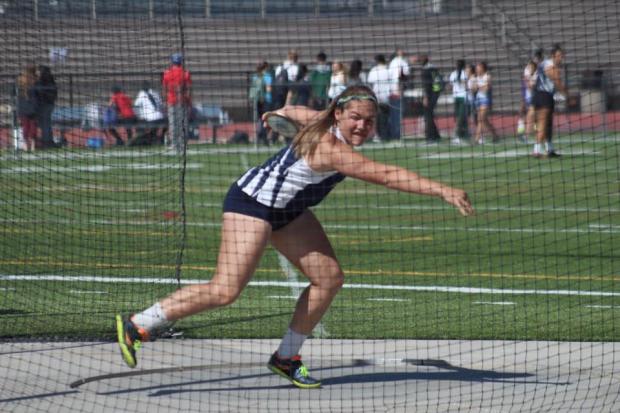 2) Elena Bruckner, Valley Christian San Jose thrower
It's already been a spectacular season for Valley Christian San Jose junior thrower Elena Bruckner as she has recorded best marks of 50'5.25" in the shot put (CCS Top 8) and 182'8" in the discus (WCAL final). Her shot put mark is currently ranked 3rd in the nation trailing only Sophia Riveria's 51'1.25" and KD Young's 50'10" efforts. It is also the 2nd best mark all-time for CCS throwers behind Julie Dufresne's 2005 winning effort at the CCS final (50'7.25"). Bruckner's winning discus throw at the WCAL finals is the top mark in the nation as well as the best toss ever for a CCS athlete (10th overall in US history). The former record holder, Darlene Tulua (Carmel HS) won the 1996 CCS meet with a 165'10" mark. Both CCS meet records could both fall on Friday before Bruckner heads to the state meet the following week. 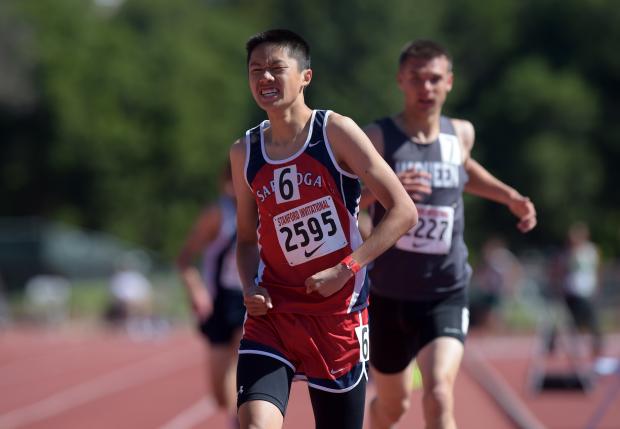 3) Steven Sum, Saratoga HS Distance Runner
If it seems like Steven Sum (above at Stanford Invite courtesy of imageofsport.com) has been running in CCS for longer than four years, you wouldn't be far from the truth (yes this is his 4th year). He has been one of the top distance runners in CCS since his freshman season when he finished in 5th place at the CCS final in the 3200 meters with a very solid 9:26.45. He improved his time as a sophomore by running 9:21.98 but dropped one spot with a 6th place finish. As a junior he improved both his time and place with a 9:20.91 effort and a 3rd place finish. This past fall, Sum finally won his first section title in Cross Country by winning the Division 3 race. He has really shined on the track with many victories including the 3200 at the Dublin Distance Fiesta (9:08.56), the mile at the Stanford Invitational (4:14.61) and the 800 at the CCS Top 8 Meet (1:55.50). His most impressive race did not involve a victory but Sum did run 8:56.86 at the Arcadia Invitational to finish in 13th place. He will now be attempting to win his first CCS track title and not only in the 3200 meters but the 1600 meters as well. He will be the favorite to win the 1600 meters although Carlmont's Johain Ounadjela does own the faster mile PR at 4:13.75 (Mt. SAC Relays). Sum will double back to the 3200 and aside from Ounadjela, he will also have to contend with defending champion Chris Foster as well as equally dangerous Jose Pina.

4) Girls High Jump
When it comes to the technique events like the hurdles and field events, it's very common for athletes to train with coaches who specialize in those events. The high jump competition for the girls this Friday will be an interesting one with 5 high jumpers who qualified to the final that all train with high jump coach, John Rembao. Julie Zweng (Scotts Valley), Cassie Ackemann (San Lorenzo Valley), Natalie Diaz (Soquel), Summer-Solstice Thomas (Santa Cruz) and Lexi Stevens (Scotts Valley) all made the 5'2" qualifying mark and are all within striking distance of the 5'5" at-large mark. Of those 6 jumpers, Zweng, Dufek and Diaz have participated in the state meet before. The other three finalists are also state meet contenders with Aine McNulty (Los Gatos), Olga Baryshnikova (Prospect) and Natalie Gutierrez (Christopher) all who have cleared 5'4" with Baryshnikova's 5'6" mark the top CCS mark along with Zweng. One final note on this event is that the bar will be raised by 2 inch increments at odd heights in order for the jumpers to have a better opportunity to make the at-large mark.

5) Boys and Girls team title contenders
The scoring to determine the team titles was changed in 2011 increasing the amount of placers that score from 6 to 8. That slight change will definitely be in play this year with the top two boys' teams in contention for the team title being Bellarmine and Mt. Pleasant. The Bells are no strangers to CCS titles with 5 track section titles in the 2000s. Mt. Pleasant's last boys title came in 1999 although the Mt. Pleasant girls have won plenty of titles in the meantime with 8 team championships in the past 15 years. The Bells will be favored to win this year with potential points in 11 different events. Mt. Pleasant does not have as many finalists but could still put a scare into Bellarmine with potential big points coming from the long and triple jumps.

The girls competition will be an interesting one with Los Gatos the slight favorite at this point. They finished in 2nd place last year to Gunn losing by a mere 3 points (73 to 70) in one of the best team competitions in CCS history. They have finalist in 9 events with the favorites in 3 separate events (400/1600 relays and Caice Lanovaz in 100 meter hurdles). Valley Christian SJ could give LG a scare as they will score major points in the two throwing events. The other contending teams that could post top 5 team finishes are Saint Francis, Branham, Gunn and Santa Catalina.

6) Defending Section Champions
Looking at the results from last year, 11 girls events were won by 5 girls. Madeline Price won the 400/200, Anna Maxwell the 1600/800, Elena Bruckner shot put/discus, Marisa Kwiatkowski long and triple jumps and Reonna Collier won the 100 as well as both hurdle races. All the girls except for Bruckner will not be competing this Friday but there are still enough defending champions looking to repeat as section champions. In the boys 100 meters, Eli Givens (above winning CCS Top 8 meet) won last year as a sophomore and will be favorite to repeat again this season as well as improve from last year's 3rd place finish in the 200 meters. Chris Foster won the 3200 meters last year and will focus on that race once again this year after dropping the 1600 meters heading into the finals. He will have his hands full with the already mentioned Steven Sum despite the latter's attempt for double victories in the two distance races. Kurt Felicitas will be looking to repeat as triple jump champion but will have to get by teammate Darius Carbin as well as two Serra jumpers, Jordan Kenison and Marcus Alvarez. 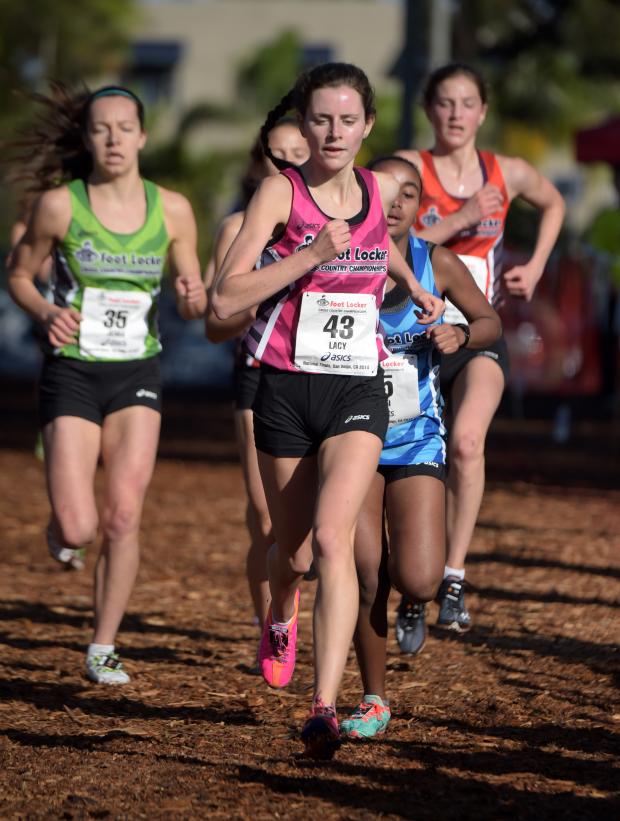 7) CA State "At Large" Standards
One thing for sure on Friday is that if you want to participate in the 2015 California State Championship meet, you will need to finish in the top 3 in your event. While there are at-large marks in play for each event, the truth of the matter is that if you surpass those marks, you are probably already in the top 3 if not winning. That said, there are a few events where the at-large marks will be in play. The already mentioned girls high jump competition has 5 jumpers that have jumped the at-large mark (5'5") or higher. Several other jumpers are within striking distance as well. The girls pole vault will also have several competitors in contention of the at-large mark which is 11'7". So far this season, the following vaulters have achieved that mark and higher: Erika Malaspina (13'2"), Nicole Trenchard (12'8"), Sydney Jacques (12'6"), Kathyn Mohr (12'0"), Melissa Braun (11'7") and Anastasia Kubicki (11'7"). Another event with a potential for athletes hitting the at-large marks past 3rd place will be the girls 3200 meters. At this point, Elizabeth Lacy (10:25.05-above courtesy of imageofsport.com), Caroline Gee (10:29.75), Cate Ratliff (10:32.14) and Niki Iyer (10:32.37) have all surpassed the 10:36.17 mark. Gillian Meeks (10:38.30) is also within striking distance and one thing for sure, this race will not be strategic in nature but fast from the gun.

8) Boys 800 Meters
Just two short years ago, Cody Johnson of San Lorenzo Valley ran 1:52.94 in the CCS finals and finished in 4th place. For this Friday's 800 meters final, the winner of this race would be ecstatic if he were to record that time. The favorite to win the race will be sophomore Ben Micallef of Bellarmine who has the fastest PR with his 1:53.90 at the Stanford Invitational. With the 800 field at 12, I wouldn't be surprised if all 12 runners roll into the final feeling like they have a legitimate chance to make the state meet. Daniel Cervantez of Lincoln made the state meet last year with his 3rd place finish and just posted his fastest time of the season in the semis. The other finalist from last year that also made the final this year is Ross Corey of Woodside Priory who also has the 2nd fastest PR in the field with his 1:54.51 at the Arcadia Invitational. The other heat winners from this past Saturday were Raul Barraza of North Salinas (1:55.37) and Draven Hawk of Scotts Valley (1:55.95). Two wild cards in the field will be Adam Scandlyn of Menlo Atherton who closes well and will be running his first 800 this year fresh and Garrett Mack of Sacred Heart Prep who was the last qualifier in this field but is another good finisher with a puncher's chance if within striking distance of a top 3 finish.

If you have other races and/or events that could be equally as exciting, feel free to add those events in the comments below.