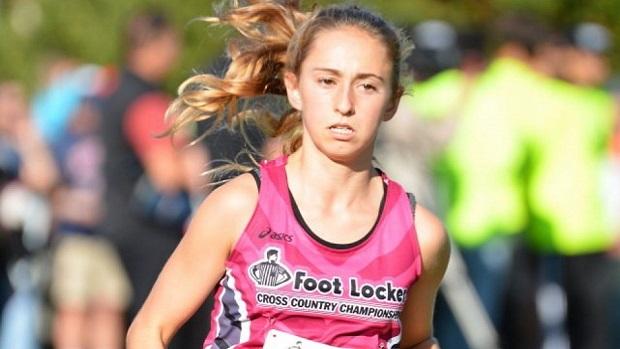 Foot Locker Finalist Kimberly Coscia may run roughshod over the Friday night 3200 field, but the favorites in most of the relays are far less clear.

Jada Hicks (Upland) might be a 9th-grader, but you won't catch her in the Frosh/Soph races this weekend. She has the fastest 100 Hurdles mark at 14.37 (she would also have the top 100 Dash time, but opted not to run that event). Juanita Webster (Redlands) should Hicks' best competition in the hurdles. Joseph Anderson (Upland) is the meet's best hurdler, having already run 14.46 this season. Los Osos hurdler Tomi Adegoke, if he runs well, will be close enough to threaten Anderson.

Lonsha Bradford (Elsinore) comes into the meet with the fastest 100 Dash time, although Azaria Hill (Golden Valley) should be right there with her when the final rolls around. With the Davis brothers opting out of the 100, Antonio Woodard (Upland) could be dominant - it would have been great to see those three square off individually!

Kimberly Coscia (South Torrance) is the top seed in the large-school 3200, and she could pull away from the rest of the field. Erin Holton (Rancho Cucamonga) ran 11:10 last year, although she hasn't put up a time so far this spring, and Avery Ward (Mira Costa) has run 11:32 this season. Maggie Baker (Bakersfield), who has run 11:36 and 5:15 in 2015, should also be a factor. Bennett Gagnon (Palos Verdes) will be running his first challenging 3200 of the season in the small-school race, though he has run 4:26 for the 1600. The same is true of Garrett Boulais (Burroughs) in the large-school 3200, where he will have to contend with Nick Lofgren (South Torrance) and Charlie Sherman (Loyola).

Friday features a number of unconventional relays, at least for California: the 4x200, the Distance Medley, and the Sprint Medley. These are always hard to predict, but usually really fun to watch; you never know which team is loading up with their best, and which is just giving some of their less-experienced athletes a chance to run (and you can't always trust the entries, as coaches often change tatics after the entry process closes). In the DMR, the 1200 and 1600 legs are crucial, so when someone like Loyola's Robert Brandt is on the anchor, it gives his team a decided advantage. Likewise for the 800 leg on the 1600 SMR, or the 400 leg on the 800 SMR.

It's a full day of field events on Saturday at Cerritos College, so make sure you get out there to witness the talent. Bryce Huggins (Bakersfield) is ranked 2nd in the state and 6th in the country in the long jump so far this spring. There are some 23-foot-quality jumpers in the field (like Lawrence White and Tomi Adegoke), but if Huggins goes over 24 again he will almost certainly win. Melanee Williams (Millikan) comes in with a 1-foot advantage over the next-best girl in the long jump, so the event is hers to win. Tia Cooke (Silverado) is the closest, but she may have to break 18 feet for the first time to get to Williams. Jacob Funes (Peninsula) is 3rd in the state right now in the triple jump, although Jonnie Young (Rancho Verde) and Adegoke should be within striking distance. A pair of 37-footers will square off in the girls' triple in seniors Christina Chenault (Carondelet) and Tia Cooke (Silverado), although Carson teammates Jelani Minix and Crystal Washington could be right in the mix as well.

Michael Pertusati (Los Osos) has thrown over 181 feet so far this season, putting him in the driver's seat for the discus win. It won't be a walkover, though, if teammate Tyler Merkley has anything to say about it - he has thrown 174'. If either of them falls off, or if Jordan Davis (Elsinore) has a good day, we could see some serious back-and-forth competition through the finals. The tables could be reversed in the shot put, though, where Merkley is the top seed over Pertusati. A third Los Osos thrower, Peter Caklovic, will try to make it a sweep for the Bears. On the girls' side it looks even more competitive, with Audrey Pillsbury (Peninsula) and Ashley Anumba (Los Osos) leading several throwers in the 110 - 120 foot range. Alladia Patterson (Louisville) is in the small-school throws, where her marks of 120' 2" and 39' 1" should dominate; it's too bad she won't get to go head-to-head with Nikaela Harris (Golden Valley), the only 40-footer in the field (at least, considering this year's marks only). Breanne Monroy (Millikan) also has a chance to break 40 feet this weekend.

The best duel of the day could be in the girls' high jump, where Alisha Edwards (Redlands) and Skyler Daniel (Upland) have both been over 5' 6" this season. With a good effort by Peninsula's Tammy McVickar, there could be a three-way contest for the win. Amanda Block (Beverly Hills) has the top mark in the pole vault at 11 feet, a 1-foot advantage in either the small-school division, where she is competing, or the large-school division, which appears to be completely wide open. Robert Ramirez (Alemany) has a season best of 6' 6" in the high jump, where he will have the chance to put up the best mark of the day overall. Freshaman Sean Lee (Trabuco Hills) will have something to say about that, as he has a season best of 6' 7". Luciano Lopez (Loyola) is the only male vaulter in the field that has been over 14 feet this spring, and he has actually cracked the 15-foot barrier; if he's on, he'll be hard to beat.

Alayha Byers (Alemany) has the best 200 time among the small-school entrants, and she will be trying to keep up with Bradford and Chenault from the large-schools division. Tunika Onnekikami should be the pacesetter overall, even though she is making her 200 debut - her 56.39 in the 400 already this season shows that she is in good shape. Having already posted the top 2 100 times in the state (albeit wind-aided), Dominic and Diab Davis will tackle the 200 Saturday. They will be in the small-schools race, so they won't get to face Woodard directly, but the competition for the top time should be fierce. Shante Robinson (Mira Costa) should run away with the girls 300 Hurdles title, as her 43.61 (CA #3 US #15) is 3 seconds faster than the nearest competitor. Behind her, there should be a great race between LaNaya Lyles (Silverado) and Jaylah Walker (LaSierra), and there are a few more athletes capable of getting into the top 3. Jonathan Harvey (DeLaSalle) and Manuel Gomez (Los Alamitos) have both been under 40 in the 300 Hurdles this spring, and that should set up a great showdown; Justin Alexander (Crenshaw) broke 40 last year, and if he is in shape he will be right in the thick of the final section.

After running very well in her debut cross country season for Los Alamitos, Katherine Izzo now turns her eye toward posting some track times. Who's to say she can't win the Invitational 1600, seeing as how she broke 18 minutes at Woodbridge in only her second race ever? Well, Coscia might have something to say about that; after all, the South Torrance star has a PR of 4:55. On the boys' side, with Brandt opting to focus on the relays, Lofgren will try to make it a South Torrance sweep. Crowley should be considered the favorite in the 800, with Amelia Pear (Valencia) and Jessica Gregson-Williams (Mira Costa) battling behind her (and Bianca Tinoco is an interesting entry there, having only run one non-cross country race, which was a :59 400). Javin Singer (Pacific) should pull away from the small school 800 competitors, and it will be interesting to see how his time compares to that of Xolan Brown (Redlands), who leads all entries with a 1:56 this season. Jahleel Norwood (Lakewood) ran 1:55 last year, so we'll find out what kind of shape he's in, and the same is true of Wilson's Copeland Laris.

In the 400 Dash, Chanel Rodgers (Alemany) will try to post a fast enough time in the small-school final to match Onnekikami and Willingham in the large-school race. Watch out for Mikaela Adolphus (Upland), whose lone meet this spring saw her in the 200 - she ran 56.01 last year. Isaiah Jewett (Cathedral) and Jamani Long (Gahr) will push each other in the small-school boys' 400, hoping to out-pace Anthony Reyes (Elsinore) and Justin Alexander (Crenshaw) from the large-school final section. On the other hand, if the Mar'Yea Harris that is entered for Wilson is the same Mar'Yea Harris that ran 47.1 for Poly last year, then the race might be over before it begins.

The cool of the morning is occupied with Frosh/Soph Distance Medleys and 4x1600 Relays, both of which are tough to predict. Mira Costa appears to have the deepest squad on the girls' side, while it's hard to bet against Loyola in the boys' race (especially with Palos Verdes not entered). When the 4x800 rolls around, the day will have heated up, and so will the competition: Redlands, with Claire Crowley powering their team, will take on Mira Costa, the owners of a 9:45 season best. It's the boys' 4x800 that is shaping up to be really special, though, with Wilson (8:01 coming in) taking on Loyola (8:06) and Paramount (8:11).

The girls' large-school 4x100 appears to be a wide-open affair, with Gahr and Crenshaw having the leading times so far this season at just under 50 seconds. Loyola's boys are the only squad in the large-schools division to have broken 43 this spring, with Wilson and Carson trailing in the low-43's coming into the meet. Then, after a long two days of individual and relay excitement, the meet closes with the 4x400 - and there could be several girls' teams that break 4 for the first time this season, if they can save enough energy. Upland has already run 4:00, with Carondelet at 4:03 and several teams in the 4:05 - 4:06 range (and that doesn't include Wilson, a team that ran 3:54 last spring). On the boys' side of the 4x400, the favorites are divided between the small-school race (Gahr, Cathedral), and the large-school race (Wilson, Upland, among others). It wouldn't be too far of a stretch to imagine one of these battles pushing the teams involved toward the 3:20 mark.