At NXN, on a new course in Portland, the Temecula girls (Great Oak HS) finished in 2nd place behind the juggernaut XC program of Fayetteville Manlius. That finish tied the highest place recorded at the NXN meet for any California team in the 11 year history of meet with Santa Clarita-Saugus (finished 2nd twice). It was a great way to end the season for a team that raced the best and never shied away from competition, even if it meant traveling out of state. Temecula was led once again by junior Destiny Collins (below left) who has had to deal with a foot issue the last part of the season and was definitely less than a 100%. She finished in 40th place overall but was the 8th scorer in the team competition. She was followed by sophomore Kiyena Beatty, junior Emily Clause, sophomore Sydney Belus and freshman Sandra Pflughoft. Counting 6th runner and junior Desiree Stinger, Temecula will return their top 6 runners next year and with a healthy Destiny Collins will be looking to move that one place higher and claim California's first national championship in the NXN era on the girls side. 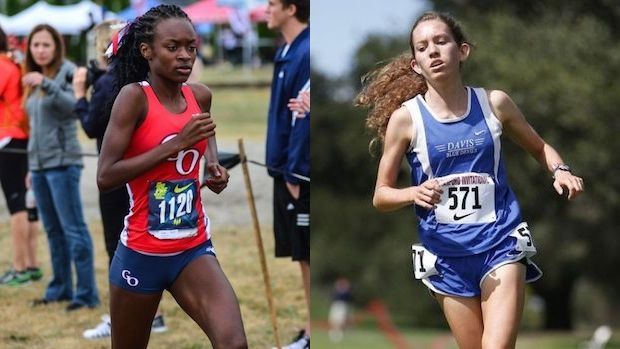 Individually, California was once again led by junior Fiona O'Keeffe (above right) of Davis HS in Sacramento. She equalled her place last year as she finished in 4th place once again trailing only Alaska's Allie Ostrander, Texas runner Paige Hofstad and Arizona's Danielle Jones. O'Keeffe, never afraid to lead, pressed the pace early and definitely made the three runners ahead of her earn their top 3 finish. She will be back next year with another year of experience and another opportunity to chase an individual victory at NXN. The next finisher for California was LA section senior Marissa Williams who finished in 13th place and also garnered All-American honors.

On the boys side, the fastest team at the California state meet was also the top CA finisher at NXN. Ventura led the way with a 7th place finish after dominating the state meet the week before. They were led by junior Garrett Reynolds who finished in 48th place and was the 21st finisher in the team competition. Also in the top 10 was the Fontana team (Jurupa Hills) that was led by senior Devon Reed who finished in 31st place and 13th place in the team competition.

On the boys side, 3 California boys stamped their tickets to San Diego led by senior Trevor Reinhart. He finished in 2nd place just a few seconds behind region winner, Elijah Armstrong of Idaho. Austin Tomagno, perhaps not over the sickness that ailed him at the state meet, finished in 6th place. The last CA qualifier was really the last qualifier as Oakland's Colin Burke nabbed 10th place and was the last runner to also dip under the 16 minute mark.