SILVERADO - The modified 3-mile course at Oak Canyon Pak in the northeastern foothills of Orange County included a 10-foot BMX-style hill athletes were challenged to climb some 2.5-miles into this weekend's Orange County Championships.

The two-day event directed by Mission Viejo coach Robert Belo and El Toro coach Ken Chai and timed by Finished Results, brought together 61-schools in the county, including 10 teams ranked among the state's top-10 by division.

Two of those, the boys from San Clemente and girls from Anaheim Canyon were the big team winners in Saturday's Varsity Sweepstakes races, while a senior -- Jai Dawson of Dana Hills -- and a freshman -- Holly Barker of Laguna Hills -- were the fastest individuals over the dusty, winding and challenging layout.

Junior Jack Stevens was fourth (15:18.4) to lead Capistrano Valley, which placed second with 93 points. Aliso Niguel was third with 94 points.

Barker, who tempoed the course on Friday when the rest of her team was competing, certainly ran it like she knew it, blazing the trek in 17:14.7 to win by nearly 34 seconds. Her victory was the first by a freshman in this event since 1995.

Barker said she was not aware of the milestone before the race.

"I just went in knowing that the competition was going to be tough, they were going to be more experienced than I am," she said. "My goal was to try to do as best as I could and not focus on the placement or the time as much."

Senior Emma Hadley was second in 17:48.1 in leading the team champions, senior Isabella Frisone was fourth (18:09.7), 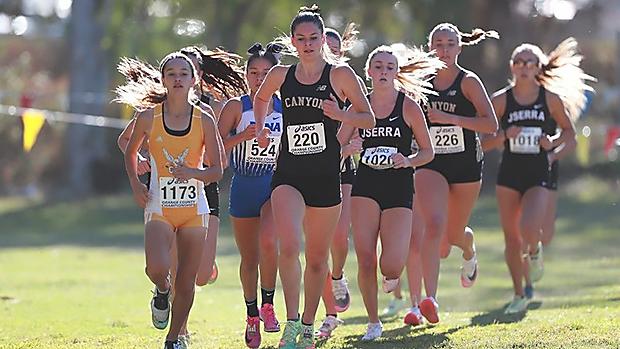 JSerra, the top-ranked team in Division IV, missed the team title by one point despite a 34-second scoring gap. The Lions were paraded in with sophomore Georgia Jeanneret placing fifth (18:12.6), junior Anastasia Snodgrass was sixth (18:18.1), senior Ashlee Gallegos was eighth (18:27.5), freshman Brynn Garcia was ninth (18:31.3), and sophomore Brooke O'Brien (18:45.7).

Races were held Saturday in the first part of the day with the sweepstakes races in the morning. Friday's races, for small schools and athletes scheduled to take the PSAT on Saturday, were held in the afternoon and early evening.

Friday's top athletes were Kendra Painter, a senior at Brea Olinda, whose time in the varsity girls small school-division race of 18:27.5 ranked eighth in the two-day meet merge. Jordan Galindo, a senior at Savannah, ran the course just before Painter, crossed in 15:50.0 to win the varsity boys small school-division race. His time ranked 13th in the merge.