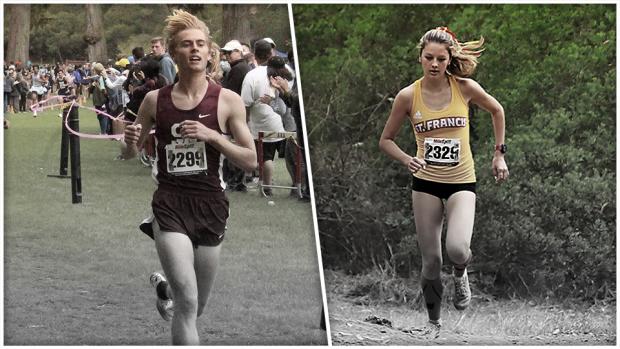 Jeremy Kain of Scotts Valley, and Cate Joaquin of Sacramento St. Francis were the fastest on the course at Saturday's 48th San Francisco Invitational hosted by Lowell High held at Golden Gate Park. (Photos by Damin Esper and Jeffrey Parenti)

It was the first real invitational for many of the competitors in two years, thanks to the COVID-19 pandemic. The runners were happy to be back on the trails and several had top-notch performances.

"Basically, the strategy was just get the rust off the legs," Kain said. "I haven't raced in a while. That was a lot of fun. I've never ran this course before so I kind of wanted to feel it out the first mile and see how I was feeling and kind of relearn to race.

"I could not be more excited to race a normal season because we haven't had that in a while for cross country. Just seeing everyone out here is really energizing and running past people cheering for you helps a lot."

Joaquin, a senior at Sacramento St. Francis (SJ), was coming back from a car accident she was in that cost her the spring season. She said she wasn't hurt badly but a stress fracture on her shin and whiplash forced her to give up training for a significant amount of time.

"This is my second meet this season," she said. "It felt really great to come out here. I wasn't really sure what to expect just because of the weird distance. I don't normally run 2.93 races. I just kind of went out there thinking try to hang with the front group and see how I was feeling and go from there.

"Right now, I don't think I'm in peak shape and to come out here and sort of take charge in the middle of the race and just finish off strong was a really big confidence booster for me."

Joaquin finished in 16:34.5, well in front of runner-up Ashlyn Boothby, a sophomore at Scotts Valley, who crossed in 16:43.9. Boothby was the early leader but a misreading of the course put her well behind. She played catch-up the rest of the race until the very end, picking up placing spots all the way through the chute to the finish.

Elizabeth Fetter, a junior at Palo Alto (CC), won the Varsity Girls Race 1 in a terrific time of 16:36.5 on the 2.93-mile course. That was the second-fastest time of the meet among girls. Freshman Hanne Thomsen of Santa Rosa Montgomery (NC) was next in 16:46.0. Lafayette Acalanes (NC) was the team winner with 75 points. San Francisco University HS (NS) was next with 103.

"It was good," Fetter said, saying she didn't run well in her first race of the season. "I was just trying to have fun and go out fast. Just go for it and not think too much about anything.

"You know, we didn't have a season last year because of COVID, so I'm going to try to do as well as I can, have fun and enjoy the meets because with COVID, we might not have the meets."

Damin Esper is a freelance writer and frequent contributor to MileSplitCA.

Jeffrey Parenti contributed to this report.