She is a mother of four, a highly accomplished educator as a physics instructor, a dedicated marathon runner, and this summer she took over one of the most recognized cross country programs in the country.

So, as Draughon balances a very full plate, one may assume sleep is the first victim in a limited 24-hour cycle.

"Sometimes I sleep less than a runner should sleep but I'm working on it," she said with a wry smile.

Draughon, 48, replaces a coaching tandem of Doug Soles and Dan Noble who produced 14 combined CIF-State championships, one national boys team title, 23 Southwestern League titles, 15 Southern Section Division 1 titles, and 22 combined appearances at the State Meet dating to 2004 for the girls and 2010 for the boys.

Oh, there's more but you get the idea.

Great Oak Wolfpack cross country -- emphasis on 'Pack' -- running near the front has been a standard in CA for more than a decade.

So, why would a physics instructor with no sports coaching experience, want to take on the challenge of replacing Soles and Noble and keeping Great Oak XC at the top?

"For me, the running was the easy part," Draughon said during a video interview (embedded above) at practice last week. "It was, how do I put all of the nuts and bolts of the program together? (Soles) helped with so much of that.

"I've always worked with large groups of teenagers in a leadership capacity. I'm a teacher. I work with them in that capacity. Coaching is teaching. So the fact that the classroom is the field instead of the classroom, really just changes the venue and it means that I get to teach something I love." As Great Oak prepares for the 2021 opener Friday night at the Cool Breeze Invitational in Pasadena, Draughon spoke of the legacy she's inheriting and the high standard deeply etched in the program.
"The pressure is huge but it's not terrible pressure. It's nice pressure. It's the kind of pressure you want," she said.

"You have an amazing program and you want to help the kids maintain that amazing program. You have wonderful men that you're following and we're friends. I'd like to be able to continue the legacy they've established and to help Great Oak continue to run fast and win."

Her first official practice with the 2021 team was a time trial this summer. But it's not like she was a mystery to runners on the team. To the contrary. Draughon said runners she has in her physics classes were well aware of her love of the sport and encouraged her to apply for the position. Tammy Draughon is originally from North Carolina. She went to South Rowan High in China Grove, where she said she was an average runner. She attended Duke University and received two degrees. She also has a degree from Arizona State. She lived for a short time near Seattle before settling in Temecula some 20 years ago. She began teaching physics at Great Oak in 2016, where she worked with the Science Olympiad and has received Temecula Unified School District Teacher of the Year recognition.

Along the way, Draughon continued her running and discovered her passion for the longer distances.

"I wasn't a phenomenal runner," she said. "I didn't find out I loved it the way I love it now until I was in college and started running longer distances. I discovered the longer I ran the better I was compared to the field."

In Temecula, Draughon said she discovered that there was "a great running community" in Riverside County's southern-most city, especially for budding marathon runners.

This fall, Draughon will run the Boston Marathon for the eighth time. That may not have happened if not for what occurred in her first marathon in St. George, Utah. It rained the entire time, she said.

But when she finished: "Wow! 'I can do that better!' I was so excited." 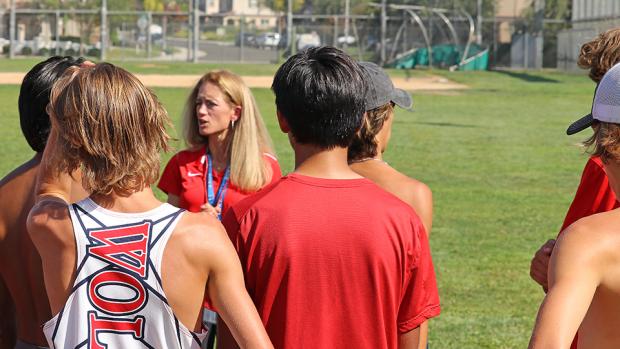 As noted above, Draughon said her first official in-person day with the Great Oak cross country team was a summer 2.75-mile time trial at nearby Butterfield Stage Park.

Junior Kelli Gaffney ran 17:13, best among the girls. Teli was next at 17:46. There wasn't a senior among the top eight varsity girls and only two in the top 16.

Senior Cameron Smith -- one of three sets of twins (there's also two sets of triplets) on the team -- was first among the boys, crossing in 14:26. Junior Mark Cortes was next in 14:41. There were only five seniors among the top 16 varsity boys.

Yeah, young depth is kind of a thing at Great Oak.

That was Draughon's first full interaction with the team and their's of her.

"I think from there they could see that I valued what they had already accomplished and they became more comfortable with the fact that I wasn't going to take away from anything that had already been accomplished and I was ready to help them take the next step to where they would have gone any way with Doug and Dan. "I feel that it was just a nice transition. The kids could see that I'm sincere and they could see that I was invested and I was 100 percent present. And to me, that's really all you need with teenagers."
Draughon said she's following the well-established training schedule used by Soles and Noble, but adjusting as needed.

"I'm using their blueprint in the sense that they were excellent coaches and the blueprint is great," she said. "I did quite a bit of research with how they trained the kids before I even threw my name in the hat. As a runner, I could recognize that they were doing really good things."

Smith -- whose twin brother Carson is also among the top returning boys on the team -- said the transition of coaches has been smooth.

"It's pretty similar to what Coach Soles used to do," Smith said. "She throws her own little things in there but all in all the workouts are similar, the intensity is similar, similar thought process behind what we do. Overall it's been great. It's been good. 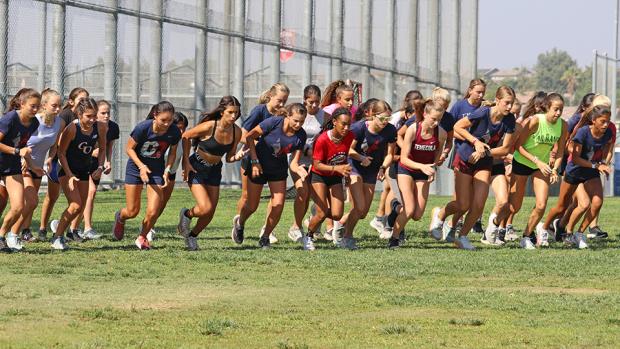 "There's a lot of good younger kids this year, which I'm excited for. We have no shortage of talent. There's a lot of fast kids this year. I'm excited to see how it plays out when we start racing."
As for sleep, Draughon said she trains first thing in the morning before heading off for classes at Great Oak. It wouldn't come as a shock if sleep also falls victim to the excitement in anticipation of what's the come once this team finally takes the line under Draughon for the first time.
"I already really love these kids and know that they're fast and that they're hard workers," she said. "They have what it takes to do what needs to be done to win.
"Quite frankly, they want it. They want to win. They want to achieve their goals. Having been off for a year because of COVID has made them want it even more. I don't know where we'll end up at the end of the season but the goals are clear and the work is there to get the goal accomplished."
Check out the full interview with Tammy Draughon embedded above.