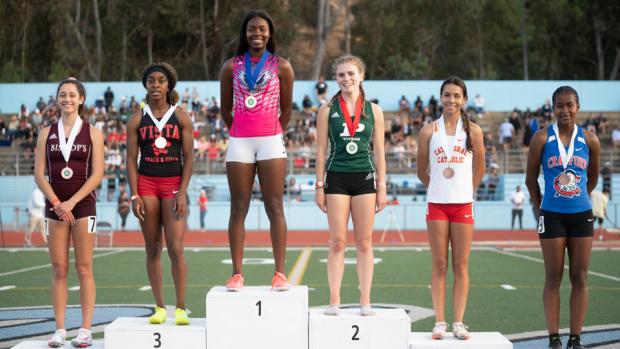 SAN DIEGO -- One of the great things about track and field is if one or two of the top athletes has an off-day, there are plenty of others to grab the spotlight.

In the San Diego Section Open Championships Saturday at University City High, Shaheed blazed to personal bests and section-leading marks by winning the girls 100 in 11.61 seconds with a legal 1.6 meter-per-second tailwind.

She then made it a sweep when she collected a second PR and 2021 section-fastest 24.14-seconds in the 200, using another friendly breeze of 1.7. That came after she anchored the Warhawks on the opening 4x100 to victory in 48.23.

The impressive performances more than made up for La Costa Canyon's Garrett Brown and San Pasqual's Elise Miller having letdowns after setting section records of 17-2 in the pole vault and 42-3.50 in the triple respectively last week.

They were still clearly better than anyone else, Brown clearing 16-2 before having trouble with his step at 16-8 and missing all three tries and Miller winning the triple jump at 38-2, more than a foot in front of second place.

Shaheed credited an explosive start in the 100 for a time that ranks equal to fifth all-time in the section. That equaled the best by two-time Olympic gold medalist Monique Henderson in 2000 while running for Morse.

"That was my best start-ever," said the future Cal Bear. "Finally. It feels amazing. It's even better that when I looked back, there was (her freshman sister) Amirah in second place.

"Her times are very close to mine as a freshman and I hope she breaks every one of my records before she's done.

"I just want to keep getting PRs (personal records) and hopefully I'll get a PR at Arcadia next week. PRs are always good."

She had hoped to dip under 24 in the 200 but by then the warm day had started turning cold as the fog swept in off the ocean.

That fog was one of Brown's problems despite having nothing but praise for the facility and the friendly wind which all vaulters relish.

"I wish we could have vaulted first," said the state leader. "It was warmer and the wind was good then, too. I was just out step at 16-8 and the first vault I was on the wrong pole.

"I'm very disappointed. I wanted to get 17-3 or 17-4. I just seemed to be more prepared last week (in the Division II championships at Mt. Carmel). The pole vault is such a tricky event-things can go wrong very quickly. I only had one decent try."

Miller doubled, winning the long jump at a windy 18-7.25, but like Brown, just didn't seem to get into a good groove for another record attempt.

Still, there was no shortage of quality performances even though a dozen or more of the better competitors opted to not participate in the meet that up to two weeks ago wasn't even on the schedule.

Chula Vista Eastlake junior Justin Cardoza, who jumped a personal best 6-5 a week ago, topped 6-8 and came close on one of his tries at 6-9.

"I expected to clear 6-5 today," said Cardoza, a junior who plays football and basketball. "I wasn't confident I could go 6-7 but when I cleared that, I got 6-8 on my second try."

Morse High senior Courvosiea Irby also came on at the end of the season, sweeping the shot put at 53-4 and the discus with a section seasonal-best 169-3. --Poway senior hurdler Maxwell Jefferson won the 110-highs in a wind-aided 14.33 (2.1 mps) before capturing the 300 hurdles in 38.68, losing almost all of a wide lead by chopping his step the final two barriers.