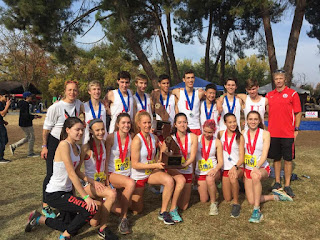 Today we chat with SF University coach, Carin Marrs (top left). Over the past few seasons, University has continued to be one of the top Division V teams in the state including multiple league and section championships. At the CA state meet, the University girls have continued to record podium finishes while the boys recorded their first boys' state championship in school history in 2017. Marrs followed legendary University coach Jim Tracy and has more than spectacularly filled some big coaching shoes.
1) What was your own running experience? How did you get your start into running? Highlights and proudest achievements during your competitive period? Did you play any other sports?
I started running in 8th grade after doing a lot of other sports before that time. I especially loved basketball and played in some pretty competitive leagues, but my freshman year I quit to focus on cross country and track. My proudest high school race was my senior year at the state XC meet when I won the individual state title and my team took first.  I went on to run in college and was lucky enough to be a part of a great program.  But it was a difficult transition for me and I had an average college career. Although I did have some great races during that time, they were pretty sporadic.
2) Who were the coaches that had the biggest impact on you and what did you learn from them?
I went to high school in central Virginia, where I was fortunate to be coached by the absolute best wife-husband team, Cherie and Chuck Witt. They were focused on making distance running fun- we played games every single week- but were also highly competitive. Our cross country team won state titles 3 of my 4 years, once with a score of 23 points! And while our team was nationally ranked for most of my high school career- a tribute to our incredibly tight pack- all of my teammates were incredibly humble people. In my coach's' words, each race was just "a tempo run with uniforms on" which took meant we could relax and just do what we did in practice every day- push each other hard without unnecessary stress. They taught me that I was a teammate first and that my individual race was important mainly because it was part of a bigger picture. One of my coaches was also my math teacher who taught me how to analyze race statistics and the importance of mental math for running. He could spout off 400 splits for a 5k or add up finishers for a team score in about 2 seconds. Probably the biggest thing I learned in high school XC was the importance of pushing during "bad" races- when you know you're not having a great day. If you throw in the towel on a "bad" day, 40 people might pass you. But can you keep fighting and only let 5 people pass you because your team needs those points? That kind of team-centered thinking was central to my high school coaches' philosophy. 9) What does a typical week look like for your runners? Any morning runs? Typical weekly mileage? Distance of longest run for your experienced runners? How often do they do strength work?
We usually do a tough strength workout and an easy run on Mondays. Tuesday are a hard/faster workout- sometimes a tempo run, intervals, hills. Wednesdays we do our long run- I stole this non-traditional day idea from Chris Williams at Dublin HS and it made all the difference this year. Thursday is a longer recovery day and Friday is usually a pre-meet easy run with strides. Saturday is either a meet or another hard workout- tempo/intervals/fartlek/hills. Sundays are always off. I firmly believe that high schoolers don't need to run 7 days a week and it makes the other 6 days higher quality. I think most serious runners can continue to improve in college if they are not run into the ground in high school. We usually do minutes-based long runs with 80 minutes being a standard for the top group. This can mean anywhere from 9 to 12 miles depending on how fast the group is going and where we are running. The Presidio has a ton of hills and we do incorporate those trails into most of our long runs. We do a focused, hour-long strength session on Mondays and strength and mobility work every day after running. The top guys were at about 50 mpw at the end of the summer and the girls were around 40. Their mileage varied during the season but it was never quite that high after August. The strength work and focus on quality were a big reason I think we had zero serious injuries this year.
10) Since your running days to now, what are the biggest changes that you have seen in cross country and track and field (positive and negative)?
I think that the internet and specifically social media and has impacted the sport in negative ways for sure. It's so easy to go down the rabbit hole of comparison when you see a competitor or even elite athlete posting a workout or a race time (and the cute accompanying photo that makes it seem like the workout/race was a breeze) and start feeling discouraged without really knowing anything about their circumstances. It was easier 20 years ago to focus on improving yourself rather than becoming consumed with what others say they are doing (it's very likely fake!). However, the internet has positively impacted the sport by bringing athletes, coaches and fans together to uplift each other on sites like yours.Another positive change is that I see a lot more strong, powerful, well-fueled high school girls than when I was in high school. There are still many young people suffering from disordered eating and it is still one of my biggest concerns in the high school distance running world. But I believe that now there are fewer coaches emphasizing "thin = fast" and more awareness around the long-term destructive nature of restrictive eating.
11) What would your advice be for a new coach taking over a team?
Take nothing for granted. Just because you have a great experience one season doesn't mean everything will stay the same next year so celebrate the highs in real time! On the flip side, it only takes a couple of athletes making positive changes to turn a mediocre team into a group of incredible athletes, even though "rebuilding" seasons can seem so disheartening.  Finally, believe in every athlete who is willing to work hard. I know that consistency and passion trump talent when it comes to improvement and when the stakes are high, you can rely on the gritty kids.
12) Anything else you would like to add.
Thank you, Albert, for all you've given to bring recognition and respect to a sport that doesn't get enough press!
Thank you very much for your time Carin! AJC
Tweets by MileSplitCA