Today we chat with former College Prep (NCS) runner Ethan Ashby (Photo courtesy of Mark Ashby). During the 2019 cross country season, Ashby was the 4th man on Pomona Pitzer's NCAA Division III National Champion team. It was the school's first national XC title in history. In fact, this was the first trophy that they had ever won at the national championship race. Ashby graduated from College Prep in 2017 and had PRs of 4:31.35 and 9:35.36 on the track and was a 4-time participant at the California state cross country meet. As a senior, Ashby led his College Prep teammates to a BCL East title over the Cooper Teare led St. Joseph Notre Dame team.

1) What sports did you do before high school? Any running experience?
I did a number of sports before HS. I started playing soccer and tennis as a kid, but I was never very good at either. But when my older brother went out for XC in HS, I decided to start running with him. I started running in 7th grade and haven't looked back.
2) When you started out in HS, who were the leaders on the team that you looked up to and set the culture for the College Prep team?
There were a lot of great leaders on our squad... guys like Tris Dodge and Alex Glavin come to mind because they provided the blueprint of how to be a serious, successful runner. I remember being added to a Facebook group the summer before my Freshman year called "Crew Love" (named after the Drake song), where all the Varsity guys introduced themselves and said that they wanted to make it to State that year. CPS hadn't made it to State in several years, and the guys were really motivated to change our fortunes that season. When we learned that we qualified at the NCS meet, I remember our captain at the time, Matt Romer, crying tears of joy. It sort of impressed on me and the younger guys the importance of what we just accomplished. I think that year was sort of a culture shift because our team ended up qualifying teams to state for the next 6 years! 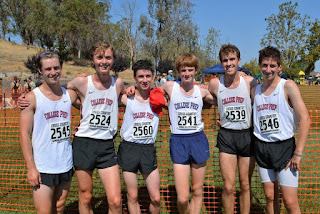 3) At what point in your high school career did you make the transition where running was important to you?
Running was pretty important to me from the get-go. I was a serious runner by the time I was in 8th grade, and when I visited CPS, I was impressed with the guys and the coach, Jack Coakley. So the team actually factored into my HS decision a little bit, to be honest.
4) What were some of your HS highlights and proudest achievements in both XC and TF?
The one that comes to mind is the BCL league championship meet my senior year in XC. St. Joe's had joined our league that year, and we had a back and forth rivalry going with them. I think I made binders for each guy on our Varsity squad, with pictures and times for the guy on St. Joe's that they needed to shadow and beat. It honestly felt we were planning a hit. Our plan ended up working out and we came out on top! We went bananas after that. My biggest T and F highlight was probably breaking 10:00 in the 3200m in my sophomore year. I dealt with bad iron-deficient anemia during my freshman year and considered leaving the sport. Coming back the next year and breaking 10:00 (I think by like 0.01 second) was really validating of all the hard times I went through the previous year. (Photo courtesy of College Prep) 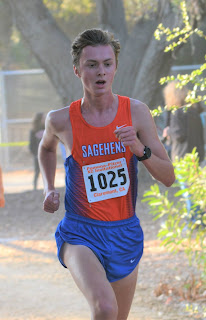 5) Who were your high school coaches and how did they motivate you and what did you learn from them?
I had a number of different coaches throughout high school. Jack Coakley was XC coach for most of my time at CPS, and he took a really patient and thoughtful approach to training us young athletes. I think that set me up for success at the collegiate level since I finished high school injury-free and ready to make strides in college. I'll also shout out Kiet Tran and Janice Prudhomme, who were our track coaches for a couple seasons: they were super knowledgeable about training and made me become a more detail-oriented athlete in my training. (Photo courtesy of Mark Ashby)
6) When do you feel like you made the decision to run in college? How did you go about selecting Pomona College? Where there other schools that you seriously looked at before choosing Pomona?
I think the fall of my senior year. I felt like I had more I wanted to accomplish, and I really wanted to see how far I could push myself. Pomona was really the perfect fit for me on a number of levels: they had a studly, fun team, excellent academics, and the SoCal environment just felt like a place where I could be myself and flourish. I wanted a small liberal arts experience, so I ended up mostly applying to places like Pomona, Carleton, and a bunch of the NESCAC schools. But Pomona was #1 in my heart from the outset. 7) How was the transition going from HS to college running? What was the hardest part of running in college as a freshman? Is there something you wish you could have done differently in HS that would have made that transition easier?
It was an adjustment because CPS was a low mileage program, and Pomona-Pitzer is a 7-days-a-week, higher mileage program. But I handled the mileage pretty well and was starting to see a big jump in my performance (especially in the spring, where I ran 15:04 in my first ever collegiate 5k). But I ended up incurring a femoral stress fracture halfway through my freshman track season from a combination of the steeplechase and not listening to my body. That halted my momentum during my freshman year, and it took me around a year to fully get back from that. So it had its ups and downs for sure. (Brian Sibanda photo above) 8) Last fall, your team won the Division III national championship. At what point in the season do you feel that the national championship became a possibility for you and your teammates? What were the reactions of your teammates and yourself when it was announced that your team had won?
We lost the best runner in program history that year to graduation, so it was supposed to be a "rebuilding year" for us. But a lot of guys made a big jump that summer and by the beginning of the season, we knew that a podium finish was a possibility for our squad. But we hoped for a fourth or third-place finish... but outside our forever-optimistic coach Kyle, we never dreamed of winning! At Nationals, I crossed the line, laid down on the ground with our guys, and all of us were like "damn that was a good race for me"! But we had no idea where we had finished. My teammate, Dante, and I left the finishing chute and Coach Kyle grabbed us, and he couldn't speak. In that moment, I remember feeling a wave of shock and incredulity: a "what the heck just happened" kind of feeling. Once we learned that we had won, we screamed ourselves hoarse, tackled each other, and basically celebrated the whole way back to the hotel and Claremont. My parents also flew out to the meet, so it was super special to share that moment with them too. It was honestly one of the highlights of my life! (Photo courtesy of Pomona-Pitzer)
9) From HS, favorite XC invitational? Favorite XC course? Favorite XC workout? Favorite TF invitational? Favorite TF event? Favorite TF workout? Favorite long run?
I always loved the Stanford Invitational in HS, because it was cool to be around such great collegiate competition. My favorite course was probably the State Course just because there's so much lore surrounding it. My favorite XC workout: I always loved our long repeat sessions at Dwight Derby dirt track in Berkeley. Sometimes we'd be treated to a nice Berkeley sunset at the end of our workout. My favorite track meet was NCS Class A my junior year because they played smooth jazz music and they had an Espresso machine. What a classy affair! My fave event in Track was the 3200 hands down. As Jack Coakley would say: "8 laps of pure pleasure". My favorite workout in track was probably some of the workouts we did at a Chabot College- especially longer repeats like 1000s or 1200s. My favorite long run spot in HS was Iron Horse Trail because it's just so darn flat.
10) From your own experience, what would you tell HS runners who are determined to compete at the Division I level but might have a better experience at Division II or III school?
I have loved my experience in D3: I've had a fantastic academic experience, made some of my best friends through the team, and accomplished some cool things athletically. I was definitely interested in the mystique of running D1 at some point in high school too, but I learned pretty quickly that "D1" is just a label. Obviously, the top-tier of D1 is a whole different ball game, and if you want to be a professional runner, going to one of those elite programs is your ticket. But at Pomona-Pitzer, we've gone to a lot of big meets and buried D1 teams, some of which I was once infatuated with running for back in high school. I'd remind high school athletes that D1 has no magic recipe for developing runners... in fact, I think D3 and D2 programs are generally going to take a more active interest in your development than a lot of D1 programs. So I'd encourage athletes to choose a school for the academics and the coach, rather than the label. Pomona's excellent academics and our coach, Jordan Carpenter, really fit the bill for me. 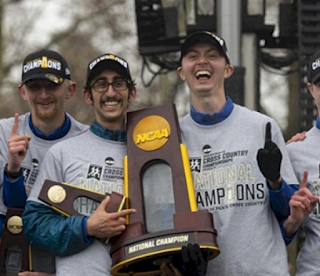 11) During this uncertain time, what has kept you motivated to continue to run?
Running is a great outlet to get outside and get the stress out. I think it's been great for my mental health, so it's almost become an important self-care ritual for me. (Photo courtesy of Mark Ashby)
12) Anything else you would like to add.
Hope everybody is staying safe right now! I'm going to be living and training in Park City, Utah this fall, so DM @loosebois on IG and we can link up for a run!
Thank you very much for your time, Ethan. AJC
Tweets by MileSplitCA