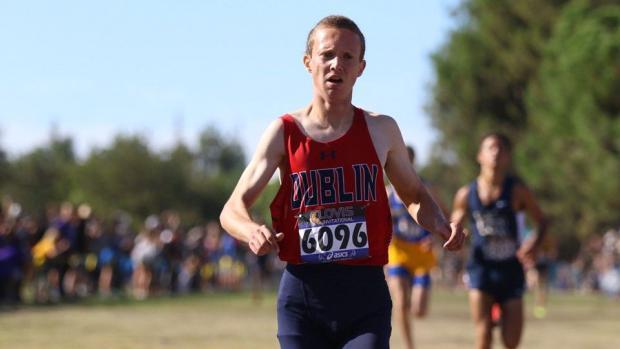 Northern Coast Section Recap
A smooth road to the section and state meets turned quite bumpy for North Coast Section athletes and coaches. The smoke from the Butte fires that drifted all over the northern part of the state derailed a lot of the league finals and stopped the rescheduled section final at Hayward HS midway.

As a result of the canceled section meet, a committee was convened to determine the team and individual qualifiers for the divisions that were not contested. Except for one glaring miss, the committee seemed to advance many worthy athletes and teams that did quite well at the state meet just four days later.

As you will see in the next few pages, the section continued to represent itself quite well and even had a few athletes who advanced to the Foot Locker national meet. Dublin senior Loic Scomparin (file photo above) won the section Division I title and advanced to NXN as one of the top 5 individuals in California.

Oh, by the way, another NCS athlete won his third section title in a row, won the Division III state title for the second year in a row and improved his 2017 3rd place finish at NXN to a winning effort this past season.

Needless to say, it was another banner season for one of the most successful sections in the state. In the next few pages, you will see our pick for runners and teams of the year as well as the fastest 100 5k and 3 mile times for boys and girls.