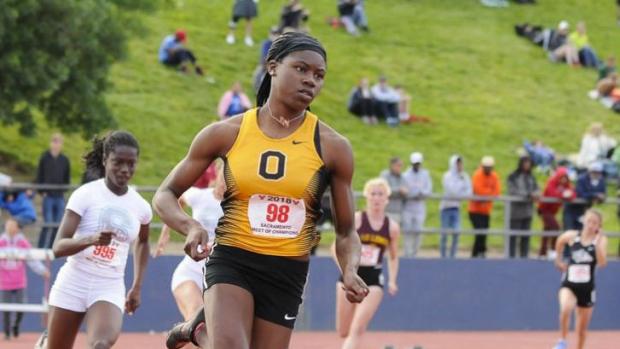 BERKELEY -- Tierra Robinson-Jones just keeps on burning up the track. Kali Hatcher is finishing up a terrific career herself. Liam Anderson has an impressive distance double in his pocket.

All qualified for next weekend's California Interscholastic Federation State Championships with big-time performances at the North Coast Section Meet of Champions on Friday and Saturday at Edwards Stadium at the University of California.

Robinson-Jones (pictured in a file photo above) showed she meant business early, laying down a fantastic second leg on Bishop O'Dowd's girls 400-meter relay. The Dragons won in 47.17 seconds, nearly a full second in front of second-place Pittsburg (48.14).

Then, in the 400, Robinson-Jones threw the hammer down. Challenged by Newark Memorial's Alexis Surrell on the final turn, Robinson-Jones responded, re-taking the lead and finishing in 52.69, a meet record and the best time in California and fourth-best in the United States.

When Robinson-Jones finished the event, she thought she ran 53.0 - still pretty good, but not the "real" 52 she wanted to run.

When she heard her official time, she dropped to the track and started crying.

"I'm still speechless," she said when she met with reporters. "I did what I came to do."

Robinson-Jones has been pushed by Surrell before.

"I heard Alexis coming up on me," Robinson-Jones said. "I was like, 'T., what are you doing, come on!' When she passed me, I said, 'OK, grab on to her.' When she started going, I was like, 'No, I got to go. Go with her before she gets too far away.' I basically used her momentum to push me forward. I didn't even look at the time, all I could think of was just finish and get to the line."

Robinson-Jones then came back to break another meet record in the 200, finishing in 23.56. The senior will conclude her career at the State Meet with an excellent chance to bring the Dragons a whole bunch of points.

Kali Hatcher hit a hurdle but recovered to set a personal-best of 43.88 while also defending her title in the event.

"I was trying to get my steps back on which slowed me up," Hatcher said. "Because I didn't want to stutter, so I had to elongate.

"No matter how bad you go over the hurdle, you have to push through." 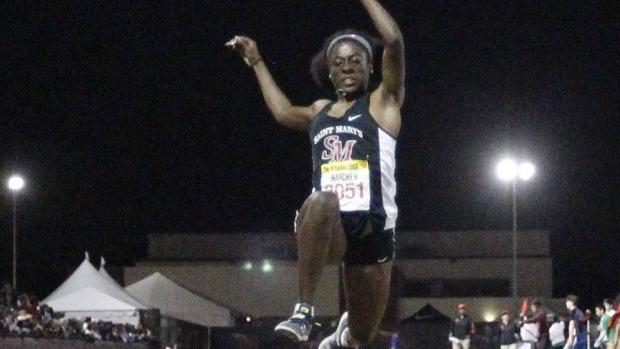 Kali Hatcher qualified for the State Meet in three individual events and a relay. (File photo)

Hatcher is the oldest of three daughters of two pretty good athletes - Michael Hatcher and Christine Gant Hatcher. Dad was a triple jumper at St. Mary's and mom ran at Presentation-San Jose. Kali Hatcher said her 10-year old sister will be the best runner of them all.

Kali Hatcher's performance was a key to St. Mary's winning the girls team championship with 56 points to Pittsburg's 41. The three sisters were posing with the banner and trophy after the meet. 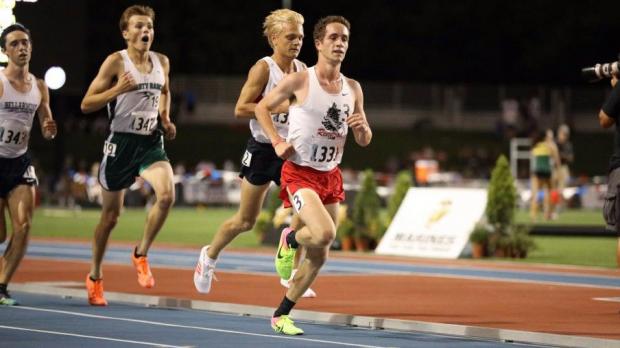 Redwood junior Liam Anderson expects to compete in both the 1600 and 3200 races at State. (File photo)

"I feel good," Anderson said. "I'm fit, I'm strong. I think I've shown more than once that I'm perfectly capable of going hard in the (1,600) and coming back and pressing it in the (3,200). Today's just a run through for next week, getting ready for next week, simulating the double, really the triple with (trials on) Friday."

Anderson played soccer and baseball as a kid and began running in middle school. Now, he focuses on running. His cousin, Evan Anderson, ran at Menlo-Atherton and Cal Poly.