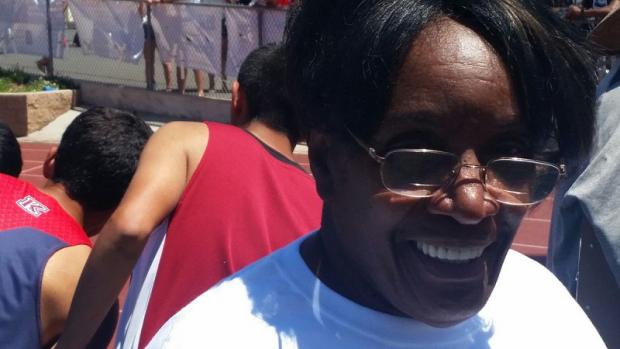 RIVERSIDE -- Blessed by warm weather and watched by luminaries, including 1964 Olympic hurdler Rosie Bonds (John Murphy photo above), the Raincross Tradition/Riverside City Championships went off without a hitch at Martin Luther King High.

The meet was the 10th revival of the city meet that began in 1970 and then was discontinued less than 15 years later, only to be revived in the new millennium.

Schools were separated into large and small school divisions.

This was only Benson's third meet as she also is a slap-hitting infielder on the King softball team.

"It's a good way to start," Benson said. "I play my softball games and go to practices and do track when I can. I'm pretty sure I can go farther."

Also nabbing a first from Poly was senior Kalea Ibarra, who finished in 2:16.96 to win the girls large school 800. She finished nearly 12 seconds faster than the nearest competitor. It was her fastest time since running 2:15.85 at the CIF-SS prelims last spring.

"I feel great," Ibarra said. "I've only run two 800s this season because I've been working on the 400. Next time I need to hydrate a little better; I didn't know it was going to be this hot."

Ibarra has a 4.1 grade point average and hopes to attend Cal next season. 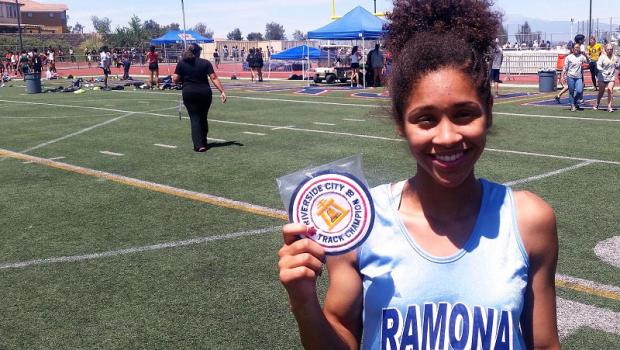 "I feel like I'm almost near my peak," said Davis-Arnold, who hopes to compete at UC-Riverside or Cal State University San Bernardino next year.

Turning in an impressive 800 in the boys large school division to cross first was Poly freshman Sam Medure who finished in 2:00.76. North's Mohammed Mohamed was second in 2:01.32 and Rubidoux's Kevin Ramos third in 2:01.53. 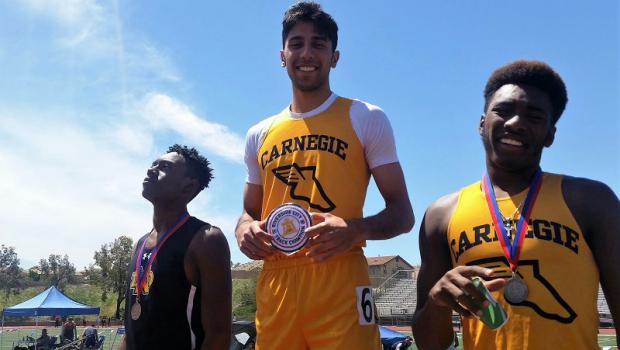 Carnegie School's Mumin Ozturk probably didn't imagine 3-4 years ago that he'd be competing for a Riverside City Championships, but there he was on top of the podium on Saturday after finishing first in the small-school 200 in 24.09. His teammate, Tyler Mosely, was second in 24.56.

Ozturk (John Murphy photo above) is a foreign-exchange student from Turkey.

Despite the thrill of winning a Riverside title, Ozturk said it was an off-track endeavor that has been his highlight in America.

Picking up a win for Poly in the boys large school 300 meters was junior Noah Griffiths in 41.30, just ahead of teammate Evan Vigress (41.33).

"My (personal record) was 43.03 so I'm pretty excited," Griffiths said. Due to injury problems, this is only Griffiths' second year of high school track and field.

Here are some other highlights from the meet: