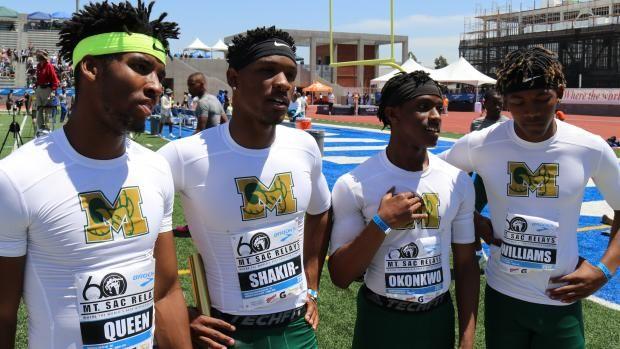 TORRANCE -- Maybe the 60th Mt. SAC Relays were a preview of the CIF-State Meet. Maybe not. Maybe only in parts. Take from it what you will but a couple of things jumped out amid the second day of high school competition at El Camino College.

Don't sleep on the fast boys from Murrieta Mesa. The Southwestern League has been the state's deepest league for the past handful of years fortified by powerhouse programs Temecula Great Oak and Vista Murrieta. But the Rams at Murrieta Mesa have been a clear third over recent years. This year, at least on the boys side, they appear to be closer to the juggernauts than the have-nots.

Powered by Cerritos Gahr transfer Christian Shakir-Ricks, the Rams put on a bit of a speed show on a pristine Saturday in the South Bay.

On a day filled with CA-ranking performances, the results from the boys sprint team at Murrieta Mesa was one of the eye-openers.

"This is the best and most versatile group we have had," Murrieta Mesa coach Aaron Ballou said. "The 4x400 stood out to me as being the most impressive. I knew we could run 4:16 and we can go even faster but to do it with some of the better teams that were scheduled to run dropping out made that performance stand out."

Shakir-Ricks, who was a member of Gahr's 4x100 relay that placed 2nd at State last June, had three "Invitational" race wins Saturday, which was the most among athletes in the traditional events.

"Chris has been a lot of fun to to have on the team," Ballou said. "He loves to compete and had a great day." 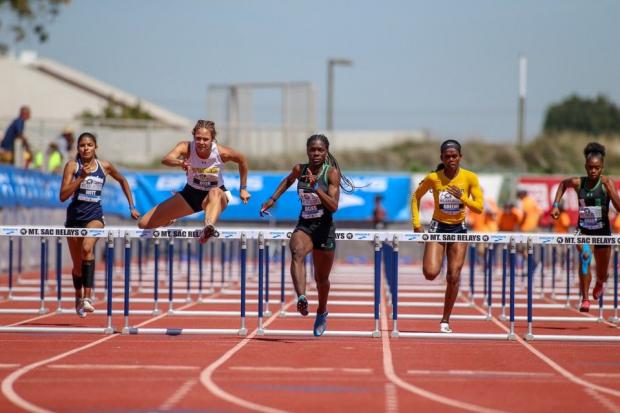 Great Oak's CJ Stevenson, looking to become a double-jumps winner for a second consecutive season, did his part in the long jump (23-09.25/3.9) but had to scratch out of the triple jump after one attempt and a post-treatment run-through for what he said was muscle tightness in his right leg. Stevenson's points in the horizontal jumps are essential to Great Oak's hopes of challenging for a CIF-State boys team title. Stevenson is the defending State champion in the triple jump. 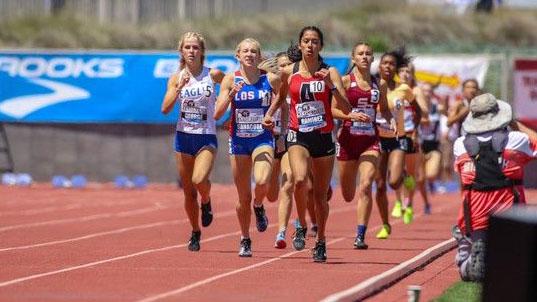 On Friday night, Ayala junior Mikaela Ramirez placed third in a very competitive mile field 4:50.00 (the top two and four of the top six times in the country were recorded in that race). On Saturday, Ramirez (Scott Padgett photo above) won the invitational 800 in 2:11.89 vaulting her from No. 35 to No. 6 in California.  Her 4:50.00 mile clocking ranks as No. 3 in CA and No. 4 U.S.

In Saturday afternoon's 800, Ramirez trailed Delaney Sanacore of Los Altamitos until winning it with a kick in the end. Sanacore finished second in 2:12.23 with Gwynn George of Santa Margarita next in 2:12.43.

Corona Centennial senior Rylee Penn, a CIF-State runner-up in the 800 meters as a freshman, won the seeded race with the best time of the day 2:11.80. It was a performance reminiscent of her first two seasons. 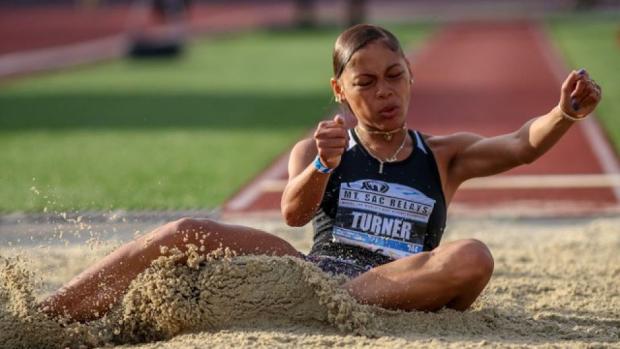 Among so many other standouts: