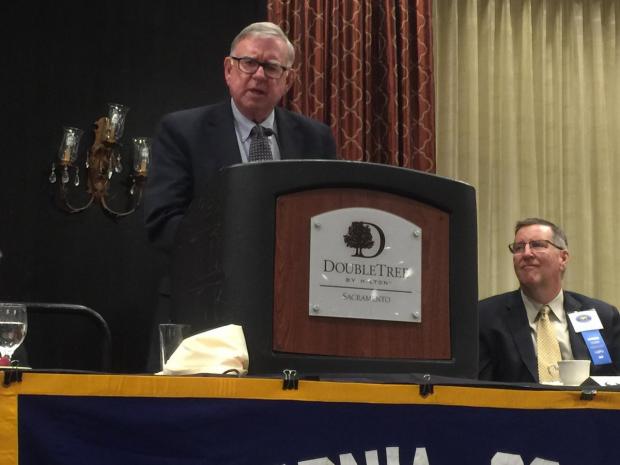 Our latest addition to our coaching legend series is longtime Yreka coach, Jim Eckman (photo above courtesy of Mitch Stephens as he was inducted in the California Coaches Association Hall of Fame in 2017). He was a government teacher, coach, and athletic director at Yreka HS from 1970 until his retirement in 2003. He was also much more than a teacher/coach as you will see below with his involvement with local politics as mayor and as a member of the City Planning Commission and  Yreka City Council. Current Yreka coach Pam Borg took over for him after spending a few years working with Coach Eckman.

"I had the pleasure of working with Jim when he hired me to be an assistant in 1998 until he retired a couple of years later.  His style of coaching was based on the expectations of hard work, positive attitudes, determination, mixed with a bit of fun from his athletes and staff. We had a lot of fun together. He started coaching cross country and track back in the early 80's. Based on what I can find, he won somewhere around 30 league and division titles. He was named Coach of the year in both sports by the northern section and was recently inducted into the Hall of Fame for the Coaches Alliance in 2017. He has mentored many athletes over the years and continues to stay in contact with many of them over the last 30 years. Since moving to Oregon, he has continued to make a positive impact on our sports by being in charge of meet logistics at the legendary Hayward Field at U of O. As a member of his Logistics team at the last three Olympic Trials and World Jr. Championships, he takes his job seriously by maintaining an organized, hard-working crew that is passionate about doing what is best for the elite athletes. He is a true professional in every sense of the word. It has been an honor working with him."

Coach Eckman's teams had four top 5 finishes at the California state meet including two third-place finishes by his 1987 and 1991 boys' teams. The 1987 (inaugural CA state XC meet) team finished behind McFarland and Robert Louis Stevenson in the Division III race and the team had a cameo role in the movie "McFarland". Below is a photo from the movie "McFarland" featuring a Yreka runner. 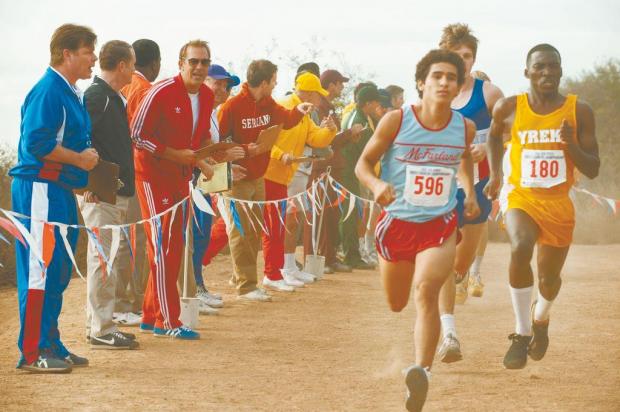 During his tenure, Coach Eckman also coached two California state Track & Field champions. Jim Frey won the mile with a time of 4:08.82 in 1983 after finishing second the previous season in 4:10.32. In 1996, Aaron Gillen won the 3200m. with a time of 9:03.96 after winning the state Division IV XC title in the fall. Gillen defeated Nordhoff's Will Bernardo in the 3200m. as he sped by him right before the finish line. Bernardo's coach was another legendary coach which we profiled earlier this year, Ken Reeves. He had this to say about his friend, Coach Eckman.

"Some facts about Jim.  Also, quick story about Jim after Aaron Gillen won the state 3200 and I guy I coached won the 3180.  With about 200 meters to go in the race, our guy, Will Bernaldo, had about a 10-meter lead.  Gillen was in second and I saw him look back at 200 meters to go. My thoughts were, he's looking to see if anyone will catch him for second.  Talking to Jim afterward, Aaron was looking back to see if the Arcadia winner (who had finished in a 56-second last lap that year) was coming.  Aaron was sizing up the situation and passed will with about 20 meters to go and won by maybe a meter.  Great race and very classy interaction after the race." 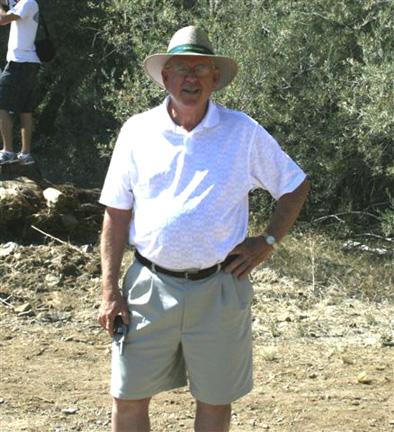 California Teacher of the Year in Politics in 1974

Northern Section Athletic Director of the Year in 1998/99

California Girls Athletic Director of the Year in 2001

Aside from his expertise in Cross Country and the distance races, Coach Eckman also had success with field event athletes although he always gave credit to his assistant coaches. Among some of his best athletes, Susan Schaap was a state finalist in the high jump in 1998 and 1999, Jeremy Moore was a 4th place finisher in the 1989 pole vault competition and Andy Connor was a 6th place finisher in the 1987 discus competition.

Former athlete Chris Harris is now the Principal at Jackson Street School (Yreka Union School District) and he had this to say about his former coach.

"I had the opportunity to be an athlete in Coach Eckman's program for 4 years in high school, but also to coach against and with him for a few years.  Coach Eckman is a coach that got the maximum out of every single athlete that took part in his program.  He instilled a sense of belief and confidence in his athletes to the point they believed they would win every meet.  Coach Eckman was a master strategist....from identifying key gaps within his team, to then fill those gaps, but then too a strategist to win track meets!  In 1987 (I believe) he won the section title with 6 boy athletes! 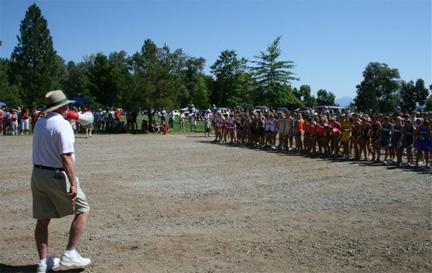