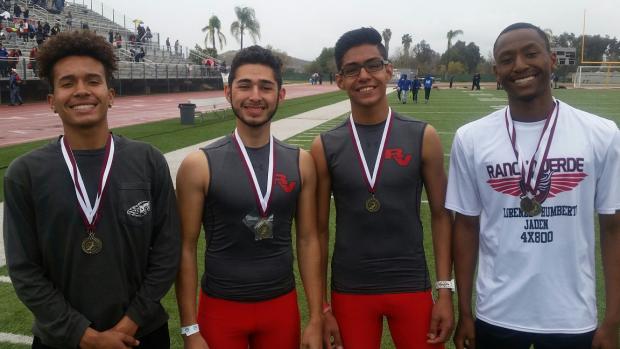 MENIFEE - A steady drizzle fell on the Paloma Valley High track and a post-season girls soccer game in the afternoon beckoned, so nobody was in a mood to prolong Saturday morning's track and field festivities.

In fact, the Paloma Valley Wildcat Relays were condensed a bit to accommodate the weather and soccer game. Nevertheless, a collection of Inland Empire teams got some quality work in before the rain started falling in earnest.

"It was OK," Rancho Verde coach Tim Callier said. "At this time of year, it's just good to get a track meet in. We didn't really have any goals for the meet or any blazing times."

Temecula Chaparral won Boys Division 1 with 62 points, Beaumont (54) was second and Rancho Verde (50) was third. In Girls D1, Paloma Valley (64) was first and Chaparral and Beaumont tied for second with 42 apiece.

"There were a few hiccups we couldn't control, like the weather," meet director Ryan Sharp said. "We also condensed the meet because of a state soccer match here today. We had some good, competitive races and we added some coed races that the kids enjoyed."

Chaparral junior Cynthia Martin was pleased to win the 3,200 in 12:20.21, although she knows she can run faster.

"I kind of took it easy," Martin said. "It was cold and rainy and I didn't want to slip. I was confident and just wanted to push through."

Martin is also getting over a mild, left ankle sprain.

Beaumont freshman Alexis Arias was happy to run a personal best of 1:03 in the 400 meters.

The Cougars' also received an impressive effort from another freshman, Grace Schwartz, who ran a 2:34 800.

Beaumont's Stacy Funderburk excelled on the boys' side. He took second with a triple jump of 40-11, a first in the high jump with a leap of 5-10 and ran a leg on the Cougars' 1,600-meter relay team which finished in 51 seconds.

"I'm impressed," Funderburk said. "I got a PR in every event. It feels good. The competition was tough and it brought the best out of me."

"I was content," Orozco said. "The weather was a factor, but overall I was happy and now we're looking forward to other meets."

"The weather was a challenge and we had a heavy week (or workouts)," he said.