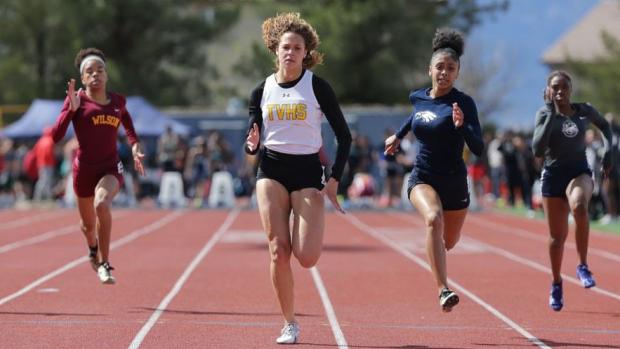 Trolling through results from Saturday and later last week, revealed dozens of marks that popped. We start with Asani Hampton's Saddle Up Invitational meet record in the 100m of a wind-legal 10.53. The Yucaipa senior headed to Michigan has been one of CA's elite sprinters since he burst onto the scene as a speedy soph and will certainly be one to watch in both the 1 and 2 all the way to the first Saturday night in June.

Hampton ran his 100m PR of 10.40 (3.8) for fourth at the State final last year and ran 10.64 for sixth at State as a soph. He has gone as fast as 20.94 in the 200m and had the fastest qualifying time in that event following the Friday night prelims at State last June. But a false start in the final denied him a chance to challenge eventual winner Isaiah Cunningham (Rancho Verde, now at Baylor) for the title.

That elite 100m heat at Saddle Up was quite speedy for early March and included a 10.63 from junior Christopher Hill (Rancho Cucamonga) and 10.84s from senior Carlton Johnson (Rancho Verde) and sophomore Lorenzo McMillan (San Gorgonio). That heat produced Nos. 1, 2 and tied for 4 in CA.

Hill later went 21.75 in the 200m, another CA-leading time for the always-fast Saddle Up.

Photos from Saddle Up by Frank Bellino

Results from Saddle Up

Elsewhere, an early March showdown in the 1600m between the top two returning girls in CA didn't materialize as expected. No worries for Davis senior Olivia O'Keeffe, who ran away from the field at Sacramento State's Hornet Stadium track on her way to an efficient state-leading 4:55.35.

"The conditions for my race were pretty perfect," O'Keeffe wrote in a Twitter DM exchange. "The rain had cleared up and it wasn't even that windy, so honestly, it couldn't have been much better."

Watch the girls 1600m at the Sacramento State Classic

"I was really happy with the race!" O'Keeffe wrote. "I didn't realize there was an adjusted time schedule, so I didn't get a chance to warm up completely and actually nearly missed the race! So considering that and how comfortable the pace felt, I would definitely say it's an encouraging opener."

Maddy and Elena Denner were originally scheduled to compete at Sacramento but they later decided against it, Maddy Denner confirmed by email. She said they are planning to run the mile next Sunday at the New Balance Indoor Nationals at The Armory in New York.

On Saturday, Wells, a 400 specialist, said he was there to work on speed and did just that, running 10.84 and 22.04, the latter in less than ideal conditions.

Check out races from the Don Green Invitational

More from Saddle Up

An extremely impressive pole vaulter put down his implement, put on his track shoes and Sondre Guttormsen had the fastest time by more than a second in the 110 hurdles, clocking 14.44. The Norwegian national who is one of the top pole vaulters among U.S. high schoolers, spoke in a pre-season interview about how in his homeland athletes do quite a bit of multitasking. In an event that was dominated by seniors in 2017 and appears as wide open as any in either gender, this pole vaulter from Norway is now No. 1 in CA in the ... 110 hurdles.

Guttormsen wasn't the only participant at Sacramento State to post what appears currently as the top mark in CA.

Two of the state's top distance runners, Collin Ullrich (Liberty Ranch) and Matt Strangio (Jesuit), coming off outstanding cross country seasons, went head-to-head in the 1600m. Ullrich, a senior headed to Northern Arizona, won the sprint to finish in 4:23.31. Strangio, a sophomore, ran even with Ullrich for most of the race, and reeled him in after he tried to pull away at 200m only to lose the sprint at the end, placing second in 4:23.86.

Watch Ullrich and Strangio battle throughout their 1600m race

Around the Golden State

New boys state leaders in the distances came out of meets Friday night and Saturday. Roosevelt senior Raymon Ornelas (9:20.88) moved to the top in the 3200m after his performance Friday on his home track at the Roosevelt Twilight Invitational. Livermore Granada's John Bennett (4:18.50) took over the 1600m CA lead after his posting at the Dan Gabor Distance event, hosted by Amador Valley HS.

To see all of the updated CA leaders -- and there are many -- click this link.

Check out the slides below for a sampling of some of the week's marks that popped.